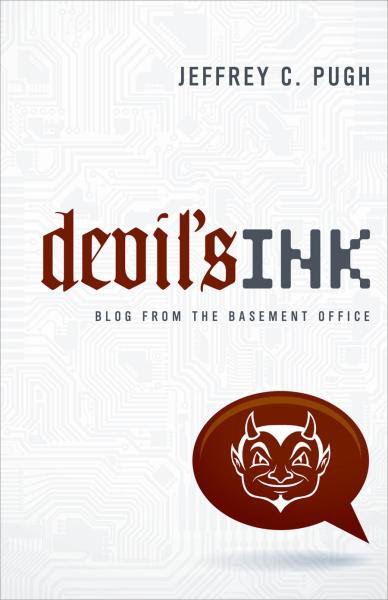 , which was supposedly a collection of letters written by the Devil to his minions offering guidance on how to deal with the “enemy.” One of the most famous quotations from the Lewis book warns against two opposing errors:

There are two equal and opposite errors into which our race can fall about the devils. One is to disbelieve in their existence. The other is to believe, and to feel an excessive and unhealthy interest in them. They themselves are equally pleased by both errors and hail a materialist or a magician with the same delight.

which takes inspiration from Lewis even if the format and theology might be different. Whereas Lewis used the letter as the basis of his exploration of the problem of evil in the world, Pugh makes use of the blog, a more modern form of communication.
The author of this book is ostensibly the Devil, but you might say that the Devil has a ghost writer in Jeffrey Pugh, a professor of religious studies at Elon University in North Carolina and author of several books, including one on Dietrich Bonhoeffer

. The Devil’s posts offer advice and direction to the Devil’s minions as they work to undermine the efforts of the Enemy – God – and the Body (Christ).
As for the author’s purpose, Pugh takes up this particular form of communication to help contemporary Christians wrestle with the problem of evil, especially as evil seeks to co-opt the church and its people. Although Lewis is an influence on this book, Pugh has done more than simply change the format. His picture of the Devil has had to change, because our understanding of evil has changed over the past seven decades. The starting point for this book is revealed in a rather succinct way in a sentence found in the opening paragraphs of the book: “Devil’s Ink

explores how evil arises in stealthy ways in popular culture” (p. xi). But, not only does he want to shine a light on the presence of evil within popular culture, he wants to raise the specter of evil gaining access to the church through popular culture – and we’re not just talking about going to movies and listening to Rock & Roll. No, we’re talking about the way that, for instance, American culture can impact the way the church sees itself and acts in the world.
In the opening blog post “the Devil” reveals that he has chosen this format because it’s important to be “flexible and innovative or we risk losing influence.” Then he goes on to say that “if there is one thing that I fear, it is losing influence” (p. 1). As we hear this word, it’s important to remember that the audience of this book is the church, not the minions of Satan. Thus, right off the bat we’re challenged to consider how easy it is for evil to get a foothold in the church, not to mention the nation in which we live. Thus, in this “introductory post” we’re warned about the dangers of seeking influence over others, for that is the “Devil’s” game. He notes he could have used Facebook or Twitter, but the blog seemed to be the best forum, and as you read the book you will agree that the blog makes the most sense for this kind of work. The postings are, for the most part, relatively long – often covering two or more pages. There is depth here that other forms of communication can’t offer. As an aid to understand the meaning of the posting, the author provides tags, which are then explained in a glossary at the end of the book. These are revealing in and of themselves.
As to how to read the book, Pugh notes that it’s best not to try to read this all at once. Remember you’re reading posts from the Devil, so take it in small bites. And as a further reminder about how this book is to be read, the Devil notes that the Minions of Hell must make sure not to let this information leak out to the enemy – “So none of you better go all Julian Assange on me or I will have you for lunch –literally” (p. 3).
The Devil begins with several postings on desire, which he says is “truly one of the best instruments in our toolbox,” (p. 5) and then moves on to such issues as suffering, the desire for control over one’s life and the lives of others, the dangers of religion and government becoming intertwined, for as the title of one blog post puts it – “Play in Caesar’s Ballpark, Play by Caesar’s Rules" – suffering and theodicy, allegiances, money, fear, terrorism, spirituality, grace and justice, torture and science, and more. There are really very few issues that don’t warrant some comment.
As for point of view – the one that lies behind the Devil’s words of advice – Jeffrey Pugh seems to be of a Hauerwasian perspective. There is a strong sense of the importance of community, and as with Hauerwas a strong suspicion of the effects of government/political entanglements. Thus, he writes that “it works best for us when they confuse the need for order with the existence of the state” (p. 86). A few paragraphs later he writes, revealingly:

The citizens of the state invest it with the power to regulate persons so they might be secure. But in order to protect them from one another, the state must assume increasing control of their lives. What starts out as something that seems so innocent will eventually end up just where we hope – in absolute control and dominance of their bodies, and if all goes well, their souls (p. 87).

But, while government ultimately is useful to control the soul of the person, it is not alone in its ability to use violence for its own purposes – religions have shown themselves quite able and willing to resort to violence to pursue their own purposes.
In each post, the Devil reminds us that we are susceptible to influences that are cunning and resourceful. One needn’t fear the presence of a demon hiding out under every rock, but one should be and discerning and perceptive. As Jesus said, you should be as innocent as doves and wise as serpents. In the end, however, the point of contention is not the presence of the Devil, but our perception of God’s absence. The “truth of this story” concerns the reality that what drives our modern world is the fact that humanity lives as if God is absent. And thus, this means that humanity falls into the waiting hands of the Devil. He writes:

What is even better, from our perspective, is that the gods they do create in their religions to justify their orders are locked in violent struggle with one another. Many of them think that the other’s deity is a threat to their worlds. They may be right (p. 168).

Thus, whether we live as if God doesn’t exist or use our religions to justify violence, either way the Devil wins!
As Lewis noted, we need to stay away from the two extremes – one in which we focus all our attention on finding the demons under the rocks and on the other hand living as if evil is not even present. The truth is, evil is present and it does on too many occasions find its way into the life of the church. Thus, even if one doesn’t find every posting to be of relevance or in accord with one’s own perspectives, most readers will find much of value in these relatively brief postings.
The author has taken great pains to root these postings in a cogent and coherent theological foundation, and as for the Devil, whether or not you believe in a spiritual-physical being known as Satan (the Devil), I believe that you will find this to be a worthwhile read. That issue is rather beside the point, because in this particular book, the Devil serves as a personification of the kinds of evil that we face in our daily lives. In fact, by focusing on the “physicality” of the Devil, would likely lead us astray and keep us from hearing a word directed to ourselves. Thus, if you choose to read this book, you will experience something that is entertaining and innovative, while be exceedingly serious as well. If Lewis provided the church with a classic text in the 1940s, perhaps this will be a new classic for decades to come.


My name is Bill Hawthorne and I am a political blogger. Just had a question about your blog and couldn’t find an email—please get back to me as soon as you can (barbaraobrien(at)maacenter.org)

bdkane said…
I thought your comments on this book was interesting in light of the book you just wrote on the Lords prayer and what it actually calls us to do/be. I have often wondered about the presence of evil myself. Anyway it looks like this book "Devil's Ink" should be interesting to read. Bev Kane
3:38 PM