The Reward of Being a Welcoming People -- A Sermon 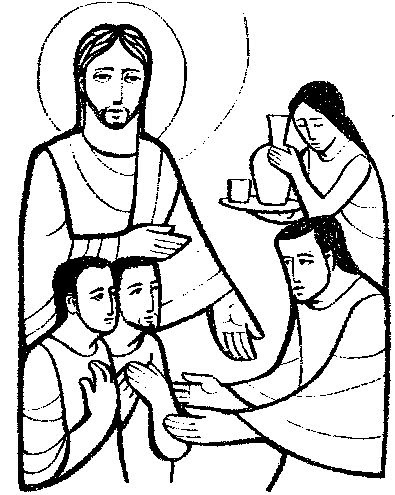 
In his book The Hidden Gifts of Helping: How the Power of Giving, Compassion, and Hope Can Get Us Through Hard Times

, Stephen Post suggests that the “recipe for living a rich, less stressful, healthier, and more meaningful life than you thought possible . . . [is to] give of yourself to someone else” (pp. 27-28).

The responses I heard from the Peace Week mission teams and from the congregations who helped support their work, such as by providing meals, confirm this observation.  Not only were the recipients of this help blessed, but so were the givers of help.   That is, giving and receiving help is circular – you give and you receive and you give again, and in this relationship between giver and receiver, there is great reward.

In this morning’s reading from the Gospel of Matthew,  Jesus debriefs his disciples after they have returned from a mission trip. He seems to want to know how they were treated.  Hopefully when the teams from Indianapolis, Lexington, and Lincoln Road, were asked how they were treated by the folks in metro-Detroit, they could give a positive report, because as Jesus says – how they receive you is how they receive me, and the one who sent me.

The mission trip under discussion involved the twelve disciples being sent out in pairs.  Jesus told them to proclaim the reign of God, heal the sick, raise the dead, and cast out demons. They weren’t  supposed to take anything with them, but instead they were to live off the generosity of their audience.  When they entered a home, they were to offer a blessing in exchange for this gracious hospitality.  And if the people to whom they went refused to offer hospitality – well, woe be unto them!

So here we are at the debriefing – something we’re going to do this Wednesday evening when Carl Zerweck and Carl Gladstone come to talk to us about Peace Week.  From Jesus’s tone, it appears that not everyone had a good experience.  But, Jesus tells them – it wasn’t you, it was me they were rejecting, and in rejecting me, they rejected God.   But if a community welcomed you, they were also welcoming me and the one who sent me  (Matt. 10:1ff).


The Gift of Hospitality

When Abraham and Sarah welcomed the three visitors to their tents at the Oaks of Mamre (Gen. 18:1ff), by offering them food and shelter, they were abiding by the expectations of their culture.   Their response stands in stark contrast to the way these same strangers were received by the people of Sodom and Gomorrah.  Lot and his family did the right thing, but their neighbors tried to rape and kill the strangers, and as a result suffered the judgment of God for failing to abide by their covenant obligations.

There’s a principle at work in these stories that was very prominent in the ancient world. You should treat the stranger well, because you might be entertaining “angels unawares.”  As it says in Hebrews:  “Don’t neglect to open your homes to guests, because by doing this some have been hosts to angels without knowing it” (Heb. 13:2).

Maybe that’s why we read so many stories in the Bible about people and communities practicing hospitality.  They knew that in welcoming the stranger they were welcoming God into their homes.  How do we see the practice of hospitality in our own lives – both at home and at church?

Remember when we laid out our core values more than two years ago.  We decided that two of them should describe us as being a serving and accepting congregation.  But what does this require of us?

Everything I read these days says people are seeking spiritual things, but they don’t think that the institutional church has answers to their questions.  Even if they’re open to the possibility that God could be found residing in our churches, they’re not all that hopeful that this true.

In the gospel reading Jesus says that the way in which people receive the message that we’re called to share is a sign of their receptivity to the things of God.  But I’m wondering if after two thousand years we shouldn’t turn this passage on its head, so that the question isn’t whether we’re being welcomed into the lives of the recipients of our message, but whether we’re willing to welcome the stranger into our lives and our communities.  That is, could it be possible that God is present in the stranger who comes to us?

We are, of course, an extension of that ministry, even as we embrace the call to be a missional congregation.  To be such a congregation also involves being a welcoming community.  But are there limits to our hospitality?

Remember what Doug Pagitt shared with us in February about his congregation in Minneapolis?  About how the two young women who found a home in that community, even though one of them didn’t know what she believed about God and the other saw herself as an atheist.  Although Doug and his church don’t shy away from proclaiming Jesus as Lord and Savior, these young women found in that congregation a place of welcome and safety and spiritual wholeness, even if they weren’t ready to embrace the whole of the Christian faith.

Being a welcoming people is more than an abstract principle.  It’s more than words on paper.  It’s about real people and real lives.  In her closing sermon at the Streaming Conference at Rochester College last month, Katie Hays  suggested that all the directives found in the Letter of James about the use of the tongue and showing favoritism to the rich while neglecting the poor, and even the directive to call on the elders when you’re sick so that they might pray for you, suggests that this letter is written to a “pre-missional” community.  They have too many issues to work through before they can invite the world into their lives.  That is, they hadn’t yet learned how to welcome each other, so how could  they hope to welcome the stranger?

Are we ready to go into the world bearing the message of God’s reign?  Are we a pre-missional community?  Or are we a missional one?  That is, have we become a truly welcoming people?    And are there limits to our welcome?
What about people who speak a language other than English?   Or whose race, religion, or culture is different from the majority of our members?   What if their theology is a bit different from ours?   Or their taste in music?  Maybe it’s more Jayzee than Bach.  Indeed, what about the generational differences that are present in this very congregation?  And of course, there’s the matter of sexual orientation, which we don’t talk much about, even though it’s a major topic in the broader culture.

What does it mean for us to be a people who are truly welcoming of others?

Jesus says that in welcoming others, he is welcomed, and when he is welcomed God’s presence is affirmed and welcomed.  In this there is great reward.