Worshiping the God who is Trinity 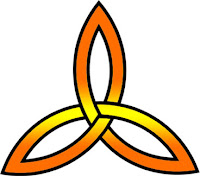 Trinity Sunday is on the horizon, though being Disciple, which is non-creedal in orientation, we’ll be placing less emphasis on this defining doctrine of the Christian faith.  Although there is a version of the Nicene Creed in our hymnal, I think it’s there more for other buyers than for Disciples who rarely if ever make use of it.  After all, one of our founders (Barton Stone) tended toward Arianism.

Now, I am by confession a Trinitarian, but I recognize that not every Disciple is a Trinitarian.  Indeed, not everyone in the congregation I pastor would affirm the doctrine, so even though I’ll lift up the Trinity on Sunday, I will do so with a degree of circumspection.

While the Trinity is a defining doctrine, my guess is that most Christians have little understanding what it means.  In fact, my guess is that many folks are tri-theists, at least in their practice.  That is, they end up with three Gods.  That may be as heterodox as unitarianism in Christian circles, but in practice we tend toward those two poles.  But if we struggle with the doctrine of Trinity, it remains a stumbling block in our conversations with our monotheist relatives in the Jewish and Islamic communities.  They hear us claim to be monotheists, but they have real doubts.

My thoughts on the Trinity in light of these interfaith conversations have been piqued by my reading of Miroslav Volf’s new book – Allah: A Christian Response (Harper One, 2011).  I’ll be writing a full review when I finish the book, but the important point that Volf makes here is that normative Christianity denies about God what the Muslims deny.  Normative Christianity affirms that God is Father, Son, and Holy Spirit, but God is one and that is foundational.   What is important here is that the God Christians worship is the same as the God whom the Muslims worship.  If not, especially if Christians affirm the Trinity as part of our understanding of God (recognizing that not all Christians see themselves as Trinitarians), then can we say that we worship the same God as the Jews?

So, however we understand the Trinity, can we with our Jewish and Muslim friends affirm what they affirm – God is One – and deny what they deny – that there is a God other than God?  With this question posed – I will post later on ways in which we might envision the Trinity without crossing over into tri-theism, which ultimately is polytheism.
Email Post
Labels: Disciples of Christ God's Nature Heterodoxy Islam Judaism Miroslav Volf Trinity Trinity Sunday Worship

David said…
Do you think God's leaky Jesus/Spirit side is any easier for a Muslim to understand? It's a mystery.
9:48 PM

quran said…
Do you think Christianity and Islam have any confusions , pr they need to be compared. Quran recitation and bible reading is both totally different, the way , the styles, the rules, every thing.
6:11 AM

Brian said…
It helped me to learn that the Trinity was developed to help explain Christology. It made sense to the thinkers of the time. Unfortunately it became a required belief instead of an intellectual tool.

Barton Stone stated that if something interfered with the joy of prayer, it should be discarded (by the individual, not the group). My impression is that he was not opposed to trinitarianism so much as he found it to be unhelpful. Regardless, this didn't sit well with Alexander Campbell!
7:14 AM

Brian said…
Clarification: I am aware that Bob and many readers of his blog are more knowledgeable of Christian history than am I. When I post it is not because they don't know these things, but because I find history to be fascinating! Besides, maybe somebody reading today will learn something new.
7:22 AM

I am with Stone, God cannot be contained or described by a human doctrine. A best doctrine is like an impressionist painting, suggestive but not defining. If the doctrine is helpful to worshiper, then fine use it, but if it is a hindrance, a worshiper should not allow it to become confining.

How can the totality of God be reduced to three...or one...or be described by any numerical value at all? I am neither a trinitarian nor a unitarian. To doctrinally ascribe a numeric value to the personages or manifestations of God is tantamount to saying that because Jesus had two brown eyes God has two brown eyes.

If the Trinity contributes to the focusing of one's worship of the authentic God then terrific, use the images it suggests. But be careful not to render the images into idols.
10:35 AM

read quran said…
worship is necessary act on every person for spirituality.
6:36 AM