Is Mayor Daniels in the Lion's Den? 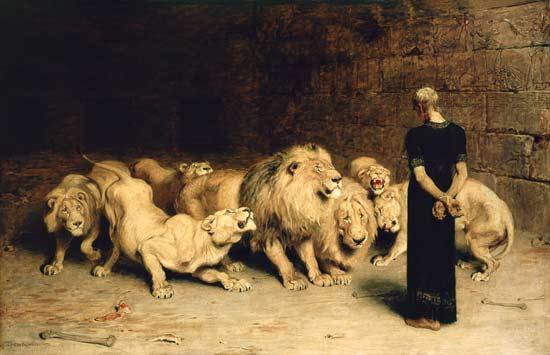 Reposted from the Troy Patch:
I received in the mail today [Friday] a political mailer from the opponents of the Mayoral recall effort.  Now, I probably wouldn’t be writing about this here, except that imagery on the mailer demands a response.  As I make this response I need to say up front that while I am a local pastor, in this case I’m speaking here as a private citizen.  And I will also note that while I did sign the petition to recall the mayor and will vote for her recall, that’s not why I’m writing today.  The reason I’m writing today is the use of the story of Daniel in the Lions’ Den to describe her situation.
There is great power in using religious imagery for political gain.  It works because we know these stories.  We may not remember the context, but we get the gist. So, what is Janice Daniels comparing herself to Daniel and City Hall to the Lions?  If you know the story, Daniel was a Jewish man who had gained notice among the Persians for his wisdom and ability to interpret dreams.  He rose to a high position in the government, and jealous members of that government hatched a plan to get rid of him.  So, they convinced the king to create an idol and require all citizens to bow before it on the penalty of death.  They did this because they knew that Daniel, being a righteous Jew, would never bow to such an idol.  When the day came, he did refuse, and though the king was displeased by this turn of events, he had to execute Daniel by throwing him to the lions.  Now, God intervenes and Daniel is spared, and then the king causes his enemies to suffer the fate they intended for him.  That is, they and their wives and children are thrown into the Lions’ Den, where they are killed.
As I retell the story do you get a sense of the story that Janice Daniels wants to tell us?  Do you not hear her saying to us as the citizens of Troy, that she is the righteous one?  She is simply doing the work and will of God here in the city.  Unfortunately there are evil partisans lurking in City Hall, who are seeking to do her in.  And who are these evil partisans?  It’s the employees of the city from the City Manager on down who, along with their “extremist” friends, have plotted to do her in.  But there is good news, because she is righteous and is standing up for the things of God, which appear to be new taxes and promising to maintain services like libraries and snow removal without raising revenue, God will deliver her.  And how will God deliver her from her evil enemies, she believes that the voters will follow God’s leadership and deliver her from the mouths of these hungry lions.  I’ll leave the rest up to your imagination – that is the fate of her enemies.
The reason I decided to speak out is that I saw the mayor using biblical imagery inappropriately.  She’s drawing the line between good and evil and putting herself in the middle.  Whether or not you agree with the mayor on taxes or even gay marriage isn’t the point.  Ask yourself why she’s using this kind of imagery; why is she holding herself up as the righteous victim of evil plotters.  I think this raises question of character that need to be taken into consideration.  I’m also speaking out because she is attacking the men and women who work hard – the “big government bureaucrats” at city hall that make sure our streets are plowed in winter, safe and secure day and night, provide educational and recreational services, attract businesses to the city, and more.  The mayor doesn’t do this work.  She’s running the city.  She’s one vote on the City Council.  But the people who work for the city, the people who work for us, do so as efficiently and as effectively as just about any city work force, which is why this city is honored by Money Magazine as a great place to live and work.
The use of this imagery raises questions as to whether she can work effectively with the employees of this city, including the new City Manager.  Therefore, it’s up to us, the voters of this city to decide whether she is fit to serve in this important symbolic role on our behalf.  Although the mayor doesn’t run the city, the way the city is perceived both inside and outside the boundaries of the community is often reflected by how the mayor is perceived.  And as for me, she is not the righteous victim standing up for the things of God – whether or not I’m in agreement with her political views.
Email Post
Labels: Good and Evil Iconic Faith Janice Daniels politics Religious Imagery Troy Michigan Troy Patch