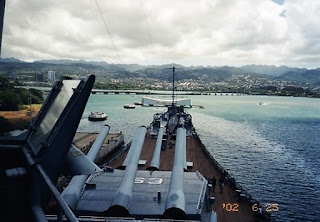 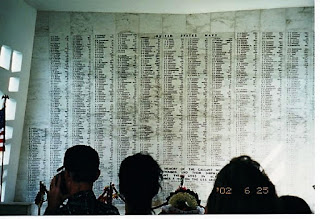 It was 75 years ago today that a force of Japanese naval bombers hit Pearl Harbor, drawing the United States into World War II. Thousands died that day, and many thousands more in the years to come. Franklin Roosevelt called it a "Day that shall live in Infamy." Unfortunately it was not and will not be the only day of infamy to strike our world. War is something that has as yet not been overcome. We have yet to turn our swords into plowshares.

I have been to Pearl Harbor twice, both times we visited the Arizona Memorial. The second time around, we also visited the U.S.S. Missouri, the battleship upon which the Japanese surrender was signed. In the picture above you  can see the Arizona Memorial from the deck of the Missouri. To the right you will find the names of those who died that day, those entombed in the waters below the memorial.  Below is what remains of one of the stacks. 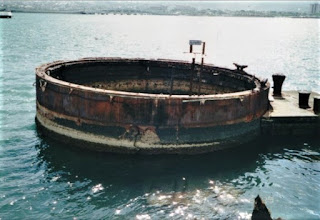 During my ministry in Lompoc, I had a parisioner who was a survivor of the Arizona. I heard his story. He was fortunate that day, but many of his shipmates were not. A few years later, my father would serve in the Navy, at the conclusion of this war.

When you go out to the memorial you may get, as I did, especially the first time I visited, this eerie sense. If you pay attention, and keep quiet, you will sense that this is a sacred place. It is a call to remember those who died, much like the Vietnam Memorial Wall.

I share a few pictures that I took in 2002, so that you might join me in remembering those who died that day. I would ask that you also pray that we would learn how to keep from repeating the past, so that peace might be made known.
Email Post
Labels: Anniversaries Pearl Harbor Remembrances U.S.S. Arizona Memorial