Responding to a Weekend’s Violence 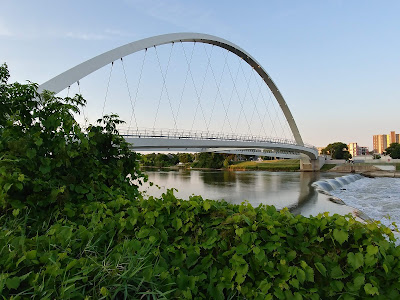 It is now a few days into a new week that follows a weekend of violence in two American cities. Much has already been said. I'm not sure what I can add at this point other than simply to add one more voice to the conversation.

I am a preacher by trade. I want to preach the Gospel of Jesus Christ when I enter the pulpit on Sunday morning. I want to offer words of encouragement to people who have their own struggles in life. Many are older, and deal with health issues and wonder about their future mobility. Others are younger and wonder what the future holds, especially in light of burdensome student loans. I would rather not have to speak to the reality of constant violence in our communities. We talk about the insufficiency of thoughts and prayers, but I wish I didn't have to offer thoughts and prayers for communities suffering from the violence that seems in recent years to be stoked by fear of the other.

I decided to wait a bit before offering a fuller reflection, though I've spoken in small bits before now. As a preacher and as a human being, I find myself distressed by the fact that it has become commonplace for weekends to be interrupted by reports of violence, particularly gun-related violence. In the past few weeks, we’ve witnessed a number of mass shootings, from Gilroy, California to Dayton, Ohio. This past weekend there were two mass-shootings. One in El Paso, Texas, where people of Mexican ancestry and citizenship were targeted. The other shooting was in Dayton. At this point, we don't know all the details, but the reality is that violence shook our nation once again. One of these shootings took place in the morning, in broad daylight, at a Walmart (the second mass shooting at a Walmart in the past week), where families were gathered to do some shopping, perhaps in preparation for the upcoming school year. It was a sales-tax holiday sale. Children were out front raising money for their soccer team. In other words, it was a day for families to get out and about. The other shooting took place in the wee hours of the morning at night at a local gathering spot for fun and entertainment. Both locations were considered safe spaces.

Both of these shooters were young white males. One of them rooted his violence in anti-immigrant and anti-minority rhetoric. In his "manifesto" he spoke of an invasion from the south, parroting the words of the President of this country. I don't know the motive of the second shooter, except to note that his sister was among the victims.

In this reflection, I want to focus on the first of these two mass shootings, the one in El Paso, because we have a better sense of its motivation. We know that a young man from suburban Dallas drove over six hundred miles to El Paso. He has been upfront about his motive. He went to this community that is 80% Latinx,, for the specific purpose of killing as many Mexicans as he could. He picked his target specifically because it was well known that many people of Mexican descent, including cross border visitors, came to this store to shop (I heard that seven of those who died were residents or had been residents of Cuidad Juarez. The shooter carried with him an assault-style weapon with a large magazine designed to kill as many people as possible. Right before he arrived to carry out this slaughter of the innocents, he posted an anti-immigrant, anti-Latinx manifesto that explained in detail his purpose in going to El Paso. Already he is being hailed as a martyr for the cause of white supremacy.

While I think that more sensible gun laws, including background checks (and for my money, reimposing the assault weapons ban of the 1990s), will be of use, we need to dive deeper into the cause of these outbreaks of violence. We need, first of all, to choose the right labels. This didn’t happen because people play video games. I know a lot of gamers, including my son. This is not the cause. It has nothing to do with prayer in school or the lack thereof. I didn't pray in school back in the 1960s and 1970s. My mother didn't pray in school back in the 1940s. That lack of prayer in the schools didn't incite gun violence. As for mental health concerns, whether or not these two killers were loners or had mental health issues, there are many shy, introverted folks, who might have mental health issues, but they don't go killing people for sport. So let’s not stigmatize people with mental health issues or mental illness. Let’s be careful with our “diagnoses.” While social media may contribute to the spread of racist and violent ideology, it is not in itself the cause, any more than the media is the cause. The El Paso shooter didn't share his manifesto on Facebook or Twitter, but on a much more off the radar site known for sharing hate-filled diatribes.

No, there's something deeply wrong in our culture right now. One of those contributors is the fear of the other. More specifically it is an ideology of white supremacy and white nationalism. I am white. My ancestors came here from Europe. My maternal grandfather came here from Holland. I have ancestors who came from England, Scotland, and Ireland. Some came in the seventeenth century. Others in the 19th and then 20th. My ancestors contributed to the complexity that is this nation. In the course of time, others have arrived, contributing to this complexity. Of course, there are those whose ancestors were brought here without their permission to be slaves. Then there are those whose ancestors were already here, inhabiting these lands. They watched as their lands were overrun by new immigrants from Europe, who then brought with them slaves of African ancestry to fuel the economy.

As we move further into the 21st century, demographic changes are causing many folks of European ancestry, who have dominated the country for the past three centuries, to fear that they are losing control of "their" nation. The fact is, this nation is changing. The question is, will we resist or will we welcome the changes. The choice is ours. As I've noted, some of the violence, like that in El Paso, is rooted in fear of the other and a desire to resist change. There are also those who are capitalizing on this fear for political gain. Among them is the President of the United States who speaks of an "invasion" on the southern border, who otherizes people for his own gain. We must not fall for this ideology. We must choose a different path.  This means addressing the real and present danger of domestic terrorism rooted in white supremacist ideology, which is often abetted by White Christian nationalism. We must say no to the constant refrain that speaks of the nation being invaded from the south or the use of the word infestation to speak of our urban centers. This only furthers the cause of those who would foment violence against people who are different from them.

I used a picture of a bridge over a river at the head of this reflection as an invitation to chose a different path, one that seeks to build relationships across our diversity. Being a diverse nation is not easy, but there are great benefits that come to us because of that diversity. We just have to decide what path we will take. Will it be resistance or will it involve bridge-building?

I recognize that prayers are not enough, though prayers are required. We who are people of prayer, need to recognize that our prayers must be accompanied by actions. We need to hold accountable those who foment hate, even as we seek to refrain from falling into hateful speech and actions ourselves. For those of us who are people of faith, we can partner with others who might be different from ourselves. We can listen to the voices of those whom the world often rejects and neglects. We can build bridges across the divides in our communities. It won’t be easy. But it’s essential. Part of the process involves those of us who benefit from our European heritage and our male gender, admitting that we benefit in ways others do not. When we do this, we can move forward prayerfully. With this in mind, we can hear the words of Isaiah, which emerge from this coming Sunday’s lectionary reading. I believe they are fitting for the moment (Isaiah 1:15-17 NRSV).

When you stretch out your hands,
I will hide my eyes from you;
even though you make many prayers,
I will not listen;
your hands are full of blood.
Wash yourselves; make yourselves clean;
remove the evil of your doings
from before my eyes;
cease to do evil,
learn to do good;
seek justice,
rescue the oppressed,
defend the orphan,
plead for the widow.

Unknown said…
Diversity is a weakness, not a strength. America is divided by race, language, religion, worldviews, and culture. Leftists want a different kind of country than do conservatives. It is not possible for the two sides to live together in peace. Either the country will find a way to divide, or the civil war will continue.
11:52 AM