Who's Who In the Bible (Jean-Pierre Isbouts) -- A Review 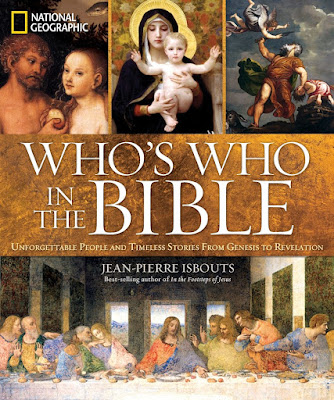 WHO’S WHO IN THE BIBLE: Unforgettable People and Timeless Stories from Genesis to Revelation. By Jean-Pierre Isbouts. Washington, DC: National Geographic Society, 383 pages.

The Bible is a sacred book venerated in its various forms by Jews, Christians, and even, to an extent, by Muslims. In it, we find stories that have spoken to millions of people down through the centuries concerning matters of faith. Within its pages, one finds narratives that include history but also myth or perhaps better saga. There is poetry as well as prayers that inspire, comfort, and encourage people in their daily lives. There are letters and apocalyptic texts. In a book that covers more than a thousand years of history, you would expect to encounter lots of names, places, and even dates. When it comes to the people, we might know some of the names, like Adam and Eve, Moses, and Jesus. But what about Hagar, Jochebed, Jehoiakim, and even Mary Magdalene. Those are just a few of the names one will encounter, so perhaps a dictionary of names would be helpful. If those names were put in a narrative context, wouldn’t that be even better? Well, that’s what you get in Jean-Pierre Isbouts’ Who's Who in the Bible, a beautifully illustrated tabletop book published in 2013 by the National Geographic Society.
This book, which was written by Jean-Pierre Isbouts, a humanities scholar at the Fielding Graduate University in Santa Barbara, California, is the subject of an effort to reintroduce it to those who might not know of its existence, but who would find it a valuable resource. So, they partnered with TLC Book Tours to get the word out, and I was asked to participate in this effort. It seems appropriate that I get to share this word during Holy Week for Western Christians (Eastern Orthodox Churches will celebrate Easter this year on May 2), shortly after Jews have observed Passover. In other words, many within the Jewish and Christian communities have a heightened sensibility about matters of faith.

The book will sit nicely on a coffee table, where it will beckon one to pick up and explore its contents. If you know anything about the National Geographic Society you know that their publications include wonderful photographs and maps. You won’t be disappointed here. The book includes four hundred full-color photographs of artwork, artifacts, archaeological sites, and more. These photographs help illustrates the telling of the biblical story. There are also numerous sidebars and family trees (do you want to know who is who in the family of the Maccabees?) that provide background information to the story. These take the reader deeper into the story being told in the narrative. There are montages of art and artifacts that are linked to each chapter of the book, and again these are in full-color. Then there are the numerous maps that can be examined. Finally, there is the timeline that runs throughout the book that sits at the bottom of each page in the chronological narrative section. Each chapter includes a dictionary that identifies every figure discussed earlier in the narrative. This is a helpful contribution that will prove useful for Bible readers who want to know who is who in the story. The point though is to help the reader get a sense of the progression of the story from creation to the end of things.

Isbouts uses a chronological narrative to move the reader forward from creation to the ends of things. He does so by dividing the book into five chapters. The first three chapters take the reader through what Christians know as the Old Testament. We could use the title Hebrew Bible, but he includes elements from the Septuagint, which was written in Greek. Then, comes the exploration of the New Testament. Chapter One focuses on the Pentateuch (Genesis to Deuteronomy). Chapter two tells the story that begins with Joshua and continues through the story as told in Kings. The Prophetic books appear in their appropriate place in the chronology.  Chapter three Takes us from Chronicles to Maccabees. Essentially this covers the period from the Babylonian Exile to the Maccabean restoration. Chapter 4 introduces us to the four Gospels and the story of Jesus. Finally, in chapter 5, Isbouts covers the rest of the story, from the Book of Acts through Revelation.

This is a book written for the general reader. It is based on solid scholarship, but the author has written this book, as one would expect from a book published by the National Geographic Society, from a nonsectarian vantage point. The readers are expected to be Jewish, Christian, and non-religious. Overall, it reflects solid, mainstream scholarship. If you are conservative in your theology you might find his findings not to your liking, but this isn’t designed for a specific religious perspective. You might say that he attempts to take a more secular perspective. So, for instance, when it comes to the authorship of the Pentateuch, he notes that Moses is the traditional author but that most scholars would disagree. So, he introduces the reader to Documentary Hypothesis (JEDP). But the point here is getting into the story itself by letting the biblical writers be the storytellers. The sidebars, however, often deal with the stickier issues. In all the book covers a lot of territory. It’s comprehensive but not exhaustive. It’s based on solid scholarship but isn’t written for the scholar.

After the five chapters that focus on the biblical story, Isbouts provides a brief epilogue that introduces the reader to the ongoing story of early Christianity and the origins of rabbinic Judaism after the fall of Jerusalem in 70 C.E. This epilogue takes us briefly through the history of the Holy Land, including notes on Byzantine-era Jerusalem and Crusader Jerusalem. Again, all of this is richly illustrated.

Having taught Bible studies in churches for a long time, I am time and again asked questions about the identities of figures in the story, about the historical context, and the overall narrative. I realize that the Bible is in one sense an anthology of sacred writings produced over many centuries and the authors are human beings who reflect their cultures. Nevertheless, there is a narrative, or so it seems to me, that connects everything. Not perfectly, but there is an overall arc to the story, and a book like this helps the reader get a sense of the narrative and its components. For the general reader, I can’t think of a better place to start than this book. So, for all those who find it difficult to put everything together, who struggle with the overarching narrative that makes up the Bible in all of its historical and religious variety and diversity, check it out. If nothing else, the photographs, especially of the artwork, are worth the price of the book. I do have one caveat. That has to do with the focus on Eurocentric art. There is greater sensitivity today to the need to reflect the broader stream of perspectives. That’s not to say that the art portrayed here is not worthy of being shared, but perhaps a future edition could include a greater variety of art to the reader. Other than that, those who pick up Isbouts' Who's Who In the Bible will enjoy it and maybe gain a better sense of this Bible and the people, whether well-known or not, who participate in the story.