One Flock, One Shepherd -- Lectionary Reflection for Easter 4B (John 10) 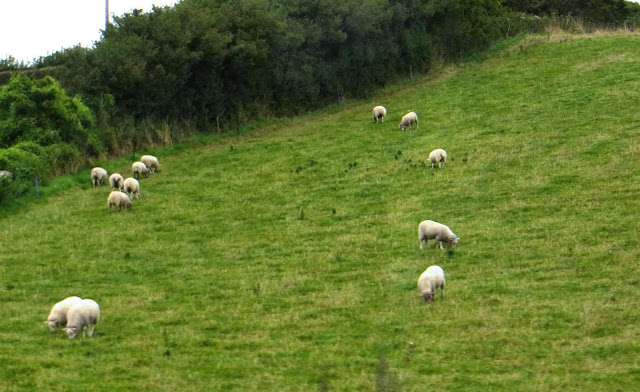 
11 “I am the good shepherd. The good shepherd lays down his life for the sheep. 12 The hired hand, who is not the shepherd and does not own the sheep, sees the wolf coming and leaves the sheep and runs away—and the wolf snatches them and scatters them.13 The hired hand runs away because a hired hand does not care for the sheep. 14 I am the good shepherd. I know my own and my own know me, 15 just as the Father knows me and I know the Father. And I lay down my life for the sheep. 16 I have other sheep that do not belong to this fold. I must bring them also, and they will listen to my voice. So there will be one flock, one shepherd. 17 For this reason the Father loves me, because I lay down my life in order to take it up again. 18 No one takes it from me, but I lay it down of my own accord. I have power to lay it down, and I have power to take it up again. I have received this command from my Father.”

********
One of the most beloved of Christian images is that of Jesus the Good Shepherd, a metaphor that we see developed by Jesus in John 10. When we read this passage, we do so in light of other shepherding images as well—most especially the words of Psalm 23 (the Psalm for the day): “The Lord is my shepherd, I shall not want . . . .” When we read this Psalm we often think of David, the Shepherd King—the psalm’s traditional author. Since Jesus is seen in Christian tradition as the Son of David, the one who takes up the Messianic throne, the shepherding image has taken an important place in Christian life.  Indeed, the title pastor that many of us in ordained Christian ministry make use of is rooted in this context. That is, the pastor is the shepherd, with the church being the flock.


It is a common metaphor for Christian ministry, but we might want to be careful in our use of this shepherd/sheep imagery. As Lillian Daniel reminded us in her message at the 2015 Festival of Faith (a gathering of Michigan Disciples and United Church of Christ folk), God is the shepherd, and we are all sheep. We get in trouble when we begin to think of ourselves as shepherds (whether clergy or lay leaders), thereby ending up as the hired hand. Thus, we might want to be careful with our use of this image!

This reading from John 10 falls within the Easter cycle, and the reason it was chosen for this day may have to do with the statement found in verse 17. There it says that Jesus lays down his life in order to take it up again. He is the good shepherd who is willing to lay down his life for the flock (Good Friday) but then he takes it up again (Easter). That he laid down his life was not an act forced upon him. This was a decision he made of his own accord, but in John's mind, it was done with the intention of taking it up again. This reference will lend itself to a reflection on the relationship of the cross and resurrection that is fitting for the season, but there is more here than that message.

It is the word found in verse 16 that stands out to me. Here Jesus speaks of another flock that he intends to bring into the sheepfold because there is one flock and one shepherd. Perhaps the reason why this verse grabs my interest is that it resonates with my interests and involvement in interfaith and ecumenical ventures. Who are the sheep in the fold, and who are those on the outside? What is interesting here is that those outside the fold seem to be able to hear the voice of Jesus, and are willing to follow. Contextually it seems appropriate to conclude that Jesus is talking here about bringing the Gentiles into the church. Therefore, those inside the sheepfold would be the Jewish Christians. At the time that John writes this Gospel, the transition from a Jewish-dominated church to a Gentile one is well underway. Debates had erupted as early as Paul’s ministry as to how this was going to work. The tensions are present in this dialogue, but the message is that there is but one flock and one shepherd.

Since the church today is essentially a “Gentile” community, the debate over whether it is possible for a Gentile to enter the church has long since been resolved. But, we continue to struggle with the question of who is in and who is out. The Christian world is rather diverse, with thousands of different versions. Down through the ages attempts have been made to determine who is “orthodox” and who is not. But who gets to decide?  If we say Jesus, which works for me, on what basis does he decide who to include and who to exclude? What is the criteria on which judgment is made? If you listen to “conservative” Christians, it’s the liberals who are beyond the pale. If you listen to liberals, it’s the conservatives who simply don’t get it. In other words, it’s my job to determine whether you fit my criteria of what it means to be a good Christian.  It would seem that God dislikes the same people I dislike!  And yet, there are those other sheep who belong to Jesus.

Could it be that the other sheep include the Samaritan woman whom Jesus meets at a well and engages in a rather interesting theological conversation about worship? What about the tax collectors he has dinner with and the revolutionaries who appear to have joined his band. Then there are all the women who seem to be following him.  Besides that, there are the lepers and sick and the injured who look to him for help. Time and again Jesus welcomed into his fold those whom his culture deemed unclean.  Now it’s true that sometimes Jesus showed a more exclusive side. Consider that in on one occasion Jesus is said to have sent out the disciples on a preaching mission and he explicitly told them to avoid contact with Samaritans and Gentiles (Matthew 10:5-15). Nonetheless, his overall policy was rather inclusive.

If we begin the conversation with the Christian community itself, we might ask – who isn’t here?  Most of our churches are racially/ethnically segregated. We can rationalize this as cultural in nature, and there is truth in this (especially when language is a barrier), but still, we struggle to reach across those barriers to embrace each other as brothers and sisters. There are also economic barriers, separating us from one another—this is often expressed in terms of assumed dress codes. There are of course theological barriers—can you sign on the dotted line. In our day the biggest question facing our churches is how far we will go in members of the LGBT community in the church as full and equal members of the church. And of course, there is that question about who is included in God's realm -- especially when we're thinking of other religious traditions. How do we proclaim Jesus and include others in the family?

When Jesus says that he has other sheep that he wants to bring into the fold, who is listening to his voice? As we seek to answer that question it is good to remember that we’re not the shepherds, we’re the sheep. When we think we’re shepherds we end up becoming hired hands!
Email Post
Labels: Easter Eastertide Gentile Christianity Gospel of John Good Shepherd Inclusion Judgment Lectikonary Reflections Resurrection Sheep