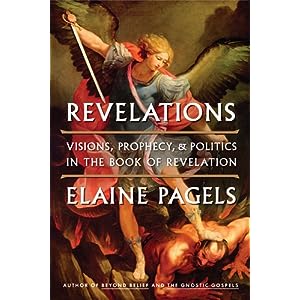 People have a fascination with the biblical book of Revelation, though many preachers try to steer clear of it.  It's a book that can lead one in many directions, not all of which are beneficial.  Many have tried to see the present circumstances in its enigmatic wording, but one must ask -- if these words define present events with great specificity, what value would this book have had for the original reader?   I'm of the mind that the book speaks first and foremost to its original audience and that it doesn't speak with predictiveness of our own situation.

Martin Marty points us to a review and excerpt of a new book about the Book of Revelation written by Elaine Pagels.  Pagels has spent her career exploring the more esoteric and non-canonical works of the early Christian period.  I've not read the book under consideration, but I expect it will prove interesting to those seeking to understand Revelation.  So, here's Marty's musings for your enjoyment and exploration!
*************************

Sightings  3/5/2012
Revelation
-- Martin E. Marty
The weekend just past found some of the oldest things in Western religion to be the subject of newest concern and debate. One instance: a book of the Christian Bible, the Apocalypse or Revelation of St. John, which is the main review in The New Yorker and the main book excerpt in The Wall Street Journal. At issue is the treatment of the biblical book by scholar (and friend) Elaine Pagels, Revelations: Visions, Prophecy, and Politics in the Book of Revelation

. It is the weirdest book in the Bible, if  taken literally—though it describes itself as a dream or a vision—but has impact on politics and culture.
So we pay attention, or at least half-attention. It belongs to the half dozen or so “antilegomenal” or “spoken against” books in the early centuries of Christianity when the leaders were forming the canon through a mix of doctrinal disputes, theological inquiries, and imperial power plays. Adam Gopnik in The New Yorker says the text made it “only by the skin of its teeth,” long buried by “the Apostolic suits” until “one key exec favored its release,” and, since, “it has always been a pop hit.” Pagels does justice to the “near miss” character of the Revelation of John that made it into the canon. She also does more justice than most to those non-canonical “revelations” whose scripts littered the early Christian landscape. It is easy to see why she is fascinated by them, but she also finds enough in the canonical book that disturbs the peace of many 21stcentury believers and many of their non- or less-believing contemporaries.
Gopnik reminds us that it is all there. It takes a long sentence to point: “666” and devils and whores and dragons and fornications and angels and demons and temptresses and codes—Pagels sees the book as a coded comment on the world surrounding the besieged Christians and not as a prophecy about traumas ahead—plus ends of the world and all the other things that may not have much to do with salvation but surely are made for TV and the movies and religious groups which exploit the fears of the understandably fearful who do not want to be “Left Behind” at the end.
Pagels always gives enough reasons for people today to be entertained by the non-canonical revelations, but she also suggests why Revelation deserves attention by us half-attentive contemporaries. She acknowledges that Christians have always twisted and torn interpretations to fit the book into all kinds of outcomes. Since the book wraps up all the things to fear into one big nightmare, she asks, why did believers who experienced the fears and suffered the nightmare turn to the strange book? “Whether one sees in John’s visions the destruction of the whole world or the dark tunnel that propels each of us toward our own death, his final vision suggests that even after the worst we can imagine has happened, we may find the astonishing gift of new life. Whether or not one shares that conviction, few moderns miss seeing how these visions offer consolation and that most necessary of divine gifts—hope.”
That may be why people in concentration camps and on death beds, and not just while munching popcorn at the “Left Behind” movies, have turned to the Revelation of St. John. Pagels teases new publics to take a fresh look at it.
References