People of Faith and the Public Square 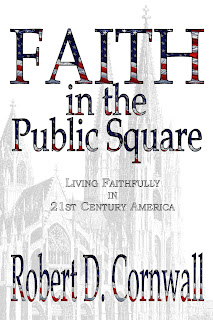 People of faith, if they choose to enter the public square, face the question of why they are making this move into public life. There are those who desire either to dominate public life through the imposition of religious law or a theological vision, whether that is Sharia, the Ten Commandments, or the Sermon on the Mount! Others hope to gain special privileges, whether that involves official establishment or some other form of support. American history shows that there was not a consensus on this question, even as the states began to ratify the Constitution.

In the essays that comprise this book [Faith in the Public Square] I hope to create a conversation that would help the nation in which I live, as well as the global society, to work together for the common good. I happen to believe that while it has its flaws, the American political system is the best system yet devised. It is a democratic system, and yet it has imposed checks and balances that have provided political stability. This is the context in which citizens, including people of faith engage each other publicly. The US Constitution allows for people of faith to exercise their faith in public. There are few legal prohibitions of religious practice in America, and the government must show a compelling reason for limiting religious speech and activity (usually matters relating to personal or public safety). Therefore, the government, according to the First Amendment, cannot either impose a religious orthodoxy on the nation or infringe on the rights of religious people to practice their faith openly. These are very important rights that bring with them important responsibilities. Therefore, people of faith must enter the public square boldly but respectfully, for there is more than one viewpoint on matters religious and non-religious present in the public square. That said, from the perspective of faith, one must ask the question – what kind of world does my faith tradition envision and how should a person of faith seek to bring this vision to fruition?

As we seek to understand how this question of vision is worked out in public, we must remember that this is a pluralistic democracy and that the players in the public square must respect the rights of the other. There are rules that govern our engagement with the public square. Sometimes we may decide that the issues closest to our hearts require us to trespass the boundaries, and be willing to suffer the consequences. The notion of nonviolent civil disobedience is a recognized form of expression in our society, and without it the Civil Rights Movement would never have achieved the results it sought.

I would argue that religion has an important role to play in public life, because in its institutional forms at least, religion is a public entity. It is a public space where people come together, linked by a common faith, but generally emerging from outside a particular family grouping. It is a public space where people can join and leave if they choose. Some religious communities are more engaged with the public sphere than others, but all have a place in public life. As a public entity, my belief is that each faith community has an opportunity to contribute to the common good of the nation and the world. That is, if we believe that faith transcends family and nation, then it calls us to embrace the good of the entire creation.

Excerpted from the introduction to my recently released book:
Faith in the Public Square

I don't know if this the place to raise tjis question, but the "public square" issue which piques my interest the most has to do with what factors distinguish the respective political expressions of 'conservative' Christians and 'liberal Christians.'

How can two people, who are so deeply engaged with their faith as to feel compelled as a matter of faith, to support the conservative social agenda of a Michele Bachman or Rick Santorum, on the one side, or the more socially liberal policies of Barak Obama? Both such individuals will say they are motivated to express their positions as an expression of their faith. While both claim to be disciples of Christ, their faith convictions lead them to diametrically opposed positions regarding the role of governmental in a variety of spheres.

Are their motivations perhaps attributable to something other than their faith, and thus the linkage to faith is inreality rhetorical or perhaps just misguided? Alternatively, are their respective faith convictions so disparate that it can no longer said that they share common faith?

I often need to check my own discourse when I feel compelled to challenge the faith of a conservative because their socio-political positions appear so inconsistent with my personal convictions about non-negotiable Christian values. Conservative positions often seem utterly unChristian to me. And yet I really do not doubt that my conservative opponent is every bit as convicted of the faith-based source of his position as am I.

So how come comservative and liberal Christians are led to such diametrically opposed socio-political conclusions?
9:06 AM

The answer is probably -- life is complex. We bring a variety of beliefs with us into the public square. Some are rooted in faith and some are not. I think that if we listen to each other better we'll begin to discern which is which. For instance, what do I bring from allegiances to God that is different from an allegiance to country, which trumps the other?

I think part of our problem is that we've merged the two together and we can't figure out which is which. My sense is that our polarized positions result less from faith and more from our culture.
9:59 AM

John said…
You are probably right about polarized positions stemming from culture more than faith. But the proponents from both sides, myself included, strongly believe that our positions are mandated by faith convictions, one form the point of view of "render unto Caesar..." (I am trying to be generous here) and the other from the point of view of "the least of these..."

But my question has less to do with allegiance than with expectations: not 'what are my duties to God and country' but 'what are my expectations from God and country.' The question is what should I demand or expect from my government on the one hand, and on the other, what should my government be precluded from doing. The subtext is: how do my faith convictions inform and guide me in forming and proclaiming my answer .
10:56 AM