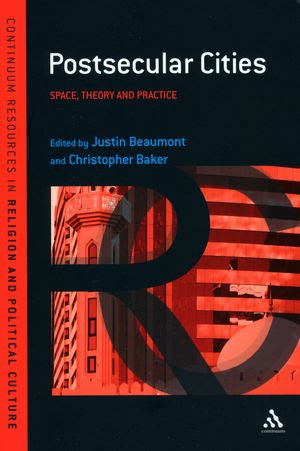 Once upon a time, Harvey Cox, a young Harvard religion professor made news by declaring the advent of the Secular City. Back in the 1960s it looked as if secularism would win the day, even if mainstream religions still seemed to be going strong. Cox read the tea leaves and thought he saw evidence of the demise of religion and the rise of secularism, and therefore, religious people needed to pay attention. Even Cox admits he read the leaves incorrectly (as seen in his recent book The Future of Faith), but religion as usual did give way to new ways of being spiritual/religious. And religion has demonstrated that it remains a strong voice in public and political life.

In the introduction to the book the editors write:

The postsecular city, by contrast to the utopian liberal uplift of the secular city (in which the role of the church and theology is to act as force of social progressive change and a cultural exorciser against all oppressive practices which reinforce hierarchies of power and dependency), reflects a more contested space where hitherto distinct categories are increasingly converging within a postmetaphysical composite. In the postsecular city, the dividing lines (and hence) roles of religion and science, faith and reason, tradition and innovation are no longer rigidly enforced (or indeed enforceable), and new relations of possibility are emerging (p. 2).

Whereas in the Secular City, the assumption was that the secular movements would define the role of religion in this new world, shaping it rather than being shaped by it, in the Postsecular City there is much more give and take. The influences go both ways, with the spiritual shaping public life, even as public life shapes the spiritual or the religious.

Those who would dismiss religion or seek to marginalize it as a relic of the past seem to have ignored reality. But, those who seek to dominate the public square completely on the basis of religion, have also missed the message - there is simply not enough homogeneity left in the system for that to happen. Things are in flux, and the authors who contribute to this volume help us understand that reality.

The editors have put together a book of fourteen essays, organized into four parts: Mapping the Theoretical Terrain; Competing Experiences of Postsecular Cities; Postsecular Policies and Praxis; and Theological and Secular Interpretations. The section titles suggest that this is written largely by academics for academics. It's not an easy read, nor will every essay be of interest to every reader. But taken together this book offers readers insight into the way in which religion and spirituality in all of its variety are influencing urban life in the 21st Century.

Although realities present in the United States come under discussion none of the contributors are American. Most are British, though some come from elsewhere in the world, from Denmark to Israel, Singapore to Canada. The rise of these "postsecular cities" is examined from a variety of approaches, from the social sciences to theology.

One of the markers of this collection is the recognition that this movement toward a postsecular reality is connected to a postcolonial reality. Many urban centers such as Vancouver or London have seen the impact of immigration from the global south. Much of the religious dynamism is a result of this diasporic reality, which makes, of course, for tension and possible problems, but also tremendous opportunities for new spiritual realities to emerge.

Being that I'm more a theologian than a social scientist, I was comfortable with those chapters that connect to my realities. Some chapters were more difficult to wrestle with, but this is a very helpful discussion. None of the contributors are persons that I had been aware of prior to reading the book, which was recommended to me as a way of understanding the world in which I seek to do ministry.

It simply is impossible to engage each of the essays, but I will point out several that I found of interest. One chapter, that by Robbie Goh of Singapore speaks of the influence of market theory on theology in the urban church. He engages the Protestant ethic that held up the idea that one should be both acquisitive and frugal. That guided the church for centuries, but today the market drives religion. Megachurches have become businesses, who have discovered how to do effective fund-raising, but also build media and business empires. He writes that many ministries no longer operate with a "strict repudiation of worldly mammon, but rather a slippery slope of negotiation and various combinations and admixtures" (pp. 54-55). Here sacred and secular are blurred, and this will continue to accelerate over time. The chapter that follows, written by Tovi Fenster, looks at the city of Jerusalem where religious and secular intersect in often complicates ways. All manner of visual and aural realities collide as the sounds of religion echo out into the community, where the religious often controls the ebb and flow of life, and yet many of the people living in the city are secular.

Faith communities have been actively involved in urban revitalization efforts, with the Church of England taking a major role in places like London. But the involvement of faith communities in this effort has not been without controversy, as the essay of Andrew Davey and Elaine Graham demonstrate. Sometimes faith groups simply have not been up to the task, but in other cases it is the nature of the group that causes controversy and division. In London the growing Muslim presence has led to questions about the place of the other, especially as they seek to build mosques. This has led to the emergence of the idea of "white racial victimhood," especially among the white working classes who feel that they're not getting the same opportunities as minorities (sound familiar?). Some of the anti-Muslim sentiment is couched in Christian nationalist sentiments, with these white racist groups hijacking the nation's Christian identity. The question then for the church is how to respond to the question - who is the church for? In answering this question is it willing to fight extremism? What this discussion does is remind us that urban space is often contested space. It can lead to creativity, but it can also divide and segregate. John Eade's essay takes up a similar conversation, raising the question of how religious groups can sacralize urban space, focusing his attention on the building of mosques in London, which has seen an influx of immigrants. In other essays there are also discussions of ways in which to perceive this growing diversity - comparing melting pot and salad bowl models.

For me as a Christian interested in ministry in urban areas (for me it would be in Detroit), Angus Paddison's essay "On Christianity is Truly Public" was of great interest. Here in this essay the question is raised - why should the church care about the city? Paddison explores various theological approaches to the question, especially those offered by postliberals and Radical Orthodox theologians such as Hauerwas and Milbank. In answer the author notes three primary reasons. Theology is interested in all things, it reflects God's engagement with the world, and cities are by nature the magnets for diversity. So the question is - how does the church contribute to social cohesion in this dizzying diversity? In answering the question, of course, we must face the dilemma of allowing the church's voice to be secularized and sublimated to the needs of the state.

Although this isn't a book designed for a quick read, it has significant resources that will benefit those who care about the world in which we live. Like any book that is composed of individually written essays, some are better written and some are of greater interest to one reader or another. You the reader must decide, which ones to focus in on, though it would be helpful to at least skim them all (I did this at certain points). Because I'm a Christian, I was interested in those essays that spoke specifically to how Christians engage the city, and found most of these essays very helpful. I'm also interested in discerning ways in which my faith can engage with other faith traditions in ways that are beneficial to the city, and found that the essays, like that of John Eade, were especially helpful. The context of these essays is not American, but for the most part, the implications fit the American situation as well as others (though the nature of the British commonwealth allows for greater migration than does the American context). As diverse as Los Angeles and New York might be, London is more so.

The book is a call for people of every faith tradition to consider how they should be engaged in urban life. In my estimation it succeeds in doing just that. To my friends interested in urban ministries - read this book. To those who believe that secularism is taking over, then read the book. If you're a Christian and your wondering whether the city is worth the effort, read the book. And Christians, who have lived as if they are the dominant public voice, the book demonstrates that we're not the only game in town. The book helps us understand the ways in which we can share this space.

I should note finally that I picked up the book at the recommendation of a Muslim friend who is a scholar of the place of Islam in modern European and American contexts. So, this isn't just a book by Christians for Christians. It's a book for anyone interested in questions relating to religion and urban life. The evidence is in - even as some religious institutions are struggling spirituality, religion, expressions of faith continue to be present, only they are present in increasing diverse ways. The secular pathway that was once hailed as the future seems to be fading quickly, but as a result the public square has become increasingly diverse and therefore contested space, and we must understand why this is true so that we can share it in beneficial ways.