Why the Silence? An Easter Sermon 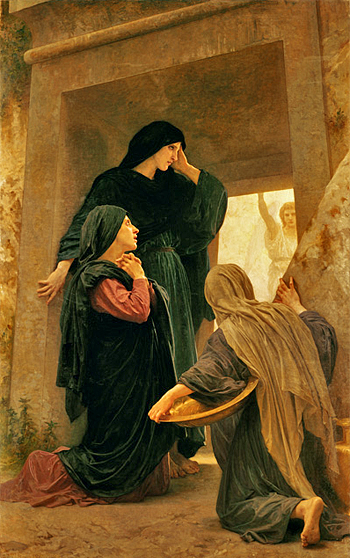 Easter has finally arrived in all its glory, and we’ve come here this morning to lift our voices to God in praise.  We come to celebrate the good news that the tomb is empty and that Jesus is risen from the dead.  Death has lost its sting.  Upon hearing this good news we get to sing “Christ the Lord is Risen Today” and “Crown him with Many Crowns.”  We’ve heard the trumpet sound and we’ve shouted in response: “Alleluia! Christ is Risen!”

This is indeed good news!  Or as Paul tells the Corinthians, this is a message of first importance to be passed on from one generation to the next (1 Cor. 15).

And so, in the words of an ancient hymn penned by St. John of Damascus:

Now let the heavens be joyful!

Let the earth its song begin!

The world resound in triumph, and all that is therein;

let all things seen and unseen, their notes of gladness blend;

for Christ the Lord has risen, our joy that has no end.
(Chalice Hymnal, 228).


The message is clear.  God has acted on our behalf, swallowing up death forever, so that we might have joy without end (Isa. 25:6-9).

Our guide this morning to the Easter story is the Gospel of Mark, which is brief, to the point, and ends abruptly.  Like a canceled TV show that ends in a cliff-hanger, we’re left wondering what happened next.  There has to be more to the story, and yet Mark doesn’t resolve the tension.

It’s true that there are other endings to Mark’s gospel, but they don’t appear to be original, though they do suggest that many early Christians found Mark’s ending to be less than satisfying.  We can fill in the gaps with the other gospel accounts, but perhaps Mark ends his resurrection story in this way for a reason.  Although it’s possible that there was once an original fuller ending that somehow got lost, but what if Mark wanted to end the story with the women fleeing the empty tomb in fear, saying nothing to anyone.  If that’s the way Mark intended to end his story, what does this say to you?  What is the message Mark wants us to hear?

If we’re going to answer this question about what Mark has in mind by ending the story as he does, we might want to go back to the beginning.  Mark opens his gospel with these words: “The Beginning of the good news about Jesus Christ, God’s son, happened just as it was written about in the prophecy of Isaiah.” (Mk 1:1-2a).  Mark begins with the promise of a messenger who will prepare the way for the Lord.  This first messenger who prepares for the Lord is John the Baptist, who baptizes Jesus, and helps launch his ministry.  But, at the end of the story, there’s a different messenger who prepares the way for the Lord.  The question is – are we ready to follow the directions given to  us by this second messenger who appears in the tomb of Jesus?

Mark 16 begins with three women heading toward the tomb where Jesus was placed after he died on Good Friday.  According to Mark’s account, the soldiers nailed him to the cross and joined the crowd in mocking him.  After hours of suffering, Jesus cried out to God “My God, My God, why have you forsaken me.”  Then, giving into the suffering, he died.

After he dies, Joseph of Arimathea, a wealthy and powerful man who was sympathetic to Jesus’ ministry went to Pilate and got permission to take the body and place it in his own tomb.  Had he not done this then it’s likely that the soldiers would have thrown Jesus’ body the dogs, which was the normal way of disposing with those who were crucified.  Joseph had to hurry because the Sabbath was about to begin.  There wasn’t time to fully prepare the body for burial, so that would have to wait until after the Sabbath.

According to Mark,  two women watched this take place, including Mary Magdalene, who now joined two other women in going to the tomb to finish the burial preparations.  After they had gathered up their spices early on Easter Morning, they the headed for the tomb.  As they neared the tomb, they remembered that a large stone sealed the entrance.  How were they going to open up the tomb?  In the end it didn’t matter.  They wouldn’t need a crew to roll the stone away, because the tomb was already open.

The sight of the open tomb startled them, but instead of running back home to where the rest of the disciples were hiding, they entered the tomb.  To their horror, they discovered that the body of Jesus was missing.

If these women were like any of us, they had to be wondering – who stole the body?  You know the feeling.  Something is missing.  You know exactly where you put it.  Mary Magdalene had seen the tomb and knew she was at the right place.  So somebody took the body.

As they frantically scanned the empty tomb, they saw this young man sitting there to their right.  Now they really were frightened.  Seeing their despair, the young man reaches out to them and tries to calm them down.  He says:  “Don’t be alarmed.”   Why is it that every time there’s a visitation like this, the first thing the messenger says is: Don’t be alarmed; or, Don’t be afraid?

I don’t know if he succeeded in calming them down, but he continued with his message.   You’re looking for Jesus of Nazareth, who was crucified and was laid here.  Obviously, as you can see, he’s not here.   This they already knew.  What they wanted to know was – where is the body.  Show us the body!  His answer is simple  –“He’s been raised.”

Now, what did this mean?  Yes, Jesus had been talking about dying and rising from the dead, but none of that had made sense to anyone.  Things like this just happen every day.  People die, they get buried – that’s the end of the story.  But on this day things were different.  Although the women, who had demonstrated great faithfulness in their discipleship, more so than any of the men – all of whom remained in hiding – couldn’t comprehend the gravity of their situation.

But the messenger isn’t finished.  He tells them that they must go tell Peter and the disciples that Jesus will meet them in Galilee. Go and share the good news that Jesus is risen!

After this commission is given, then the gospel closes with these words:   “Overcome with terror and dread, they fled from the tomb.  They said nothing to anyone, because they were afraid” (vs 8 CEB).

Why did they flee?  Why the silence?

How would you have reacted to such news?  What would you make of the emptiness of the tomb and the message given by the young man?

Like I said earlier, when you come to verse 8, you feel as if something is missing.  Surely the women said something to someone, but Mark simply ends the story with fearful silence.

In this earliest of all the gospels, there isn’t even one resurrection appearance.  There’s just an empty tomb and the promise of a reunion.  There are none of the appearances that Paul speaks of, nor does Jesus show off his wounds to a doubting Thomas.  There’s no breaking of bread at Emmaus, no great commission; there’s not even an ascension.  There’s just the promise that Jesus will meet them in Galilee.

The silence, with which the gospel ends, seems deafening.  We want to know more.  But perhaps we have enough to go on.  Our friend Bruce Epperly writes that: “We don’t need the exact details of resurrection to believe that Christ is alive, unbound, and ever-present.” (Process and Faith).

Could it be that the open-endedness of Mark’s gospel is an invitation to write our own story into Jesus’ resurrection story?  Could it be that Mark is inviting us to pick up where the women left off, even if we do so in fear and trembling?

When it comes to Easter, we can get bogged down in the details.  We can argue about the differences between the way the gospels each tell their own story of the resurrection.  Then there are the modern questions of science and history that face us.  These are important questions, but the message of the moment is that Christ is alive.  Christ is present with us as we face the future.  God is, as Bruce points out: “working in all things to bring forth God’s shalom and inspire us toward partnership in healing the world.”

So, where are we to meet Jesus?  This is the question of the day?  We have heard the calling to be a missional congregation.  We believe that Jesus is bringing life and peace and healing to the world through our participation in Head Start, Motown Mission, Gospel-in-Action Detroit, SOS, TIG, the Metropolitan Coalition of Congregations.  But it’s not just through these “sanctioned” activities, that we’re engaged in this partnership of healing.  Wherever we live out God’s love for the world, we are making known the presence of the living Christ – whether at work, in our neighborhoods, or our non-church volunteering.  As we live Christ-filled lives, the silence of the tomb is broken.  Therefore, let us boldly declare the good news that “Christ the Lord is risen Today!  Alleluia!”  Amen!

David said…
"There’s just the promise that Jesus will meet them in Galilee."

This is likely the truest account. It's much more satisfying for me to live as Jesus would have us. I don't want to be seduced into complacency, as if believing the "right story" will save me, or the world with no further effort on my part.
That's utter kid-stuff.

We don't even need to proclaim Christ has risen (at least not at work). We just need to be always mindful of the lessons taught, and insure that no one is ignored.

We are continually reminded (by a visitor) that we are a radical bunch, and that God will take notice of our "straying". We must be doing some things right.
9:28 PM

David said…
It just occurred to me. If I were in that place and time, I'd be afraid Jesus would suffer another attempt on his life. I'd be silent.
9:56 PM