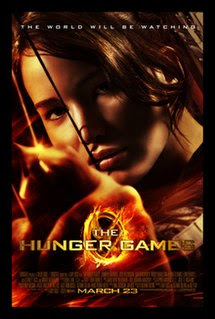 I went, somewhat reluctantly, last weekend to see The Hunger Games.  I hadn't read the books and didn't really know the story.  Like others my age, I probably didn't see the point of watching a movie aimed at a very different demographic.  But, I found the movie to be rather compelling.  I'm still working through it in my mind, and plan on reading the first book in the trilogy.  Today's edition of Sightings explores the possible messages of this series of books, noting that there is more to Young Adult Lit than escapism.  In Katniss's resistance to the way things are, we see hope that even with overwhelming odds, one can make a difference.  Emmanuelle Burton, a Ph.D. candidate at the University of Chicago Divinity School, helps make sense of it all.  I recommend seeing the movie, but you might want to read this first!  If you've seen the movie or read the books, share your thoughts.  What do you experience in this film/book?
******************************

References
“The Power of Young Adult Fiction,” New York Times, March 28, 2012
Adam Gopnik, “The Dragon’s Egg: High Fantasy for Young Adults,” The New Yorker, December 5, 2011.
Emanuelle Burton is a PhD candidate in Religion and Literature at the Divinity School and a 2011-2012 Junior Fellow in the Martin Marty Center.
----------
This month’s Religion & Culture Web Forum features “Three Lights on the Queen’s Face: On Mixing, Muddle, and Mêlée” by Larisa Jasarevic. Jasarevic writes about encounters at a singularly popular therapist in Bosnia, Nerka, whom patients have lovingly titled “the Queen of Health.” In the midst of the new medical and magical market, sorcery and Koranic healing appeal to people in Bosnia irrespective of their religious backgrounds, upsetting the conventional image of Bosnia as forever divided by ethno-national-religious considerations. According to Jasarevic, Nerka irreverently puts into play and displaces the differences reified since the 1990s genocidal conflict. Beginning with Jean-Luc Nancy’s reluctant writing on identity and mixing--provoked by the Bosnian war and discourse of ethnic cleansing--Jasarevic's essay visits some local, ritual, and habitual responses to magical, medical, and religious mixing and paints a gathering around the impossibility of belonging. Read Three Lights on the Queen’s Face: On Mixing, Muddle, and Mêlée.
----------
Sightings comes from the Martin Marty Center at the University of Chicago Divinity School.
Apocalyptic Politics Ethics Film Literature purpose Sightings The Hunger Games Violence Young Adults