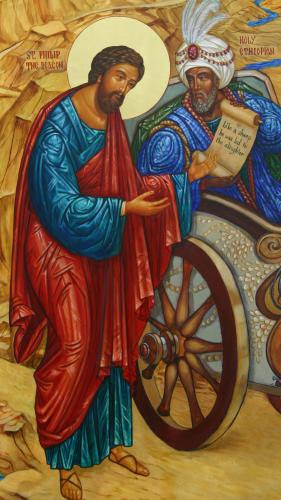 26 An angel from the Lord spoke to Philip, “ At noon, take the road that leads from Jerusalem to Gaza. ” (This is a desert road.) 27 So he did. Meanwhile, an Ethiopian man was on his way home from Jerusalem, where he had come to worship. He was a eunuch and an official responsible for the entire treasury of Candace. (Candace is the title given to the Ethiopian queen.) 28 He was reading the prophet Isaiah while sitting in his carriage. 29 The Spirit told Philip, “ Approach this carriage and stay with it. ”30 Running up to the carriage, Philip heard the man reading the prophet Isaiah. He asked, “ Do you really understand what you are reading? ”31 The man replied, “ Without someone to guide me, how could I? ” Then he invited Philip to climb up and sit with him. 32 This was the passage of scripture he was reading:
34 The eunuch asked Philip, “ Tell me, about whom does the prophet say this? Is he talking about himself or someone else? ” 35 Starting with that passage, Philip proclaimed the good news about Jesus to him. 36 As they went down the road, they came to some water.The eunuch said, “ Look! Water! What would keep me from being baptized? ” 38 He ordered that the carriage halt. Both Philip and the eunuch went down to the water, where Philip baptized him. 39 When they came up out of the water, the Lord’s Spirit suddenly took Philip away. The eunuch never saw him again but went on his way rejoicing. 40 Philip found himself in Azotus. He traveled through that area, preaching the good news in all the cities until he reached Caesarea.  (Acts 8:46-40 CEB)

The story of Philip's encounter with the Ethiopian Eunuch is a powerful reminder that God can and will overturn barriers that we erect or that even God might erect.  Here is a person who has a deep sense of loyalty to the God of Israel, and yet his physical condition limits his access to the things of God.  As we journey through Easter, and near the Pentecost moment when the Spirit turns things upside down, this story is a good reminder of where the pathway is leading.

I appreciate a word given by Barbara Brown Taylor found in today's reading found in the Daily Feast: Meditations from Feasting on the Word, Year B

This story is think with the presence of the Holy Spirit, which raises interesting questions about how that Spirit works.  If God is the Law-maker, then God is also the Law-bender, or at least the Law-transcender, who both places limits on the faithful and inspires them to challenge those limits when right relationships with God and neighbor are at state.  This dynamic shows up in both testaments, not just one.  When Philip follows the Spirit's leading to go to the Ethiopian eunuch, he follows in the footsteps of his ancestor Elijah, who was led by the Lord to a widow of Zarephath (1 kings. 17:9).  When Philip comes up with nothing that might prevent the Ethiopian from being baptized, he acts on the eschatalogical prophecy of of Isaiah 56:4-5.

As Barbara Brown Taylor notes, it's not that there aren't limits, but God can and will transcend them, when it is appropriate and fruitful for the furtherance of our relationships with God and neighbor.

As we begin a new week, what barriers is the Spirit removing?

John said…
Doesn't this reading hold a message for the LGBT community, or, more significantly, for those who see membership in the LGBT community as a barrier to full entrance into the community of believers? One may be a eunuch (non-procreative or in a non-procreative relationship) either by choice or by genetics, or by force or circumstance. Matt 19:12. In any of these events, does this passage not invite them into the fellowship of believers?
11:59 AM