Time for Faith in the Public Square 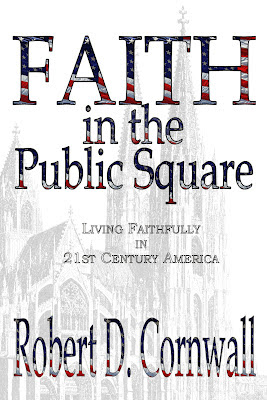 On Thursday evening the moderator of the Vice Presidential Debate asked Joe Biden and Paul Ryan, both Catholics (from different wings) how their faith influenced their politics.  It's a difficult question to answer, but an important one none-the-less.

Now, a major election is just weeks away, and people of faith must consider how their own faith professions will guide them as they vote.  What perspectives most line up with the teachings of their faith traditions?

I have taken up these kinds of questions in  my recently published book that carries the Title Faith in the Public Square (Energion, 2012).  The book is composed in large part of revised versions of op-ed pieces I wrote for the Lompoc Record between 2006 and 2008.  I take up many issues, ranging from gay marriage to immigration, from poverty to prison conditions, from religious freedom to interfaith cooperation. I believe that this book can be of great benefit to an electorate that must wrestle with important issues  that affect not only themselves, but their neighbors as well.
Now, you can take my word for this, or check out what some of the reviewers have to say.

So, consider what Deanna Ogle has to say of the book:

All in all, I would highly recommend Faith in the Public Square. This book had a refreshing and hard-hitting look at the role of religion in the life of a citizen. I appreciate Bob’s courage in approaching the topics he talked about, and I also appreciate the warm tone he wrote with.

If you want some good theological brain food, a fresh take on civilian life, and a conversation starter to build your religious and civic principles on, this is definitely the book for you.  (Deanna Ogle, review at Provoketive Magazine).

Or reviewer Joel Watts, who writes:

Robert Cornwall’s latest offering, Faith in the Public Square, is a much needed reminder that faith need not be absent from the public square. Or, for that matter, that faith in the public square need not be a controlling factor, recognizing that we are in a democracy, and democracy calls for compromise. Cornwall seems to follow Allan Bevere’s book, The Politics of Witness (Energion, 2011), in attempting to keep a faithful engagement alive and well in American politics, but not to the extent of what many conservatives and liberals have stretched it too.


My partner in interfaith work in the city where I minister, Padma Kuppa, offered her own take on the book, though she did chide me for neglecting Hinduism -- that will come!

The essays are Bob's call to action to people of all faiths to consider "what kind of world does my faith tradition envision?" He clearly points out "this is a pluralistic democracy, and that the players in the public square must respect the rights of the other."


Cornwall’s passions seem to be religion and politics, and he loves writing about where the two overlap (whether beneficially or not), but the topics aren’t limited to this. Toward the end of the collection he strays to other controversial issues such as stem cell research, the source of sexual preference, and “enhanced interrogation techniques” (torture). Cornwall’s writing is piercing, yet engrossing because it’s both intelligent and balanced. Of religious differences, he is respectful, sharing his own beliefs without elaboration or evangelism.

So, go out and pick up a copy before you dot another i!  Do so at any of these fine establishments:

Directly from the publisher -- Energion Publications.

(Both in paperback and for Kindle).

So, go out and buy a copy and then come back and offer your thoughts.  But most of all ask yourself -- what does it mean to live faithfully in a religiously diverse nation?  Does faith matter to your politics?

d'Rao's said…
Faith is not brought by any human. It is of the world by tradition, imposed on everyone by their parents or elders concern, at their very early age less than 3 years, democreticaly. After all, anyone can only behave either in public or private based on his/her Faith.
But every one of us brought, being a child, Happiness in to the world and enjoyed this Happiness till our 12.
If anyone of us did or secure not this lost or brought Happiness the journey of his/her is abrupt, will not reach HOME. Dayakar Rao S.
3:16 AM