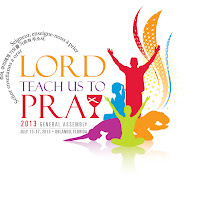 The theme for this year’s General Assembly emerged from this very passage of Scripture – “Lord, Teach Us to Pray.”  It was a good theme for us to take up as we entered once again into important but often difficult conversations.  It is always good to bathe our conversations in prayer.  After all, we come together as followers of Jesus who seek to be in relationship with the living God.  Sometimes we forget that this is true.  Our prayers become perfunctory rituals.  We offer a quick word to God, assuming God is paying attention, and then we get on with business, often forgetting that we’ve invited God into the conversation.

The Disciples come to Jesus and they ask him to provide them with a distinctive way of praying – just like John did for his disciples.  And Jesus complies.  The result is a prayer that in one form or another we’ve been offering up to God for two millennia.

Luke’s version is a briefer than the one in Matthew, which is closer to what we pray today.  But the basics are there, even if the words change here or there.  What do you see in this prayer?  If we’re to look to it as a model for our own prayers, what’s the take away?

Do you find that this prayer, as a model for our own prayers, both public and private, is both simple and honest?  As Wilma Bailey of Christian Theological Seminary puts it: “In this text Jesus wants the disciples to understand that simple prayers are as efficacious as long complex ones” [Preaching God's Transforming Justice: A Lectionary Commentary, Year C, p. 333].

I think this is a good observation.  I know that many Christians, including some of you, are afraid to pray in public because they don’t feel like they measure up.  Maybe you’re feeling intimidated by prayers that seem eloquent and pious.  The good news, as I hear it in this passage, is that all God wants to hear is the confession of our hearts.  Simplicity and honesty, not eloquence or the pretense of piety, is what matters.

Yes, it’s okay if your prayers are simple and even halting.  Paul writes to the Romans and tells them that “the Spirit helps us in our weakness; for we do not know how to pray as we ought, but that very Spirit intercedes with sighs too deep for words” (Rom. 8:26 NRSV).  The Spirit of God knows our hearts and interprets them to God.  That is indeed good news!

Not only does Jesus invite us to offer up prayers that speak from the heart, but he also invites us to be persistent in our prayers.

As I read this passage, the character of Sheldon Cooper, from The Big Bang Theory, came to mind.  If you’ve seen this sitcom, you know that Sheldon has a rather distinctive way of knocking on doors.  Let’s say he wants to talk with Penny, who lives across the hall from the apartment he shares with his colleague and friend Leonard Hofstadter.  When Sheldon knocks on the door he’ll knock, say “Penny,” and then repeat this until Penny comes to the door.  It doesn’t matter if it’s mid afternoon, or the middle of the night, when Sheldon wants to talk he knocks on the door until it’s opened.  And you’d better respond, because he won’t go away until you do!  They call this persistence!

That’s the kind of persistence I perceive in the first parable.  Like Penny or Leonard, Howard or Raj, this neighbor gets up and provides the requested loaves of bread, not out of love of neighbor, but so he can go back to bed.  So, if this is true of your neighbor, who gives in to your knocking, because of your persistence, what will God do when we come in prayer?

Jesus’ word to us is simple – ask, seek, knock!  Ask and you’ll receive.  Seek and you’ll find.  Knock, and the door will open.  These words appear as present tense verbs, which speaks of an ongoing action.  So, it’s asking, seeking, and knocking.  Persistence, it seems, leads to action.

Now, there’s a problem with this passage that needs to be acknowledged.  As you know, not all prayers are answered in ways we might like or desire.  I’ve spent time in groups that teach that if you have enough faith, then God is obligated to do what you ask.  Experience has shown me that it doesn’t work that way.  So, maybe we need to look at this asking, seeking, knocking in a different way.

Paul writes these words that help expand on what Jesus is saying here:

What does it mean to pray continually?  Is Paul suggesting that we should continually mouth prayers to God?  Or, is Paul thinking about our attitudes and demeanor.  Does the way we speak and act represent an attitude of recognition that God is present in every moment of every day?  That’s a rather scary idea, don’t you think?

When we gathered in Orlando, we had some difficult conversations to take up.  They were difficult because for some they were being asked to take on a vision they weren’t entirely comfortable with.  They were also difficult because some in the room were impatient, ready to move on, get busy, end the discussion.  That’s why when the time came to have this difficult discussion and vote about sexual orientation and the church, Sharon Watkins came out and prayed for us. And the question is – did the way in which we conducted ourselves give evidence that we are or were a people of prayer, a people committed to being in relationship with the living God.  Was it a perfunctory act, or was it one of faith?

The second parable raises the question of whether a father would give his child a snake if the child asked for a fish?  Or, would a father give his child a scorpion instead of an egg?   Yes, we know the horror stories – there are parents who would give their children snakes instead of fish and scorpions instead of eggs, but I don’t think we’d call them model parents!  No, when Jesus talks here about the parent-child relationship, he’s assuming that a parent will be concerned about the welfare of their child.  Yes, if we who are “evil” – how do you like that description? – know how to give good gifts, then surely God is faithful to do the right thing!

Getting back to prayer, the point of the conversation isn’t getting things, but rather pursuing a relationship with God.  Even if we can’t see God – or at most see God’s backside, as Moses did in the Wilderness of Sinai, God allowed Moses to see his goodness, but not his glory (Ex. 33:17ff) – there are ways of discerning God’s presence and voice.

And so we come to Jesus, and we ask him – “Lord, teach us to pray.”  That is – help us be both simple and persistent in our conversations with God.  May this be true when we talk publicly or privately.

And the Lord says to us – Ask, seek, knock.  Because if you do this, you will find me.

Arnold Lakes said…
I only have sighs too deep for words” (Rom. 8:26 NRSV). The Spirit of God knows our hearts and interprets them to God. That is indeed good news!
8:37 AM