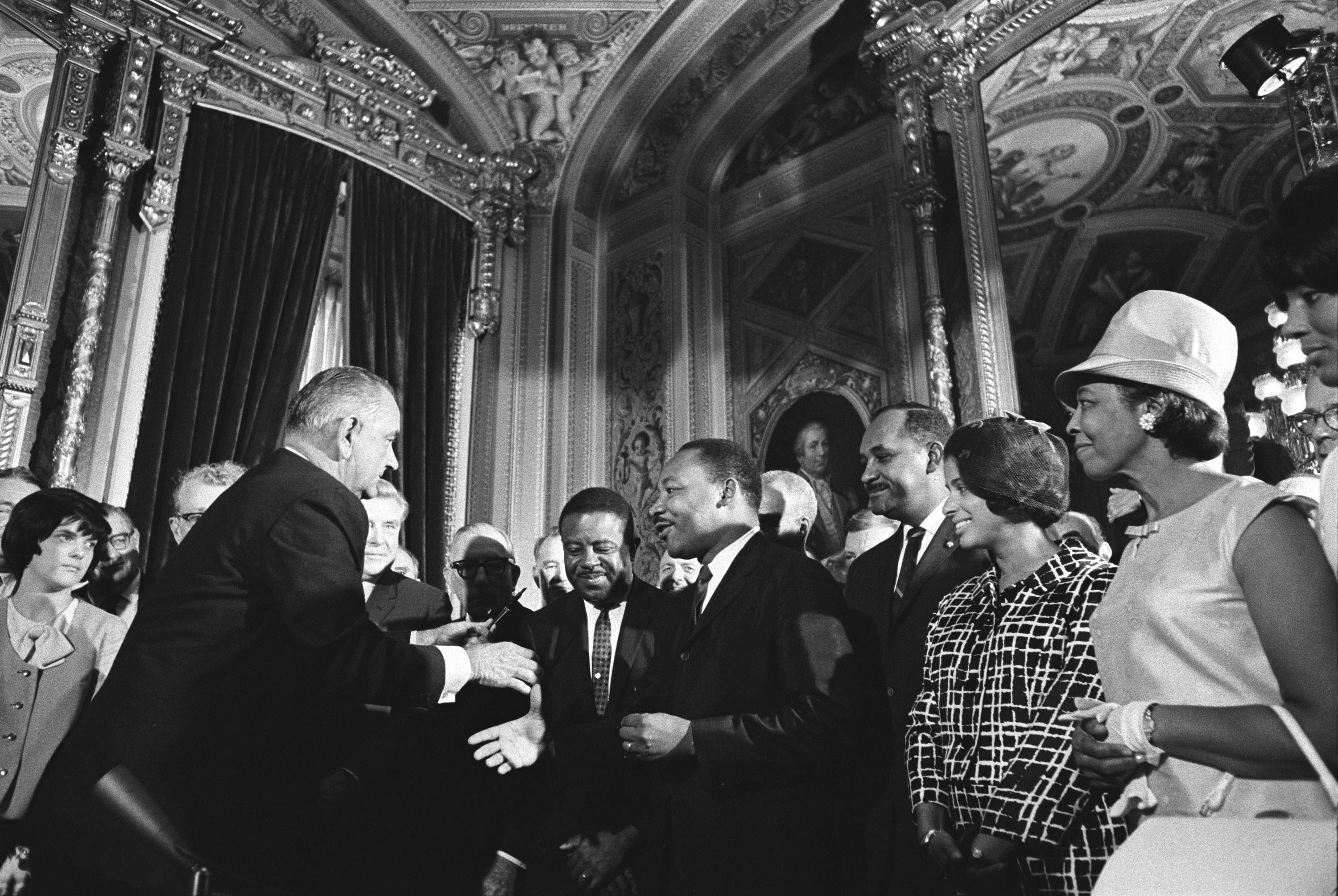 The Declaration of Independence makes this promise: “We hold these truths to be self-evident, that all men are created equal, that they are endowed by their Creator with certain unalienable Rights, that among these are Life, Liberty and the pursuit of Happiness.”  It took several generations and much struggle for this promise to be fulfilled.  Voting Rights were guaranteed to all males by the Fourteenth Amendment (1868).  The Nineteenth Amendment (1920) later granted that same right to women.  Although universal suffrage was guaranteed by these two amendments, for persons of color the promise wasn’t truly delivered until the passage of the Voting Rights Act in 1965.

On this the day after the United States, the land of my birth, celebrated its Independence, I think back a little more than week to the release of one of the Supreme Court’s most anticipated rulings.  It was a busy week for the Court, which nullified Section 4B of the Voting Rights Act.  Although this Act of Congress had been renewed in 2006 by a sizable bipartisan majority of the Senate, the Court’s majority decided to remove the mechanism that allows the Justice Department to intervene in cases where voter rights are being suppressed.  The Court left in place Section 5, which requires some jurisdictions to get pre-clearance from the Justice Department before making changes to their voting laws.  Unfortunately now the Justice Department no longer has the formula that would allow it to fulfill its duty as outlined in Section 5.

In its ruling the Majority opined that things have changed since the 1960s and 1970s, making the formula upon which the Act depends outdated.  They sided with the plaintiffs from Alabama, which was one of the worst offenders in earlier decades.  These plaintiffs claimed that they were being unfairly targeted, because of past deeds.  The majority agreed with them and set aside the formula. It is likely true that the South has made great strides, but as a nation have we truly reached the place where no citizen fears losing their opportunity to vote?

While it is true that much of the overt legally sanctioned racism of that earlier era has dissipated, are we so far removed from the era of segregation that we can let go of an act of Congress that has proven so valuable in bringing justice to the country?  Recent attempts to suppress voting rights across the country suggests that maybe we’re still not far enough along to abandon this important tool of justice.

Looking back at that original act, as a pastor serving within the Christian Church (Disciples of Christ), I wish to note that the President who signed the Voting Rights Act into law was a member of the Christian Church (Disciples of Christ).  Lyndon Johnson knew something about racism, discrimination, and segregation, because he saw it occurring all around him growing up in Texas during the age of Jim Crow.  He was moved by what he saw to end these legal barriers to realizing the promise of the Declaration of Independence and the Constitution.  In a 1963 speech at Gettysburg, then Vice President Johnson answered Martin Luther King’s Letter from the Birmingham Jail with these words:

The Negro today asks justice.  We do not answer him – we do not answer those who lie beneath this soil – when we reply to the Negro by asking “Patience.”  It is empty to plead that the solution to the dilemmas for the present rests on the hands of the clock.

Time has marched on, actions have been taken that provide the government with the tools to answer Dr. King’s request.  Although the Voting Rights Act was directed principally at Southern States where segregation had been most keenly felt by African American citizens, its promises of access to the voter’s booth extends to all citizens, no matter their color, promising them the opportunity to participate in their own governance.  We dare not allow this promise to be revoked or even diminished in a mistaken belief that discrimination and prejudice are no longer present in our nation.

It should be noted that within hours of this decision the states of North Carolina and Texas moved to enact exclusionary statutes that had been overturned by the Justice Department, including instituting draconian voter ID laws and in the case of North Carolina ending programs such as early voting and Sunday voting that have been especially helpful for minority communities.  It is actions like these that hindered access, but instituting policies that were especially onerous for the elderly, the poor, and persons of color to cast their votes.

I can’t speak for the Christian Church (Disciples of Christ) as a whole, but I do believe that as community of faith we Disciples do affirm the principle that justice should be available to all Americans.  As the prophet Micah reminds us:  God has told us what is god and what God requires of us:  “to do justice, and to love kindness, and to walk humbly with your God.”  And Jesus calls us to love our neighbor as we love ourselves.  Therefore, we would ask Congress to act with all due speed to fix the formula, based on more recent information, so that the Voting Rights Act can once again be fully implemented.  It may well be true that there are other jurisdictions beyond those noted in the current Act that need to be brought under the guidance of the Justice Department.  Although we are disappointed with the ruling of the Court, we believe that this ruling gives us the opportunity to revisit this important Congressional Act and bring it into compliance with the Court’s ruling.  May they create a formula that would allow all Americans to truly experience the freedoms promised by the Declaration of Independence and then enshrined in the Constitution.

If we are to request God’s blessing upon this democracy, then we must hold it to the highest standards of justice.  Because the United States is a democracy, we must make every effort to broaden access the polls not limit them.  We've come too far to go backward.  It is important to our future that everyone, no matter the color of their skin, their economic status, or their gender, can participate fully in this democracy.
Christian Church (Disciples of Christ) Congress Declaration of Independence justice Lyndon Johnson Martin Luther King Jr. Supreme Court Voting Rights Act

HiHopes said…
Wholeheartedly agree and may I add... watching the news with VRA ruling being announced followed by Paula Deen declaring that she is not a racist...odd at best!
5:48 PM

hotroderguy said…
Technically America is actually a federal constitutional republic. That's a form off democracy, but it is different than a true democracy. Not really the point of the article, but it does explain why something like this might have happened.
6:49 AM

Robert Cornwall said…
It is true that we are a representative democracy (republic), but that makes it even more important that all Americans have the opportunity to decide who their representatives are. This was, I believe reason given for launching the American Revolution -- taxation without representation. And it's not just access to the polls, it is gerrymandering that keeps many people from truly seeing their votes represented in legislatures and Congress.
9:14 AM