Embracing the New Creation: A Sermon for Pentecost 7C 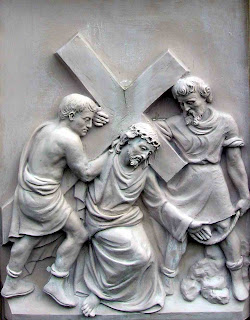 How can we embrace God’s New Creation?  Or, what does it mean to live in God’s Realm?  And how do we know we’re living in this realm?  What marks or brands us, so that we know we’re part of this realm of God?

Is it circumcision?  Apparently some Christians in Galatia thought so, but Paul disagreed.  We’re not really sure who was making this argument, but Paul didn’t think circumcision was a necessary marker.  He does write about baptism being the  means by which Christians clothe themselves with Christ.  Ultimately, it appears that what matters most, the thing we can boast
about, should we need to boast, is the Cross of Christ.  It is the cross that marks the entrance to the New Creation. That is, instead of a physical mark on our bodies, what matters most is our living a life defined by the cross.

As we hear this final chapter of Paul’s Galatian letter read, did you hear him take up a number of themes.  Like some of his other letters, the final chapter serves a catchall.  Paul lifts up a number of issues that need attention.  As a preacher I’m tempted to address them all, but my training tells me not to cover too many issues in one sermon.  So, I’ll try to behave!

In dealing with each of these issues, Paul reminds us that as children of God, we’re not to deal with them according to human standards.  Instead, he calls on us to look at things from the perspective of the New Creation.  Having prayed that God’s kingdom would come on earth as in heaven, we’re to look at life from a kingdom perspective.  Instead of majority rule, it’s the wisdom of God revealed in the cross that guides us.

One of the themes present in this chapter has to do with how we should live as members of a community of faith.  According to Paul if we live according to human standards, our lives are defined by the desire to “look good.”  That is – selfishness and the need to be at the center of attention.

As Paul speaks to the question of what it means to embrace this New Creation, he tells the Galatians to carry each other’s burdens, while at the same time carrying their own load.  Having to choose a focus, I’m going to take a look at this pairing.

So, how do we bear each other’s burdens while being told to carry our own?  If we treat this question from a human point of view, which means looking at it through the lens of partisan politics, don’t we have to choose one or the other?   Either we’re on our own or society owes us the good life.

Paul isn’t given to either/or positions.  He’s open to both/and.  According to Paul we’re all in this together, and each of us has a role to play.  In his first letter to the Corinthians, Paul uses the analogy of the body to describe the church.  The church is Christ’s body, and God has arranged each member of the body as God chooses.  And according to Paul, every member of the body has its place and is important to the health of the body (1 Cor. 12:14-26).

Paul doesn’t appeal to this analogy in Galatians, but he does insist that having been clothed with Christ in baptism, we are made one in Christ (Gal. 3:27-28).  Here in Galatians 6, Paul says something similar to what we find in 1 Corinthians 12 – we have responsibility for each other, but we also have responsibility for ourselves.  In this case, Paul seems to be concerned that some members of the community aren’t taking responsibility for their own lives.  In fact, you get the sense from reading this passage, that some members of the community were busybodies, who wanted to make sure everyone else was doing their share, while falling short themselves.  They liked being supervisors, not workers!

Paul’s word to this group of people is very direct – don’t think too highly of yourselves.  Instead, test your work, be happy with it, and carry your load.  Why?  Well, as Paul puts it – we reap what we sow.

When each of us takes responsibility for the community and for our own self, then we will carry each other’s burdens.

Although our American system isn’t the same thing as God’s realm, there is something of an analogy between what Paul is talking about here and our political system.  Over time Americans have tried to balance individual freedom with the recognition that we must take care of one another, especially the most vulnerable among us.  Our system is not perfect, and there are those who try to push us to the extremes at either end, but at our best we seek to find a balance between responsibility for the other and responsibility for one’s own self in a way that doesn’t let selfishness define our relationships as a community.

Marriage is another institution that illustrates this idea of balance.

Even as I’m aware of our nation’s blessings on this 4th of July Weekend, our upcoming celebration of thirty years of marriage on Tuesday is a good reminder of what one can learn from marriage about balancing personal responsibility with responsibility for the other.

When Cheryl and I were dating, I had just become enlightened about the principle of mutual submission in marriage.  According to this understanding, marriage is the partnership of equals who give not just 50% of themselves to the relationship, but 100%.  Yes, having gone off to seminary, I had become enlightened!

Now, I must admit that I don’t always live up this enlightened vision of marriage, which Cheryl is happy to remind me of.

What excited me about this discovery was that it seemed so different from what I’d observed growing up.  Back then, the man was supposed to be the head of the house, which was his castle.  The wife and children were supposed to obey and serve.  I didn’t want that kind of relationship.  I wanted to live in a partnership of equals, who shared life’s burdens fully.

Besides, I know that if I’m hungry at lunch time, I can’t just sit down at the table and expect food to magically appear.  In order to take care of my hunger, I’ll have to fix my own lunch!  That is, I have to carry my own burden.  At the same time, Cheryl and I have formed a team.  We’re partners, who carry each other’s burdens, which, I think is the point of Genesis 2.

You don’t have to be married to understand that it’s not good for a human being to be alone.  There are other ways in which we fill this need for companionship, but I do believe that the marriage relationship is rooted in this reality.  We need each other, even as we take responsibility for ourselves.

The greatest threat to this balance that defines the New Creation is selfishness.  Paul tells the Galatians not to think too highly of themselves.  Don’t be  concerned about whether the other person is doing their fair share.  Just make sure you’re doing your best job and be happy with that.  Now, I didn’t say that this is easy – it’s just that this is the way of the kingdom – no matter what kind of community you’re a member of – from family to church.

Although we have freedom in Christ that freedom is tempered by our  responsibility to each other.  In Galatians 5, Paul warns the Galatian church not to use their “freedom as an opportunity for self-indulgence, but through love become slaves to one another.”  In doing this we fulfill the law to love our neighbors as we love ourselves, and this is the key to finding the right balance  (Gal. 5:14-15 NRSV).

As we hear this call to embrace the New Creation, we also hear this closing word from Paul:

May the grace of our Lord Jesus Christ be with your spirit, brothers and sisters. Amen.  (Vs. 18 NRSV).

Yes, it is God’s grace that enables us to embrace the ways of the New Creation.