God’s Foolish Adventures and the Joy of Heaven 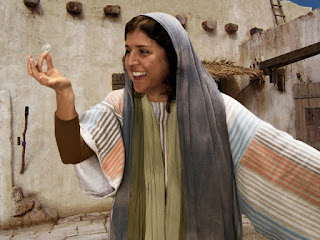 You can tell a lot about a person by the company they keep, or so I was taught growing up.  If you hang around the wrong kind of people, you will likely follow their lead.  There’s even biblical warrant for separating oneself from those who deviate from norms of behavior – and no it’s not just in the Hebrew Bible!  Paul demands that the Corinthian Christians come out from among the sinners – for “what do wickedness and righteousness have in common?” (2 Cor. 6:14-17).  So, it’s no wonder people criticized Jesus for hanging around with “sinners.”  It just doesn’t look good.

It may not look right to hang out with sinners, but Jesus has good reason for doing so.  He is engaged in the mission of God.  This is his calling – to search for the lost and reclaim them.  To bring home his point Jesus shares a few stories that are collected here in Luke 15.  The most famous of these stories, the parable of the Prodigal Son is left for another day.  The lectionary instead asks us to consider these two briefer but still revelatory parables – the parable of the lost sheep and the parable of the lost coin.
Each of these parables has its own nuance; its own point to make.  The first parable, the one about the lost sheep has a truly missional edge to it.  You have ninety-nine sheep in the fold.  Each is safe and sound.  Then there’s that one other sheep, the one that’s wandered off.  It’s too bad.  One hundred makes for a rounder number, but losing one while keeping safe the other ninety-nine isn’t a bad day’s work.  But that’s not Jesus take on things.  He asks us to consider which shepherd wouldn’t leave behind the ninety-nine to pursue the one lost sheep.  Think about it for a moment.  It’s clear that Jesus never was a shepherd.  Who in their right mind leaves behind the ninety-nine to fend for themselves so you can go after the one that foolishly wandered away?  If you don’t stay home and tend to the flock, something bad could happen.  You could lose the entire flock – in the foolish pursuit of the one that is lost.  Isn’t this the way most congregations think.  Take care of those on the inside; don’t worry about those on the outside.  But in Jesus’ mind, his calling is to go out and find the lost and restore them to fellowship with God.  And by doing this there will be joy in heaven.  This parable really doesn’t make any sense – unless we look at this from God’s perspective.  That is, God is inclined to take risks to restore us to right relationship.

If the first parable doesn’t leave you scratching your head, the second one surely will.  A woman loses one of her ten silver coins, and she searches high and low for it.  And finally she finds it.  When she finds it she decides to have a party to celebrate.  She invites all her friends.  They have a great time.  But why?  Why throw the party?  Why such joy at finding a lost coin.  After all, the party itself would have cost far more than the value of that coin.  This is simply a foolish venture.  And yet Jesus holds it up as an example to us.

It is a reminder that to Jesus – and to God for that matter – what seems foolish to many is the wisdom of God.  And in God’s wisdom, it is appropriate to leave behind the ninety-nine sheep and throw a party that costs more than the value of the coin that is lost, because God is concerned about the welfare of the one that is lost.  God will go to extremes to restore the sinner to fellowship.

This isn’t business as usual.  It is, however, the divine way.    It is the mission of God.  So for the church today, we must ask the question – are we ready to head out on what looks like a foolish adventure called the mission of God?
Email Post
Labels: Gospel of Luke Jesus Joy Lectionary Lost Coin Lost Sheep Parables Pentecost Season Reflections Restoration Salvation Sinners