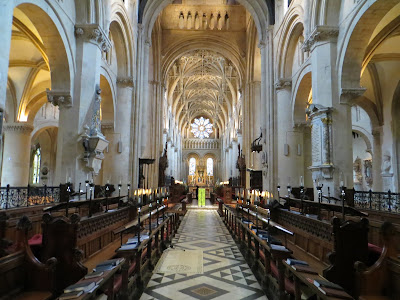 It is Sunday, and I chose to worship at Christ Church Cathedral in Oxford.  I had many choices, including St. Aldate's across the street, which offered exuberant charismatic/evangelical Anglican worship.  I could hear the band out on the street.  Or, I could have gone to St. Mary Magdalene, which offers high church worship.  I stopped in this afternoon and could smell the incense from an earlier service.  St Mary Magdalene carries on the tradition of the Oxford Movement.  Or, I could have checked out St. Mary the Virgin, a church once served by John Henry Newman, but today is a bastion of liberal Anglicanism.  But, I chose the cathedral.  It is liberal/ broad church, and yet retains the traditions of the church.  (I could have gone to the Methodists or some other tradition, but I came to touch base with my inner Anglican).
Christ Church is small by cathedral standards. It also serves as the chapel for Christ Church College.  The church is served by an educated staff, many with Ph.Ds. (canons are also faculty members).  This is a historic church, that has connections to Cardinal Thomas Wolsey, who founded the college.  It is the place where John Locke is buried.  It is also the place where John and Charles Wesley were ordained to the priesthood of the Church of England.
I must confess that the service -- a choral Eucharist drew out my inner Anglican, in spite  of a young boy who sought to compete with the preacher, who happened to be a Canon and Professor of  Divinity at the University.  The service was complete with organ, boys and men's choir,  who sang throughout the service.  If you've never heard  a choir like this, the sound is amazing.  The young boys, about 8-10 provide the soprano voices.  The blend was remarkable.  I must say that they moved me spiritually.  The sanctuary is laid out as a college chapel would be.  The nave is long and narrow, with seating facing across the aisle.  In the middle there is a larger space with chairs.  I sat behind the lectern and closer to the altar.
The opening hymn -- Come Thou Fount of Every Blessing -- with organ, choir and the reverberations of the cathedral layout -- was extremely powerful.  It's amazing when you're singing in a choir setting.  Each of the hymns was of similar nature.
The sermon provided by the Regius Professor of Divinity (Graham Ward) at the University was focused on human identity -- and was highly intellectual -- which made the young boy's rather loud conversation with himself  an interesting contrast.
From sermon we went to the heart of the service -- the Eucharist.  As a Disciple our communion service (every Sunday) is rather simple -- a call to communion and words of institution, followed by a prayer for the elements -- and then distribution to the congregants who remain seated and take from little plastic cups.  It's workable, but I must admit that when done well, I find the Anglican Eucharist much more fulfilling.  I prefer to take the communion at the altar and prefer wine over grape juice.  And the Eucharist was done well -- with the priest intoning the opening prayer of preparation, followed by the choir singing the Sanctus (in Latin).  As the prayer is continued with the prayer of consecration -- we move toward the breaking of the bread and the reception of the elements at the altar.
The Celebrant, after we share the Lord's Prayer says:

We break this bread to share in the body of Christ.

Though we are many, we are one body, because we all share in one bread.

In invitation to communion, the Celebrant states:
Jesus is the Lamb of God
who takes away the sin of the world.
Blessed are those, who are called to this supper.
And we replied:
Lord, I am not worthy to receive you,
but only say the word, and I shall be healed. 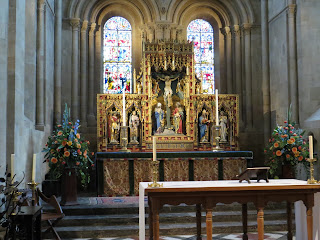 As the choir sang the Agnus Dei, we were dismissed to the altar.  Taking the bread and cup proved to be spiritually invigorating.  After I returned to my seat I listened as first the choir sang and then the organ provided support.  When finished, the Celebrant offers the prayer after communion, we sing a hymn, and the blessing and dismissal is offered.  Some leave, but I stay through the postlude. 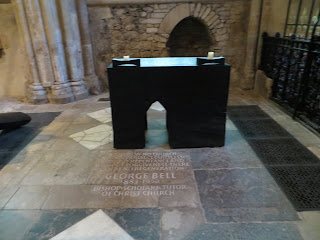 Once the congregation has left, I explored the cathedral, taking pictures of the inside of this really beautiful cathedral.  I even found Locke's memorial in the floor and the marker commemorating the ordination of the Wesley brothers.  I found an altar dedicated to Bishop George Bell, who was a close collaborator with Dietrich Bonhoeffer.
Yes, things finally came together -- I was drawn up into worship in ways that rarely occur for me -- though I must admit I can worship and lead worship at the same time.  But one of the things that the service reminds me of is that, at least for me, true spirituality needs embodiment -- and in the fabric and sounds of the service, I found that embodiment.
Email Post
Labels: Anglican Communion Choirs Embodiment Music Organs and worship Oxford pilgrimage Reflection Sabbatical Spirituality Worship