A Day in the English Countryside!

I have been in England for five days.  It is a journey I’ve been dreaming about for years.  I finally made it.  I’ve come as scholar doing research at the Bodleian Library, a tourist seeing sites, and as one on pilgrimage.  It is this third aspect that is the most difficult to pin down.  I think it will be on reflection that I fully recognize where I have met God along the way.  I think it is less in the sites, though they are impressive, and more in the context of friendships nurtured and made.


Today I laid aside the scholar hat and took up the role of tourist and pilgrim.  As a tourist I took the train from Oxford to Salisbury, though I must confess to getting on the wrong train and had to add in an extra stop at Reading.  But I made it – just 20 minutes late – thanks to a friendly young man who helped me figure out how to get from Reading to Basingstoke (where I was to connect to the Salisbury train).  All in all I ended up where I was supposed to go!


When I arrived at the station my friend and host at Oxford Brookes University, Bill Gibson, met me at the station.  He was much relieved when I appeared, after not making it off the expected train.  I’m going sans phone these two weeks, so had no way to let him know of my delay! 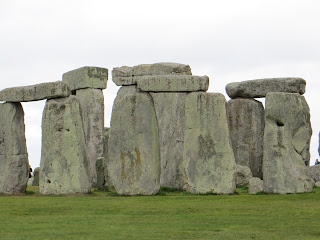 From the station we took off across the Salisbury Plain to Stonehenge.  This is a World Heritage Site and thousands of years old.  It is an impressive sight, and yet the site is strangely smaller than I expected.  It didn’t take long to make the circle, and off we went again (we had a lot of ground to cover). 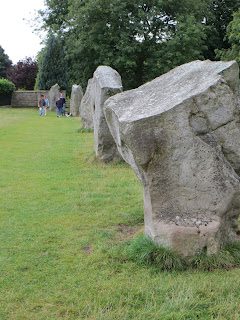 Next stop was Avebury, a site perhaps as old as Stonehenge and actually larger in scope.  It is a stone circle that surrounds the village – though the Saxon era church lies outside the circle.  Needing a place for lunch, Bill pulled up at the Red Lion, the only pub lying within a stone circle!  Before taking a look at the monoliths that surround the town, we had a nice English lunch.  It was wonderful food -- Pork sausages and cheddar mash potatoes, with red onion gravy – doesn’t that sound delicious?  It was.  Oh, and I had a pint of the local cider – yes it has alcoholic content!  I’m not a beer drinker so I’ll content myself with that.  Then, we had to have pudding.  I learned that pudding here stands for dessert.  My pudding was warm apple pie with ice cream.  It was a great lunch – and the conversation even better!!  Yes, Bill and I talked history!  After lunch we walked the circle, checked out the little Saxon-era church.  Not as old as the stone circle, but still old!! 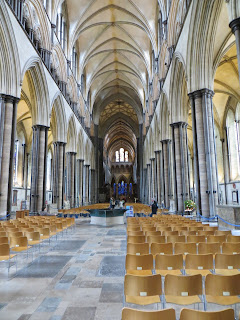 It started to sprinkle so off we went to Salisbury – we checked out two churches both of which have connections to Gilbert Burnet, an Anglican Bishop of Salisbury whom I have devoted study.  The Cathedral is simply magnificent.  A tall spire sits atop the 13th century building.  Inside you can fit multiple churches – and it’s set up to allow that.  It’s simply massive.  And awe inspiring.  A visit to the Chapter House allowed us to view one of the four remaining original copies of the Magna Charta – one of the most important calls for freedom (even if it really applied to the barons).  You see there is much to take in.  After taking in all of this -- and after we got a battery for my watch that stopped in the night -- we sat down for English Tea.  This includes a pot of tea and milk.  I learned that a gentleman puts the milk in first, because pouring hot tea into bone china cracks the china (not a problem in this case, but I want to be a proper gentleman).  But that’s not all – we also had scones, which we cut apart and put on it butter, jam, and the clotted cream (that’s the thickest cream off the top).  Oh, it was all good (maybe not good for the waistline, but good).


Finally, before I got on the train heading back to Oxford we made one last stop.  Old Sarum.  This site dates back 5000 years.  It is a raised area sitting high above the city of Salisbury, and was site of a castle, that dates back to Roman times and earlier.  Henry II imprisoned Eleanor of Aquitaine there.  There is the foot print of the Norman 11th century cathedral that later moved down the hill to the present site.  It’s an amazing place.  The castle was closed, but we got a good sense of things.


Then, off to the train (oh, and to finish off the day, I got a package of pork pies, which you eat cold – quite good).


It was a day spent seeing the English countryside.  Three churches (four counting the Old Sarum footprint), plus two important pre-Christian sites.  Where was good present?  In all places, in reality.  But I will have to take time to contemplate the fullness of this!
Email Post
Labels: England Friendship pilgrimage Sabbatical Sacred sites

rialham said…
I want to get to this location before I pass. Thanks for the pictures.
7:42 PM

rialham said…
This location is on my bucket list.
7:43 PM