Transcendent Moments -- Reflections after a Day in London 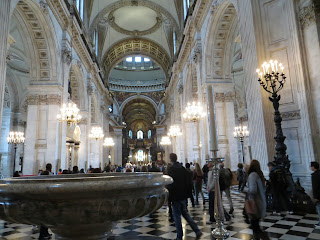 On Sunday I traveled to London from Oxford by train.  It was my one stop in London -- and I only had time to get a glimpse of the city.  I began the day in worship at St. Paul's Cathedral, the 17th century  edifice designed by Christopher Wren to replace the earlier Gothic Cathedral that had gone down in the Great London Fire of 1666.  Worship at the Cathedral is what one would call Broad Church -- or Middle of the Road Anglicanism.  No Incense, but still vestiges of ritual.  Choir and organ dominate.  The sanctuary was full -- maybe a 1000 in attendance.  Some visitors like me, others regular attenders.  The sermon on the Gospel delivered by Simon Jones, Chaplain at Merton College, Oxford.  Our ability to hear with understanding was hindered by the echo of the dome.  Interestingly enough the Dean of St. Paul's as he led the Eucharistic Liturgy could be heard without problem or without echo -- perhaps because of his location closer to the center of the dome.  While I must say I prefer the intimacy of the much smaller Christ Church Cathedral in Oxford, St. Paul's grandeur (and it is beautiful) does lift you into a transcendent state.

Near the end of the day, before I found my way back to Paddington Station, I took in an organ recital at the much more ancient Westminster Abbey.  Westminster is not a cathedral -- it is a royal peculiar (meaning it belongs to the monarch and not to the church).  It too lifts one to transcendent heights.  We sat (maybe 800-1000 of us) in the Nave, behind the Nave Screen that separated us from the choir and the high altar.  The organ filled the room with its lofty sounds.  It wasn't worship per se, but music does seem to lift the soul Godward.

I know that we live in an era where the material dimensions of spirituality are somewhat diminished.  Worship in a school auditorium is fine.  No need for crosses either.  Church is the people and not the building.  Now I affirm that the church is the body of Christ and not a building, but I wonder if in our attempt to free our spirituality from religion we are in danger of losing something important.  As I worship in St. Paul's, I'm mindful that for almost four hundred years people have gathered in that spot to worship God, to share in the Eucharist, hear the Word of God read and proclaimed.  Again, we come to roots.  Where do we find them and how do they find us.

In our world of self-developed, self-created spirituality do we not become sovereign rather than God?  God ceases to be monarch and becomes merely a President whom we elect.  In my Anglican worship experiences we have recited the creed, something we would not do in my own Disciples circles.  We take pride in not being a creedal people, but even if the creeds represent formulations of theology that reflect fourth and fifth century ideas, maybe we would be well advised to recite them on occasion, to be reminded that others have heard and reflected and considered what it means to be faithful to God.  Yes, God is transcendent (and immanent at the same time -- but that's for a different discussion).

rialham said…
Just wondered, if in the grandeur of the location, was Paddington bear there?
5:07 PM

Robert Cornwall said…
No sightings of Paddington Bear!
8:56 AM