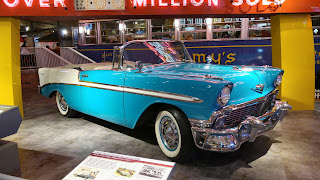 I will admit it. I don't use public transportation here in Metro-Detroit. After all, this is the Motor City. We build cars here, so why have buses? That has been the attitude around here for decades, but perhaps things are changing. Perhaps we might soon have a well-funded Regional Transit Authority. Then maybe I'll have reason to use public transportation.

I'm not averse to using it. I have used it in San Francisco, Portland, Washington, DC, Chicago, San Diego, and even in places like Atlanta and Baltimore. But, you have to have a well-maintained, well-organized system, and we don't have that! We do have buses in this region, but it's difficult to get where you need to go without taking all day, and probably walking several miles!

In the past few years the State of Michigan finally authorized the establishment of a Regional Transit Authority. The RTA has come up with a plan, and there is a ballot measure this November that will set up the necessary property tax levy (we call it a millage here in Michigan) to fund the RTA for the next 20 years. I'm all on board. I'm ready to pull the lever for it! I'm also hoping to make use of this upgraded system to go down to Comerica Park and watch a baseball game. I'm looking forward to using the express bus service to get from Troy to the Airport. Of course, the transition will take time because the region has been designed with cars in mind. This is especially true out here in the suburbs!  But, if we're going to move forward and grow the region economically, there will be need for transit. The fact is, there is an ongoing movement toward mass transit around the world, we're just a few decades behind most every other area in the country.

I decided to write a piece on the subject in part because my mind was stirred yesterday by my attendance at a meeting of activists planning a forum to educate voters about the importance of regional transit. I joined in the meeting because I've been part of community organizing efforts the past few years that have been advocating for this. I've participated in community meetings and spoken to public officials. The other reason was the opportunity to listen to a conversation on the Diane Rehm show yesterday. The segment on sustainability and the move away from car-centered urban planning was coming on just as I pulled into the parking lot of the church where the meeting was being held. I didn't listen to the show till the evening, but it helped me better frame the issue. Times are changing, and if my community is going to move forward it will need to change. It won't be easy there will be lots of push back, but we must (I believe) move forward on this.

I will invite you to listen to the conversation. It's just under 50 minutes long.  You can listen to by clicking here.

I don't think we'll be moving completely away from cars anytime soon, but public transit would seem to me to be a key to moving forward.  If you live in Southeast Michigan/Metro-Detroit it will be important to be educated on this topic, because it will be important to the future of the region. There is a plan. Now we just need to guarantee funding!

Oh, and in my mind this isn't just an economic or an environmental issue, it's a justice issue!
Email Post
Labels: Community Organizing Metro-Detroit Public Transportation Regional Transit Social Justice