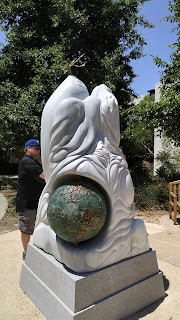 
This morning we again read responsively the Preamble to the Design. The Preamble invites us to consider who we are as Disciples. What beliefs and practices bind us together as a covenant community? Since we’re not a creedal people, we don’t require anybody to sign off on a lengthy statement of faith. But, we are bound together in our common commitment to be followers of Jesus. That means we’re part of a much larger body of Christ, and the Preamble gives voice to some of the beliefs and practices we hold in common as a covenant people.

I want to focus our attention on the third affirmation of the Preamble:

We rejoice in God, maker of heaven and earth and in the covenant of love which binds us to God and one another.

If you watched the opening ceremonies of the Olympics, you heard the President of the IOC point to the Olympic ideal of unity in diversity. That is our calling as Disciples. We are, as part of the larger body of Christ, bound together as one people in all our diversity, so that we might live in eternal fellowship with God our creator, and with the rest of God’s creation.

Sometimes, unfortunately, we fall short of our covenant obligations. When that happens, we need to hear a word from God that calls us back to our first love. If you read the Prophets carefully, they offer themselves to the people as voices crying in the wilderness calling the people of God to hold fast to the covenant God made with them. The prophets often remind the people that God isn’t impressed with their offerings and sacrifices. They tell the people that what God truly desires is that the people “cease to do evil, learn to do good” (Is. 1:16-17).

That brings us to Psalm 50, which describes a courtroom scene. God calls the court to order, and brings a suit against the covenant people. God can’t keep silent any longer, because the people have failed to keep their side of the covenant. In this courtroom scene we learn that God isn’t impressed with their worship services. They can bring all the sacrifices they want, but that won’t help. What God wants is for the people to simply give thanks and walk in the right way. That means taking the right path in life, which involves acting justly.

It will be helpful if we understand the meaning of this covenant relationship that bind us to God. So, remember the story of Ruth and Naomi. Ruth could have gone home to her own people after her husband died, but she pledged her loyalty to Naomi and to Naomi’s God. She told Naomi: “Where you go, I will go: where you lodge, I will lodge; your people shall be my people, and your God my God” (Ruth 1:16). This is a wonderful example of a covenant statement that is often used in wedding ceremonies, but more importantly it is a statement of commitment to God and to community.

So the question is, if we’re part of a covenant community, what does that require of us? What is the right path for us to take?

I appreciate the words of Arthur Van Seters, a now deceased professor at Knox College in Toronto:

When God’s covenant requirements are diminished, covenant with God is weakened and results in the impoverishment of human relationships within the community. [Preaching God’s Transforming Justice, p. 346].

He goes on to say that our contribution to society as Christians who live in a modern democracy is rooted in our relationship with God. The people for whom this Psalm was first written lived in a theocracy. They didn’t separate church and state like we do. But even if we don’t live in a theocracy, and even if there is this wall of separation, as citizens who are Christians our relationship with God should influence the way we live in society. As Van Seters reminds us: “Their worship becomes authentic when they make this connection” [p. 346]. Or, as Isaiah put it:   “seek justice, rescue the oppressed, defend the orphan, plead for the widow” (Is. 1:17).  The prophet Micah put it this way:

He has told you, human one, what is good and what the Lord requires from you: to do justice, embrace faithful love, and walk humbly with your God. (Micah 6:8 CEB).

These are the principles that define our covenant relationship with God and with God’s creation. This is why God cannot keep silent!

We’re hearing this word even as we’re living through a most interesting election season. Unless you’ve chosen to become a hermit, you know that the two major parties have chosen their presidential candidates. Unless something unforeseen happens, for better or worse, one of them will be our next President. But, that election is three months away, so we’ll have to endure three months of TV ads and mail boxes filled with flyers from both candidates and parties. In case you haven’t heard, the pundits believe this is going to be a rather nasty political season. But, it won’t be just the parties who are talking. If you’re on Facebook or Twitter or really any other social media site, you will be inundated with political fare. You may even add to the nastiness with your own posts. Some of you will decide at the end of the day to simply de-friend both longtime friends and family because their views are different from yours.

Since I’ve been a political junkie throughout my life, it’s hard to separate myself from the fray. I may have told you before that I first got involved in politics as a ten-year-old. I couldn’t help it. Both my parents were deeply involved with a particular political party. I knocked on doors and worked in party headquarters long before I could vote. When I voted for the first time in 1976, it was the same year that eighteen-year-olds could vote for the first time. I’ve tried to vote in every election since. That’s largely because I was taught that it was my responsibility as a citizen of this country to do so. You may disagree, but that is how I was raised and how I continue to feel about things.

As you know, American politics can be messy. We’re never given perfect choices, but sometimes we’d rather have different choices than what we’re being offered. Since that’s the system the nation’s founders set up, it will be the system in place until the nation chooses to amend the Constitution.

But back to the message of the Psalm. What is the right path in life? The Psalmist declares in verse 23: “The one who offers a sacrifice of thanksgiving is the one who honors me. And it is to the one who charts the correct path that I will show divine salvation” (Ps. 50:23 CEB).

As God declares through the voice of the Psalmist, our songs and hymns are fine. There is no one perfect order to worship. So we don’t have to worry about finding the proper order or the proper songs, because what God wants from us is to come before the throne of God with thanksgiving. Then, God will show us divine salvation. That is, we will experience God’s healing and wholeness. That is our calling as Disciples. We are called to be a “people of wholeness in a fragmented world. As part of the one body of Christ we welcome all to the Lord’s Table as God has welcomed us.”