Loss of the Theological Middle 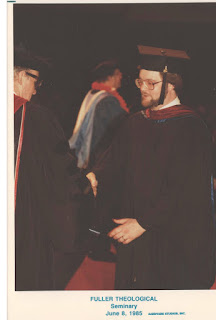 My  friend Jose Morales shared on Facebook the post written by Phillips Theological Seminary president, Gary Peluso-Verdend. The piece is titled "Confessions of a Seminary President." The essay as a whole is well worth reading, for it speaks of the challenges presented to seminary education today, but I wanted to address the first confession, in which he points out the loss of the theological middle,

The middle is gone. When I was in seminary as a student (1977-81), there was most definitely a theological middle. The 1980s and the creation of The Christian Right had not happened yet. Professors could call themselves “evangelical liberals” and that was not an oxymoronic appellation. Even when I came to Phillips in 1993, there was something of a theological middle. Today, not so much. The culture has divided out like wars within religions (the churches have drunk the same Kool-Aid), with orthodoxies being re-asserted or invented in order to create a boundary and sometimes division between Us and Them.

My best guess is that Gary is about three (or so) years older than me. He started seminary the year I started my sophomore year of college, and we received our Ph.D.s (from different schools) the same year.  So, his journey has paralleled mine, though I've spent the bulk of my vocational life in the parish and he in theological education.

He notes that we have lost the theological middle. As with every other area of life, we seem to have moved to polar opposites. He notes that once one could refer to one's self as an "evangelical liberal" and that this would not be considered an "oxymoronic appellation." That maybe true, but there are those of us who would rather be bridge builders than wall builders. That means living in the somewhat messy arena of the middle. Gary received his Ph.D. from the University of Chicago, an institution that is usually considered a hotbed of theological liberalism. I received my Ph.D. in Historical Theology from Fuller Theological Seminary, a flagship evangelical school. My theology has moved more to the left over the years, and my social views even further left, but I mourn the loss of the middle, if it is truly lost. There is wisdom to gain from folks all along the theological spectrum. We have to read carefully, and know that not everything is worth keeping, but let's not write each other off. I value my education from Fuller, even if I might not be able to fully ascribe to its statement of faith (for the most part I can, but I might have to nuance a bit). I also value I've learned from folks on the liberal side of the ledger. So, maybe it's time to reclaim the appellation of "liberal evangelical or "evangelical liberal" for the good of the church and of humanity!
Email Post
Labels: Evangelical Liberals Fuller Theological Seminary Gary Peluso-Verdend Jose Morales Liberal Evangelicals Middle Way Theological education Theology

Steve Kindle said…
If there were no extremes there would be no middle!

The "middle", as it were, is inhabited by those who think they can determine what is excessive and what is not. They believe moderation is where the truth is found. I find this to be no less extreme than either side. It is still a truth claim no matter how you cut it. In doing so, it separates itself from all others.

The issue of wall or not is not due to right or left, but to the attitude taken by each side, (and not by all on either side). A temperate attitude toward one's views —left, right or middle— is what is called for.

Let’s face it, if the “middle” had its way, there would be no liberation theology, no feminism, no free church movements, no anything new, (just to name a few contributions) and “orthodoxy” would be strictly controlled. Only the extreme (as it were) promotes growth.
12:49 PM

Robert Cornwall said…
I guess it depends on how you define the middle. I see the middle as being a place of openness to learning from differing voices. When I was at Fuller, an Evangelical seminary, in the 1980s, I read liberation theology, feminist theology, critical scholarship, etc. So, maybe what Peluso-Verdend and I would call the middle is that place of a temperate attitude where we don't read out those with whom we disagree. Instead of walls we build bridges. At least, that's my mantra!!
4:51 PM