The Millstone of Student Loans 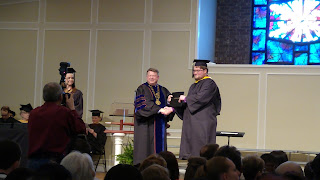 My son is a recent graduate of a private Christian college. Like most college students, except perhaps those able to get into a few elite schools with huge endowments, he had to take out student loans. He has amassed a significant debt (as is true of most recent graduates) and now must pay off the loan. Not only that, but he's already accrued significant interest debt.

Back in the day, I too received student loans (mostly during seminary), but there was a major difference between the rules then, and the rules now, and that's the millstone I want to address. From the moment that Brett received his first loan, interest began to accrue. Interest continues to accrue, though he is not set to begin payments for several months.  If he goes to graduate school and defers the loan (as I deferred my college loans and then seminary loans during my two graduate stints) then he'll still be accruing interest.  I believe that this is not right or fair.

During the primaries there was a lot of talk about making college education free. That sounds good at one level, but I'm not sure that it's the best way to reform the system. It's important to note that the schools under consideration are public colleges, not private ones. If college becomes free, will colleges/state's limit access by raising entrance requirements, making it more difficult for students who don't have high SAT scores or high GPAs to get access to higher education?

Left out in the cold are colleges and universities who often fill an important gap. Although many Christian colleges are very selective in their admissions, many others will take a chance on a student who might not have the best scores or the best GPA, but show promise. I know that due to my own decisions in high school to forgo math after 9th grade, my SAT math scores were extremely low. I might have gained entrance to a community college, but not a 4 year public university. NCC looked at things a bit differently. I went to college, and did well. I eventually went on to graduate school and earned a master's and a doctoral degree. You could say that I performed well even though my SATs and GREs aren't the best!

So, back to my point about student loan interest. An important fix that would make life a lot easier for college students and recent graduates, as well as those who need to defer their payments during graduate school, is to return to the rules in place when I was a student.  No interest should be charged while a student is in school. No interest should be charged during the grace period that allows graduates to seek employment. No interest should be charged during periods of  deferment. We can do this now. There was a fix in the works a year or so ago, but it has been abandoned and forgotten. Let's change that so our young adults who go to college (or adults of any age who go to college and graduate school) can flourish. There are other needed reforms, but let's start by returning to a just and fair practice from yesteryear!
Email Post
Labels: College Education Education Reform Fairness Student loans

John said…
There are many ways to address the problem, and to address the greater problem of student debt which has already been incurred. There just is not the will to do so. This lack of will continues even though the presence of obscene amounts of student debt has fundamentally altered the American Dream - former students with $100,000 of stendent debt are not going to qualify for a a new mortgage nor even for a new car loan.

We can advance hundreds of billions of dollars to save the banking industry from its own fraud but we can"t spare a few points worth of interest for our future middle class. We can continue to lend money to banks a 1/4% interest but we can't loan money to our children at anything less than market rates!?! Over the last 40 years we have stripped our state universities of their subsidies and thus shifted the entire cost to the students. Before my generation the GI bill made college education affordable for my parents. When I went to college state subsidies for the institutions allowed them to make education affordable for us. Now we shift the cost entirly to our children and wonder why they have so much student debt, why they are not getting married, and why they are still living at home!?! This is perhaps the single most destructive force undermining the middle class in America.

This is a scandal and really must be tackled head on by our state and federal governments.
7:09 AM

John said…
This comment has been removed by the author.
7:10 AM