Coming Together -- An Addendum 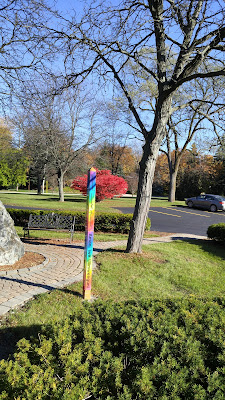 I thought about simply adding an addendum to the post I wrote last night and set to appear at 3 AM, EST. When I wrote that post I remained confident that by the time I went to bed the candidate I voted for would be coming out for her victory speech. That didn't happen. When I went to bed around 12:15 it didn't look good, though I remained hopeful. I woke up to President Donald Trump. I'm concerned. I'm anxious. I'm not really afraid for myself, but concerned about my neighbors, especially those who are immigrants and who are Muslims. I don't know how they will fare in the short-run. There will be other elections that can change things, and so we can persevere.  But more than anything there is work to be done.

One thing I learned last night is that not only is there anger at the system, but that a whole swath of the American populace has felt abandoned and unheard. They live in places like rural Michigan, Ohio, Wisconsin. They live in rural California, Oregon, and Florida. Yesterday, they came out to vote in huge numbers, even though Donald Trump really lacked an infrastructure. We who feel called to ministries of justice need to pay attention to these voices.

Something I've learned from Rev. William Barber, a clarion voice of justice in our time, is that for too long politicians have sought power by dividing people who have similar concerns from each other. He has spoken and written about trying to connect African Americans in North Carolina with working class whites who have lost jobs and hopes for the future. My friend Luke Allen, with whom I worked in community organizing, has been speaking of this for some time and now I understand why he feels the need to organize the region from which he hails, a predominantly white, working class region of northern Michigan. I should understand this better, because I grew up in Southern Oregon, in a region that was once a prosperous lumber and agricultural region. The lumber industry is largely dead. Klamath Falls isn't the same city that I grew up in.

If we fail the hear this voices then we will be doomed to irrelevancy. But if we understand the fears and the anger, then perhaps we can work together for a new future. I am a pastor of a church in an affluent Detroit suburb. The city is pretty diverse (about 20% Asian-American), but bringing everyone into the conversation won't be easy.

Last night, as I tossed and turned, unable to truly get to sleep, I had a "come to Jesus" moment. I heard again that call to build bridges not walls. I need to start here in Troy, the city in which my church building, if not most of the members, sits. Yesterday we served as a polling place. More than a thousand people came through our doors, most of whom didn't even know we were there. I don't know how they voted, but perhaps the peace pole that sits in the circle in front of the church, was seen. Perhaps we have the beginnings of a new witness to our community. I had several interesting conversations.

I am anxious and concerned. Yes, perhaps even a bit angry. But as one of my closest friends from college reminded me -- it's time to roll our sleeves and get to work. Yes, we have a spiritual infrastructure project. It's called "bridge-building!" As we do that, we who are Christians and other people of faith need to remember the one in whom we live and move and have our being.