Go and Do the Same: Transform the World - Stewardship Sermon for Pentecost 26C 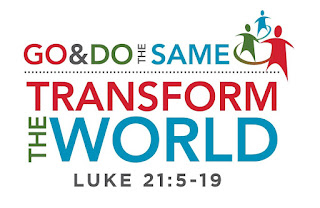 
Tuesday brought  a divisive and often bitter election season to a close. There are some who are happy and others who are not. At this point the future is uncertain, making many Americans concerned and even fearful. We will need to listen to each other’s hopes and dreams and keep each other in prayer. Because I know this congregation, I know that we didn’t all vote the same. But, I also believe that despite our political and even theological differences, as followers of Jesus we are bound together by our common love of God and our neighbors. I pray that the message of the prophet Micah will be on our hearts and minds as we move forward into the future. That message is simply this: What God requires of us is that we “do justice, embrace faithful love, and walk humbly with your God” (Micah 6:8 CEB).

Our General Minister, Sharon Watkins, sent out a pastoral letter about the election that I think speaks to our need to discern God’s way forward, reminding us that the Gospel is our guide.

The Gospel does not change with an election; what the Gospel requires of us does not change. Jesus’ first inaugural address began with these words, “the Spirit of the Lord is upon me because he has anointed me to bring good news to the poor…” (Luke 4:18) God, now and always, is on the side of the poor, and we who follow Jesus must be also. No matter who is in charge of our governments, we are charged with loving God and loving neighbor, even in costly, self-sacrificial ways. We are called to be loyal to the reign of God.

While we process the election results and ask what they mean for us as Christians living in America, we have gathered for worship on what we’re calling Commitment Sunday. This means that I’m tasked with preaching another stewardship sermon. This will be my sixth such sermon drawn from the Gospel of Luke. The underlying theme of these readings is Jesus’ command to “Go and Do the Same.” That command emerged from the question: “who is my neighbor?”  Jesus responded to that question with the parable of the Good Samaritan. When he finished telling the story, he asked the man who he thought was the neighbor after hearing the parable?  The man answered:  “the one who showed mercy.” Then, Jesus told him and us to “go and do the same” (Luke 10:25-37). Each of the five previous texts we’ve looked at, beginning in June, raises the question of who we are as God’s people in relationship to the world in which we live. Now that we’ve reached the end of the road, we’re faced with an “apocalyptic” reading that invites us to stay faithful to the end even when things get tough.

This reading is a difficult one to use for a stewardship sermon. There’s no command to be cheerful givers. In fact, there’s nothing here that specifically speaks to the use of money. If anything, it raises questions about institutions and buildings.

Whenever we hear Scripture read, it’s helpful to know the context. In Luke 21, Jesus and his disciples are visiting the Temple in Jerusalem after he entered the city in triumph. That means this is a Holy Week text! Having entered the city, he’s taking in the sights. His companions were quite impressed with the Temple. They marveled at its beauty and grandeur.

Perhaps you can understand their feelings at seeing the Temple. It might have been their first time to Jerusalem. The Temple was grander than anything they had ever seen. When I was on my sabbatical in England, I visited a number of cathedrals, including Salisbury, Bath Abbey, Westminster Abbey, and St. Paul’s Cathedral in London. They are awe-inspiring. When I went to St. Paul’s for Sunday worship, everyone seemed to be  taking pictures, even though picture-taking was against the rules. It was so impressive that you had to have a record of your visit. When I went inside Old Central Woodward for the first time, I began to understand why some of you treasure that place. It too is magnificent.

Jesus, on the other hand, wasn’t all that impressed.  According to Luke, he told his companions that before too long this grand Temple that Herod built would be nothing more than a pile of rubble.  When they asked when this would take place, he answered  with an apocalyptic message. Our reading this morning is the opening portion of Luke’s  “Little Apocalypse.” The reason it’s called the “Little Apocalypse” is that it is shorter than the Book of Revelation! This “Little Apocalypse” actually ends in verse 28 with the words: “Now when these things begin to take place, stand up and raise your heads, because your redemption is drawing near.”  In other words, it will soon be time to sing: “Soon and very soon, we are going to see the king!”

Now, even though Jesus lists some possible signs that will take place before our redemption comes, don’t get too excited. The end might get delayed. The important thing to remember is that you may suffer persecution and even execution, but don’t worry about preparing your defense. The Spirit will give you your words when called upon to testify. If you continue reading Luke, you’ll discover that this is Jesus’ impending fate. But don’t worry,  “not a hair on your heads will be lost.” The good news, according to Jesus, is that if you hold fast to the gospel, “you will gain your lives.” That is because, “our redemption draws near.”

So what does this have to do with stewardship? I would suggest that stewardship fits in this conversation, because it’s related to community. When Jesus tells us to hold fast, I don’t think he means we should do this alone. No, I believe he intends for us to be part of a community through which the Spirit works to sustain as we engage with God in work that transforms the world. While there’s no mention here of the Lord’s Table, we are in the midst of a nearly year long conversation about the connection between the Table and God’s mission in the world. This is the concept we’ve been exploring by reading Nora Gallagher’s book The Sacred Meal and participating in Ruth Duck’s presentations last weekend. There is much more to come between now and the end of May.

Part of creating this community that will sustain us through thick and thin, involves the use of our finances. To be a steward is to be an agent of God’s realm. Ruth Duck used the word “kindom” to describe the Kingdom of God. When we use this word, we speak of our connection as kin, as members of Jesus’ family. As members of the family, who gather at his Table, we each contribute as we’re able to its sustenance, with glad and generous hearts.

While the Bible’s apocalyptic texts can be difficult to hear and embrace, the contrast that they bring out between the old age and a new age helps us think about what we ultimately value. We invest in the things and the people who mean the most to us, and that includes the work of God in the world.

Ron Allen has written that “money is an agent that can continue and even intensify the effects of the old age.”  I’m reading a biography of President Grant, who governed at the beginning of what Mark Twain called the “Gilded Age.” In the epigraph to the chapter on the “Gilded Age,” the author offers an excerpt from one of Mark Twain’s writings. It reworks the opening lines of the Westminster Confession, which once served as the doctrinal guide for Presbyterians. Twain’s version goes like this:

Q. What is the chief end of man?

As followers of Jesus, hopefully we will answer the question of humanity’s chief end differently. When it comes to stewardship, Ron Allen suggests this alternative vision:  “we can use money to promote the purposes of the realm, and to bring as many qualities of the realm into expression as our dollars allow.” So, will you invest in the old age or the new realm of God? Indeed, will  “we use our money to help transform the world?”

It won’t be long before Jesus ends up hanging on a cross.  He faced execution, but he held fast. Yes, and he gained his life in the resurrection.  He held fast, will we? If we choose to hold fast, how will we invest in God’s realm so that the world might be transformed? That is the ultimate stewardship question.