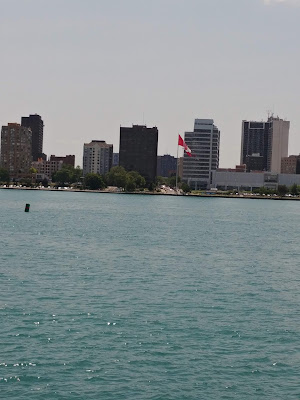 Under the current administration that is leading the United States, there seems to be an intentional effort to antagonize neighbors, near and far. Our President seems intent on turning long standing friendships into enemies, while embracing those who have demonstrated less than honorable intentions toward us (that is Vladimir Putin and Russia). He has been especially antagonistic toward our neighbors to the north and to the south, countries with which we share borders, and with whom we have exchanged trade and more over the years. It's not that we never have problems. Neighbors can have disputes big and small, but at the end of the day they treat each other with respect (at least when it comes to Canada and Mexico, we hope for good relations). I've lived a significant portion of my life in California, which is near the Mexican border. California's population is diverse, with immigrants from the South and elsewhere contributing to its economy and its culture. Now, I live in Michigan, which shares a border with Canada. In fact, if you go to downtown Detroit, you can look across the river, and see Canada lying to the south. Yes, Detroit sits to the north of Windsor.

Having peered across the river yesterday into the land of Canada, I began thinking about that cross border relationship. I've visited our neighbors several times in the course of the past ten years. They're good people over there. Very friendly and polite (at least that's my experience). As I pondered that view across the river to our Canadian neighbors, I thought about the growing anti-immigrant sentiment in the United States. I thought about the President's attempts to not only deport persons who are here without proper documents, so-called "illegals," but also his desire to cut legal immigration in half. Economists generally believe this is bad policy. Immigrants bring many economic benefits, contributing to the overall economy. This occurs at both among skilled and unskilled persons. Besides many bring with them an entrepreneurial spirit. Morally, the rhetoric toward immigrants, whatever their status, seems over-the-top and rather dangerous. It can lead to violence toward immigrants, as well as policies that are discriminatory at best. Case in point is the ill-considered policy of separating children from their parents who cross the border, children who might be as young as one years old. Then there is the closed heartedness when it comes to welcoming refugees fleeing violence and persecution.

I am a citizen of this country. I love my country. Right now, however, I'm not overly proud of our country. I see a President who is appealing to our worst instincts as a people. He has essentially taken over a political party, with its leaders fearing to cross him. Thus, Congress does nothing to stop the madness. The President is attending the NATO summit, which is a gathering of our Western allies, most of whom he's antagonized --- though he seems to get along with President Erdogan of Turkey, who shares Trump's penchant for authoritarianism. Before he returns to these shores, having insulted and alienated his allies, he'll go hang out with President Putin, whom he feels rather close to, even as Putin is intent on upsetting the balance of power in the world. It's not that I want bad relationships with Russia, but Putin is not a person who can be trusted.

As I said, the President is appealing to our worst instincts, and that's dangerous. If we look back into history we can see what happens when we give into those kinds of instincts --- slavery, the Trail of Tears, the Asian Exclusion Act, covert operations in Iran in the 1950s, which set up the revolution in the 1970s, and more. We are not a perfect nation, but we have foundations that can turn us around. We can, to us religious language, repent and turn back from these base instincts. Then we can be good neighbors. Let's send a message to the President. To do that will likely require a Democratic victory in November (and Democrats are not saintly either, but they are the opposition, and that's what is needed now).

Having focused on politics, I will turn to faith. May we love our neighbors as Jesus and Moses directed! Remember that Jesus had a rather broad definition of neighbor!

Robert Cornwall said…
Gary, most liberals do not believe in open borders. That is a lie that the President uses to stir up anti-immigrant sentiment. We wish to have secure borders, but open hearts to immigrants. Yes, I would like policy to reflect the spirit of Jesus -- not the liberal Jesus but the Jesus I encounter in the Gospels -- i.e. Matthew 25.
2:17 PM

Unknown said…
"most liberals do not believe in open borders." You'd never be able to prove that based on the news. Every time I see a liberal on TV, or YouTube, they are either holding a sign that says "No Borders", or they are complaining about the US arresting people for crossing the border illegally.

If US policy reflected the "Jesus" you claim to find in the NT, why wouldn't that violate the "separation of church and state"? And, since you are a "progressive Christian", why do you take Matthew 25 literally? Or do you?
5:22 PM