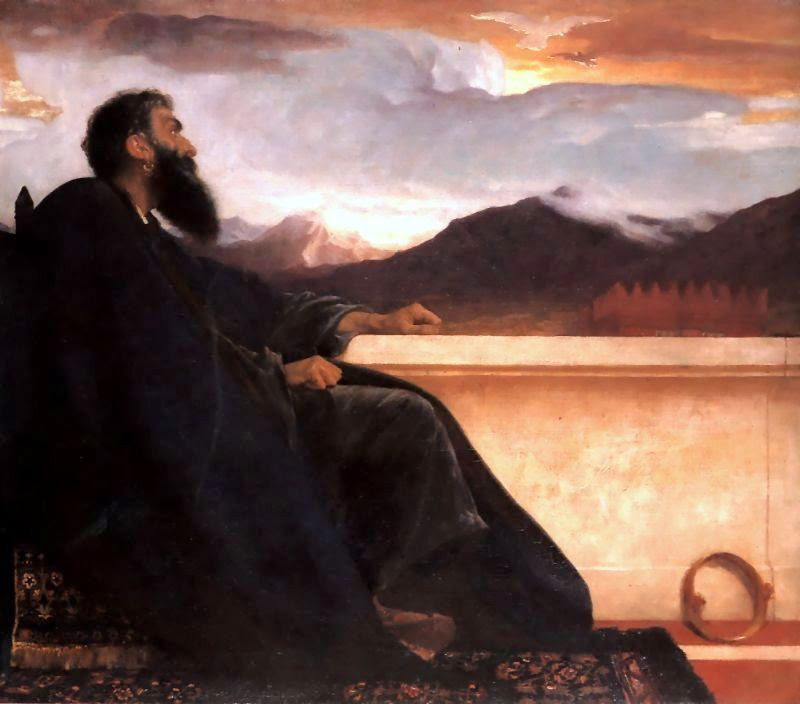 7 Now when the king was settled in his house, and the Lord had given him rest from all his enemies around him, 2 the king said to the prophet Nathan, “See now, I am living in a house of cedar, but the ark of God stays in a tent.” 3 Nathan said to the king, “Go, do all that you have in mind; for the Lord is with you.”

4 But that same night the word of the Lord came to Nathan: 5 Go and tell my servant David: Thus says the Lord: Are you the one to build me a house to live in? 6 I have not lived in a house since the day I brought up the people of Israel from Egypt to this day, but I have been moving about in a tent and a tabernacle. 7 Wherever I have moved about among all the people of Israel, did I ever speak a word with any of the tribal leaders of Israel, whom I commanded to shepherd my people Israel, saying, “Why have you not built me a house of cedar?” 8 Now therefore thus you shall say to my servant David: Thus says the Lord of hosts: I took you from the pasture, from following the sheep to be prince over my people Israel; 9 and I have been with you wherever you went, and have cut off all your enemies from before you; and I will make for you a great name, like the name of the great ones of the earth. 10 And I will appoint a place for my people Israel and will plant them, so that they may live in their own place, and be disturbed no more; and evildoers shall afflict them no more, as formerly, 11 from the time that I appointed judges over my people Israel; and I will give you rest from all your enemies. Moreover the Lord declares to you that the Lord will make you a house. 12 When your days are fulfilled and you lie down with your ancestors, I will raise up your offspring after you, who shall come forth from your body, and I will establish his kingdom. 13 He shall build a house for my name, and I will establish the throne of his kingdom forever. 14 I will be a father to him, and he shall be a son to me. When he commits iniquity, I will punish him with a rod such as mortals use, with blows inflicted by human beings. 15 But I will not take my steadfast love from him, as I took it from Saul, whom I put away from before you. 16 Your house and your kingdom shall be made sure forever before me; your throne shall be established forever.

As we have moved through 2 Samuel, we have seen David consolidate power. He had mourned over Saul, but willingly took control of the nation, though that took time. Remember he reigned over Judah for seven years at Hebron, before making Jerusalem his capital. As we arrive at chapter 7, David has reached the peak of power. Now, he has time to ponder the future. He looks around, sees he has a palace made of cedar, but the Ark still resides in a tent.  It’s time to build something more permanent, something grander. He confesses his desire to build a home for God to the prophet Nathan, who initially gives the okay. But, as we will see as we read further, God has other ideas.

Nathan thought that David was on to something. Now that the kingdom of Israel had stabilized under David’s leadership, with a permanent capital, allowing David to build a nice palace out of cedar, surely it was time for God to settle down and have a permanent domain. Israel’s days of being a nomadic people seemed to be over. Later, after Nathan returned home, God spoke to him and suggested that Nathan had been a little hasty in agreeing to David’s plans.

The message God sent to David through Nathan wasn’t quite a rebuke, but a reminder that God was not bound by a particular place. God had been moving with the people, living in tents, since Israel left Egypt. In fact, Yahweh had never had a permanent shrine (God apparently forgot about the shrine at Shiloh, where Eli presided, and Samuel apprenticed). In this word given to David through Nathan, Yahweh wanted David to know that no request for a permanent home had ever been made by God. Yahweh was perfectly happy, living in the Tent, following the people wherever they went. In other words, God isn’t tied to a particular place. David’s successor might build a Temple, but the Temple is of less importance here. Instead, we have the establishment of a new covenant relationship. God promises to make David a house for God by establishing forever David’s lineage.

This chapter marks an important sea change in the Deuteronomic history of Israel. Here we have the establishment of a Davidic theology, that will stand alongside the covenant theology that has provided a foundation for Israel’s life. Remember that earlier in 1 Samuel, God gave in to Israel’s demand for a king. Now, the promise is given to David that his lineage will go on forever. God doesn’t need a Temple to dwell in, if God is going to dwell within David and his line.

The lectionary creators end the passage in verse 14, where God promises to be the father to David’s successor, and he will be a son to God. That has a certain messianic feel. For Christians Jesus is the son, and God is the father. That might be the reason why we stop here, but the passage goes on to say that God might punish David’s successor, but unlike God dealt with Saul, “Your house and your kingdom shall be made sure forever before me; your throne shall be established forever” (vs. 16).  If, as we suppose, the final form of this book was written during the exile, this promise would provide important encouragement to a people who lived without Temple and king. If God is faithful to God’s promises, then the nation will continue. There will be a lasting legacy built upon the promise made to David. A king will arise. Now, moving forward no Davidic king would emerge. After the exile ended, a Temple was built, but no Davidic king arose. This, of course, gave room for messianic theologies, including the one that Jesus took hold of, to emerge.

For Christians reading this passage, which appears as well in the season of Advent (2 Sam. 1-11, 16 is designated for Advent 4B), this passage undergirds the promise of incarnation. It supports Mary’s song, where she declares that “He will be made great, and will be called the Son of the Most High” (Lk 1:31-33). Bruce Birch writes of this promise, “To read God’s enduring promise to David in this text today is to be reminded of the roots and challenge of our own messianic hope. To trust in God’s promise to David and to claim Jesus has having been born into the line of that promise is to understand God’s work as being endlessly engaged with the issues of justice and power that must be faced to establish God’s kingdom in every age. In the light of this biblical promise, the church must understand its own faith as being endlessly engaged with these same realities” [Bruce Birch, “1 & 2 Samuel,” NIB, 2:1259-12-60].

We can read this passage with disinterest, seeing it as little more than annals of the history of a long dead kingdom, or we can read it as a promise of incarnation. God needs no building to achieve God’s promises, because God is present in the line of David, which for Christians leads to Jesus, the Christ (messiah).  As Joni Sanken notes, regarding the church, “as Christ’s body here and now, is called to be a dwelling place for God and to acknowledge all God’s people. Our congregations must work to be spaces where everyone can be ‘someone’ and all can feel at home—even those whom society renders invisible” [Preaching God’s Transforming Justice, p. 333]. In other words, the messianic movement is a continuation (not a replacement) of the promise made to David, that God would be with David forever.