Time of Redemption - Sermon for Pentecost 6B (Psalm 130) 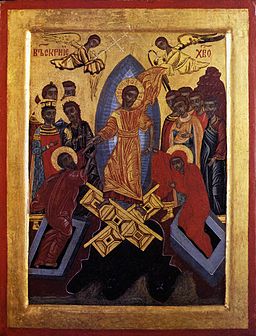 
Children as young as three-months-old, are crying out for the comforting arms of missing parents. Most of these families who have come to our border are trying to escape violence that probably originates here in the United States. I believe that the God who redeems Israel has heard these cries of lament, and invites us to do the same. Whatever our feelings about the immigration issue, surely the cries of these children touch our hearts. If we are God’s hands and feet and voices, then we have to answer the question: how will we respond to these cries?

We hear the voice of the Psalmist: “Out of the depths, I cry to the Lord. Lord, hear my voice!” The Psalmist cries out to God: “Let your ears be attentive to the voice of my supplications.” This is a song of lament that’s numbered among the Songs of Ascent. These are the songs pilgrims sang as they made their way to Jerusalem. This song is darker than the 133rd Psalm, which we heard last Sunday. This song has a penitential flavor that suggests something isn’t right. While the Psalmist doesn’t reveal the nature of the iniquities he has committed, he trusts that God will forgive them. Yes, God will redeem the people, because “with the Lord there is steadfast love.”

There is ambiguity present in the Psalm, because, as Pablo Jiménez points out, “the poet never describes the source of his emotional and spiritual pain.” That’s a good thing, because it allows anyone who suffers to pray this prayer that emerges from the depths of human experience [Preaching God’s Transforming Justice, p. 309].

Yes, “out of the depths, I cry to you, O Lord.” That is, out of the abyss that I find myself in, “I cry to you, O Lord.”  The word “abyss” is darker and more foreboding than “depths,” and as Elizabeth Webb points out the “abyss takes different shapes in individual and communal life, but we have had some experience of it, and not always tangentially.” It could be grief, depression, poverty, abuse, or maybe the loss of a job. Have you ever felt like you were in a pit and couldn’t get out?  Whatever this abyss might be, the God who redeems hears our cries and responds by being present with us. Now the question is: how is God present?

There is this desire within us to have God sweep in and rescue us, like Superman, but God doesn’t seem to work that way. I will admit that I struggle with the solution I’ve embraced. Theologian Tom Oord has been developing a solution that he’ll share with us in October. Tom suggests that  God’s love for us is relentless. However, God can’t rescue us by God’s self alone. God requires our participation, the community’s participation, in the work of redemption. We are the hands and feet through which God works to bring salvation.

So, where do we stand in this pilgrimage? As we march to Zion, what challenges does life throw our way?  Are they physical? How about relational or emotional challenges? Are you simply frustrated with what’s going on in our country? While we’ll be celebrating Independence Day on Wednesday, many of us are increasingly concerned about our nation’s core democratic values, which we inherited from the Founders. We get anxious when we see these values being eroded. While I believe the nation will survive these times, I am increasingly anxious about the toll this is taking on the people of this nation.

As we ponder the Psalm’s  message in our current context, perhaps its worth returning to the three days that mark the passage from Good Friday to Easter morning. In some traditions the time stretching from Maundy Thursday to Easter Evening is called the Paschal Triduum. We know what happens on Maundy Thursday. Jesus institutes his meal, is arrested, and tried. Then on Good Friday, we bear witness to Jesus’ crucifixion and burial. Finally, on Easter morning we come to the tomb and find it empty. We do hear the proclamation that Jesus has been raised from the dead, but what’s next?  The Gospels might differ in their presentation of these events, but they all agree that death could not contain Jesus. That’s Thursday, Friday, and Sunday, but what about Holy Saturday? What happened on that day? Does anything happen on Saturday that’s worthy taking note of? Is it possible that we are living in the space between Good Friday and Easter morning?

Scripture doesn’t say much of anything about Holy Saturday, which might be the reason we don’t do much with it. It’s just a quiet day of preparation for Sunday’s celebration. Some traditions, however, do have services on Holy Saturday. When Cheryl and I lived in Eugene, we visited my mother during Holy Week. It seemed as if her church had a service every evening, including Holy Saturday. I don’t remember observing Holy Saturday growing up in the Episcopal Church, but the current priest had introduced the Easter Vigil to the congregation. In the course of the service, which started with a baptism, the sanctuary was stripped bare and the lights were doused, and we left the sanctuary in silence. This service was intended to remind us of Jesus’ experience of the tomb, prior to the resurrection. This all took place more than thirty years ago, and I may be getting some of the details wrong, but I remember it being a moving and meaningful service that reminded me that Saturday shouldn’t be forgotten.

Like I said, Scripture doesn’t say much about what transpired on Holy Saturday, but the Apostles’ Creed does fill in that space. The Creed declares that Jesus “suffered under Pontius Pilate, was crucified, died, and was buried. He descended to the dead. On the third day he rose again.”

I realize we’re not a creedal people. As spiritual descendants of Campbell and Stone, we look to Scripture not the creeds for guidance. But this one sentence, “he descended to the dead” is intriguing, because it speaks to the forgotten day. It speaks to the depths that the Psalmist takes note of.  There are different English-language versions of the Apostle’s Creed. Sometimes the word dead is rendered as Hades or Hell, but however you render the phrase, it speaks of the reality of death. This raises a bunch of other questions, but for the moment, I’d like us to consider how the words of the Psalm and the reflections on Holy Saturday might speak to us about how God is present with us in Jesus in the here and now?

Michael Downey writes in his book The Depth of God’s Reach that Holy Saturday “is anything but empty, a silence that says everything about God’s unfathomable love for those caught in the jaws of death—even those of us mortals dwelling in darkness and the shadow of death.” [The Depth of God’s Reach, p. 8].  At the very least, might this word speak to our own sense of mortality?  We all know that death will come our way, but many of us seek to evade it or at least ignore it, until the last moment.

If we return for a moment to Holy Saturday, and the word we hear in the Creed, what we discover is that not only does God hear our cry, but God “enters into solidarity with the dead” through Christ’s descent into the realm of the dead. We don’t have to think in literal terms of a three-story universe to get the picture of Jesus entering the depths of human experience, so that God might experience the abyss of our lives. As Michael Downey puts it, “the belief that God’s love in Christ has penetrated the dark abyss between the living and the dead can bring consolation to those who mourn. There is no ‘place,’ ‘space,’ or ‘condition’ where God in Christ has not gone and will not go with the offer of light, love, and life. Absolutely nothing is beyond the reach of God’s mercy.” [The Depth of God’s Reach, p. 63.] He goes further to say that “any desolation or darkness we may know has been suffered and transformed by Jesus Christ.”

Too often we have envisioned God as somehow distant and aloof from our realities, but the message of Holy Saturday, as revealed in the Apostles’ Creed, is that in Christ’s descent we have a witness to God’s redeeming presence in our lives. Therefore, with the Psalmist we can put our hope in God, who has the power to redeem.