Be My Witnesses -- An Ascension Day Text 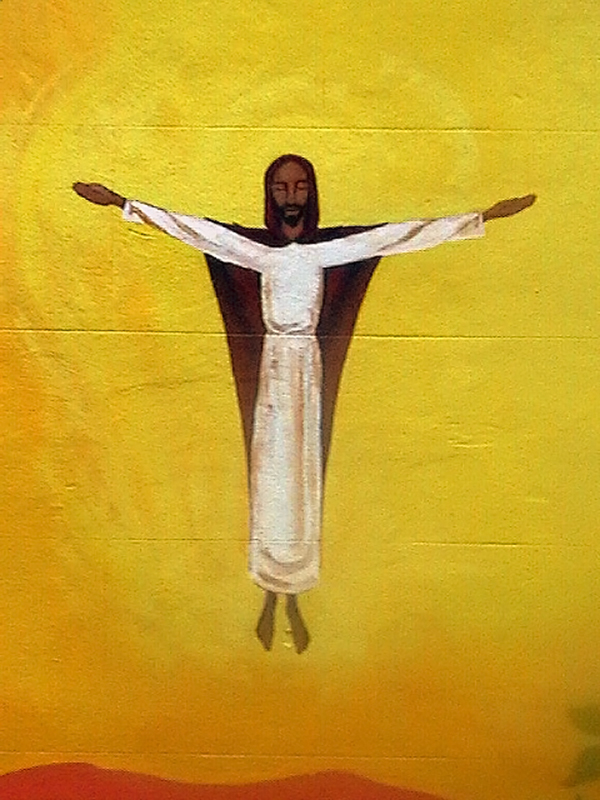 1 In the first book, Theophilus, I wrote about all that Jesus did and taught from the beginning 2 until the day when he was taken up to heaven, after giving instructions through the Holy Spirit to the apostles whom he had chosen. 3 After his suffering he presented himself alive to them by many convincing proofs, appearing to them during forty days and speaking about the kingdom of God. 4 While staying with them, he ordered them not to leave Jerusalem, but to wait there for the promise of the Father. “This,” he said, “is what you have heard from me; 5 for John baptized with water, but you will be baptized with the Holy Spirit not many days from now.”


6 So when they had come together, they asked him, “Lord, is this the time when you will restore the kingdom to Israel?” 7 He replied, “It is not for you to know the times or periods that the Father has set by his own authority. 8 But you will receive power when the Holy Spirit has come upon you; and you will be my witnesses in Jerusalem, in all Judea and Samaria, and to the ends of the earth.” 9 When he had said this, as they were watching, he was lifted up, and a cloud took him out of their sight. 10 While he was going and they were gazing up toward heaven, suddenly two men in white robes stood by them. 11 They said, “Men of Galilee, why do you stand looking up toward heaven? This Jesus, who has been taken up from you into heaven, will come in the same way as you saw him go into heaven.”

Today is the Day of Ascension. Eastertide extends forty-nine days, leading up to Pentecost, but before that moment, when the Spirit comes upon the community, the risen Jesus will depart from the disciples, but he promises not to leave them alone. Instead, as we see here in Acts 1, Jesus leaves them with a commission. "Be my witnesses." This commission (Luke's version of the Great Commission) starts where they reside in Jerusalem and then extends outward to the ends of the earth. Thus begins the message of Acts, the expansion of the Gospel outward from Jerusalem. There is, of course, a caveat. They must wait for the coming of the Spirit before venturing out into the world. That will come on the Day of Pentecost, some ten days in the future.

A number of years ago I took a Bible study group at the church I currently serve through the Book of Acts. I drew on lectures I had written for a class on the Book of Acts I had taught at a college years before that. In those presentations, I drew upon a popular commentary on Acts written by Michael Green, the recently deceased Anglican evangelist and teacher. In his book he laid out four important preconditions for evangelism that are rooted in Acts 1. So, to celebrate the Day of Ascension, I share my summation of his four preconditions.

1.  Obedience
Jesus commands the disciples to wait in Jerusalem until they received the baptism with the Spirit, which they did (v. 4, 12).

2. Prayer
In verse 14 we find that after Christ's ascension the believers returned to the upper room in Jerusalem and devoted themselves to prayer.  This prayer meeting served as the context for the outpouring of the Spirit on the Day of Pentecost.

3.  Unity
Both in Acts 1:14 and 2:1 we see that the believers came together for prayer and worship.  In Christ, they were one.  Green speaks concerning the importance of unity for our own day.

God's Spirit comes upon those who are united:  Those are the people he uses.  And the churches in the West have been bedeviled by individualism and disunity.  So much so that we do not even notice our own arrogance in the way we unchurch others.  We are oblivious  of our failings and our blindness, but very strong on some aspects of the truth which we are confident  that we have and others do not.  But the division frequently comes not from doctrinal roots but from personal. . . .  And the secularized modern world watches cynically at this supposed  embodiment of God's kingly rule, torn apart by different emphases and policies of mutual distrust and exclusion.  God cannot bless disunity, and he will not.  For then the church would be proclaiming a lie:  maintaining the reconciliation Christ came to bring to all who trust him, yet manifesting nothing but division.  It is only when men and women are clearly being reconciled with one another despite all their differences that skeptics will stop and take not of the Reconciler.


4.  Openness to the Holy Spirit
Jesus said wait for the gift of the Holy Spirit.  Only after the disciples had been filled with the Spirit could they have the necessary power to witness to the truth of Jesus Christ.  We find that this truth is emphasized over and over again in Acts, beginning in Acts 2 and continuing throughout the book.

Green points out with sadness how the modern church continually puts limits on how God can visit his people with the power of the Spirit.  We decide the proper channels or require certain signs.  But as we will see, God is not limited by our rules.  But our ability to receive is limited by our own closed-mindedness.  When the Disciples began to wait for the Spirit in the upper room they did not know what to expect, yet they remained open to what God would do in their midst.  In Acts 2 the reception of the Spirit is marked by a gift of languages.  In Acts 4 God brings an earthquake along with the gift of the Spirit.
Green writes:

We cannot tell God what gifts he should give us.  We cannot judge the reality of other people's gifts by those we have ourselves.  An attitude of openness is an important avenue to reception and to growth.  The Spirit is sovereign in his world and in his church.  The last thing we want to do is grieve him and get in his way.