Connections (Year C, Volume 3) -- A Review of a Lectionary Resource 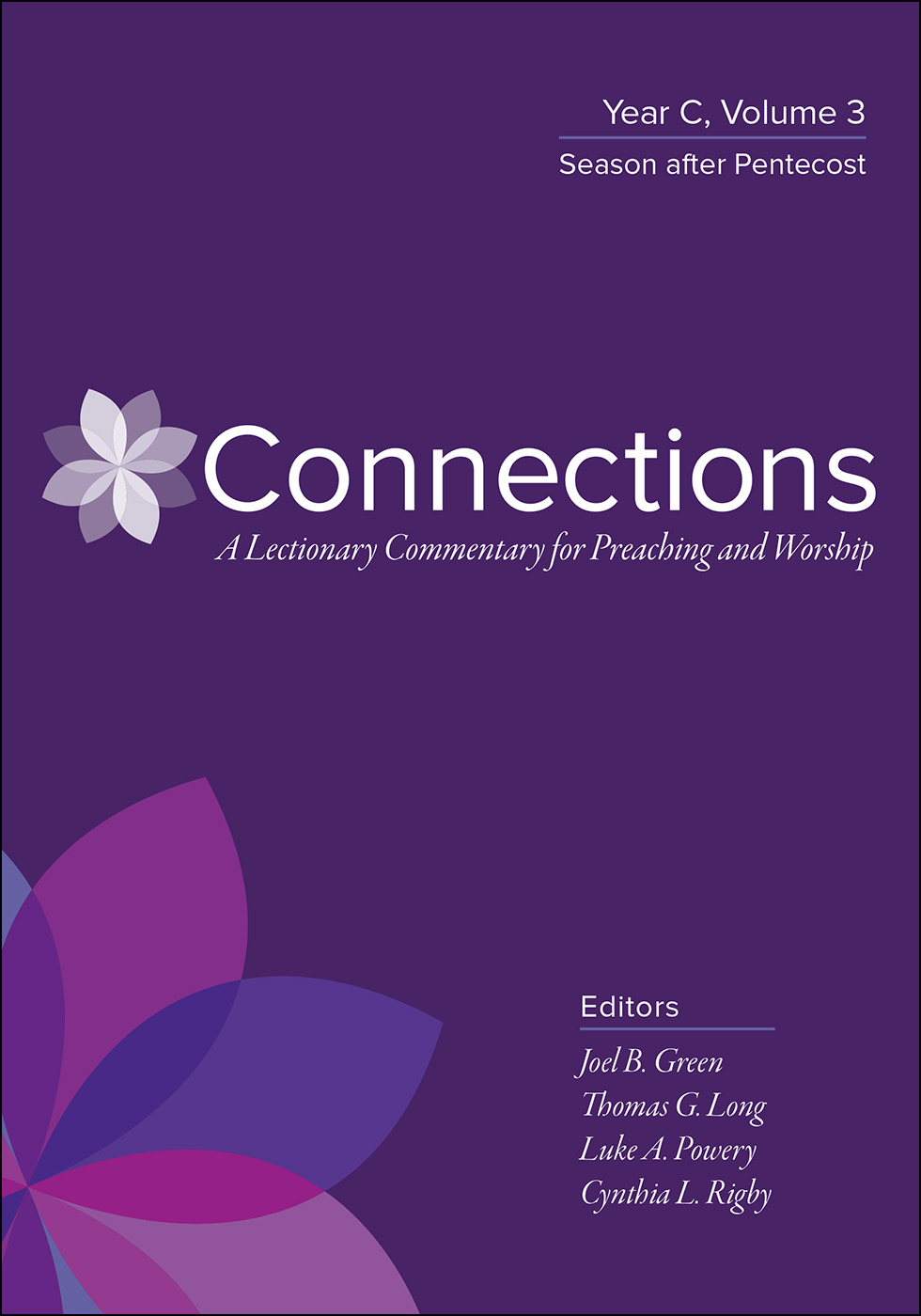 I am a lectionary preacher. The Revised Common Lectionary may not be perfect, but it does provide a sound basis for preaching that is rooted in Scripture. I’m of the belief that preaching, that becomes a word of God (using Barth’s three-fold Word of God formula) will be rooted in Scripture. Preaching from the Bible, however, does involve interpretation of the text so as to make that word living in the present. It is wise to look to others for wisdom and guidance. The good news is that lectionary preachers have been blessed in recent years by a plethora of new resources. Westminster John Knox Press has been a key contributor to this bounty. Among these treasures is the Connections series, the first cycle of which is now complete (Year C).  I will note that I’ve seen advertisements for the next cycle (Year A).

I reviewed the first volume, which takes one from Advent through Epiphany, on the basis of a review copy provided by the publisher. This volume was selected as Reference Book of the Year by the Academy of Parish Clergy (I chaired the selection committee). I then made use of a Kindle version of the second volume, which I purchased. The Kindle version is actually easy to use (and is more mobile than the hard copy). Now comes volume 3, which covers the Season after Pentecost. I was provided with a review copy for this volume. Because this season is lengthy—nearly six months—it is a hefty volume. While I’ve not worked through the entirety of Volume 3—it is a reference book after all—I can say that the quality of each of the three values is consistently good.

As I noted in my initial review, preachers and teachers (the assumption of the editors is that these volumes will be used not only by preachers but also by teachers and students of Scripture) might be wondering why add another resource to the shelf (or the Kindle)? Isn’t Feasting on the Word sufficient? The answer might be found in the founding principles of each series. The Feasting on the Word series (as well as the Feasting on the Gospels series) features four different commentaries, each written by a different person, offering a different perspective on the text (theological, pastoral, exegetical, and homiletical). Having used this series on a regular basis, I find them extremely helpful. Connections, on the other hand, offers two commentaries for each lectionary reading.  As to the connection between the two commentaries, Cynthia Rigby, in her remarks to the Academy of Parish Clergy, compared what the series seeks to do with Karl Barth’s quip that the preacher should approach the sermon with the Bible in the one hand and the newspaper in the other. In many ways, commentary 1 focuses on the first, and commentary 2 focuses on the second.

Commentary One seeks to locate the text in its broader biblical context, connecting the passage with the other lectionary selections as well as the larger biblical story. In other words, it takes a horizontal view of the passage. It does so in twelve hundred words. The second commentary (Commentary Two) seeks to build a bridge between the ancient text and our contemporary world. It takes a more vertical approach (at least chronologically). While addressing the modern world, the editors understand that if this series is to have a long life it can’t be so specific in its applications that it will be obsolete before the series is complete. While there are two commentaries for the first and second readings, along with the Gospel there is only one commentary provided for the readings from the Psalms, and it has a more liturgical function, seeking to connect the Psalm with worship. As I noted in my first review, personally, I wish they had treated the Psalms in the same way as the other texts, but this was an editorial decision, which may assume that preachers won’t preach as often from the Psalms as from the other passages.

Since this volume focuses on the season following Pentecost, it is important to note that with regard to the “First Reading,” which is generally taken from the Hebrew Bible, there are two readings for each Sunday. I will share the explanation offered by the editors: “There is the usual complementary reading, chosen in relation to the Gospel reading, but there is also a ‘semi-continuous’ reading. These semi-continuous readings move through the books of the Old Testament more or less continuously in narrative sequence offering the stories of the patriarchs (Year A), the kings of Israel (Year B), and the prophets (Year C)” (p. xvi). Both readings are handled together. Thus, the writer of Commentary One will offer a response to both readings in the same essay (still at 1200 words).

In addition to the two commentaries, the editors sprinkle through the volume excerpts from historical writings. Thus, they include a reading for Proper 9 that draws from Albert Schweitzer, which they title “Reverence for Life” (p. 131).  These are provided in the context of text boxes, so they’re separate from the larger textual offerings. They are also in a different typeface. As a church historian, I, of course, appreciate this, even if I don’t use anything from the excerpt. Just the thought counts, as it serves as a reminder that we are not alone in our interpretive efforts. Tradition might have something to say, whether ancient or relatively modern (as in the case of Schweitzer).

The series is edited by a team of four —Joel Green, Cynthia Rigby, Luke Powery, and Thomas Long. They are assisted by Kimberly Bracken Long, who oversees the essays on the Psalms (including recruiting the writers). Bo Adams is responsible for the sidebar readings.  A series like this requires a large group of people to bring accomplish the intended goals. This is not a one-person effort. Apparently, when the nine volumes in the series are complete (three volumes per liturgical year), there will be some two-hundred writers engaged in writing for the series (each writer is assigned three passages to provide a commentary). In addition, there is an editorial board of twelve persons. As to the background of the editors, one is a biblical scholar (Green), two are homileticians (Long and Powery), and one is a theologian (Rigby). The writers of the commentaries include pastors, biblical scholars, theologians. For those who do not know much about the Revised Common Lectionary, Jennifer Lord, one of the members of the editorial board, offers a brief account of the RCL at the beginning of the volume.

Each of these editors and the editorial team working with them believe in the value of lectionary preaching. At the same time, they also believe that it’s possible to dive deeper into the world of the text and in the world that hears the message emerging from the text. In their introduction to the volume, the write: "Connections is not a substitute for traditional scriptural commentaries, concordances, Bible dictionaries, and other interpretive tools. Rather, Connections begins with solid biblical scholarship and then goes on to focus on the act of preaching and on the ultimate goal of allowing the biblical text to come alive in the sermon." (p. xv).

Regarding the lectionary itself, Jennifer Lord, one of the editorial board members, reminds us that the lectionary is connected to the church year. This connection serves to root preaching in the present. With this in mind, she writes:

We read, not to recall history, but to know how those events are true for us today. Now is the time of the Spirit of the risen Christ; now we beseech God in the face of sin and death; now we live baptized into Jesus’ life and ministry. To read texts in time does not mean we remind ourselves of Jesus’ biography for half the year and the mission of the church for the other half. Rather, we follow each Gospel’s narrative order to be brought again to the meaning of Jesus’ death and resurrection and his risen presence in our midst. The RCL positions the texts as our lens on our life and the life of the world in our time: who we are in Christ now, for the sake of the world” (p. xiv).

Each of the authors seeks to answer that call—helping preachers hear a word for today in an ancient text. This requires examining it in its original context (commentary one). But it is not enough to remain in the ancient world. Therefore, the reason for commentary two.

As I write this review, we are early in the season after Pentecost. There is a much longer road to travel until we get to the next volume. Nevertheless, having used with regularity the first two volumes, and having used this third volume in my sermon preparation (and in my weekly lectionary reflection), even if I don’t quote a writer, I usually find something in the reading that triggers my imagination and my movement forward toward the completion of the sermon. Not every essay speaks in the same way. As is true for any resource like this, there will be unevenness (or at least perceived unevenness, depending on the end user's needs). Nonetheless, the quality found here is extremely high, so the editors should be commended for their work. So, if you work with the lectionary, my advice is: get ahold of this series and make good use of it. It should open up new vistas for all who open its pages.