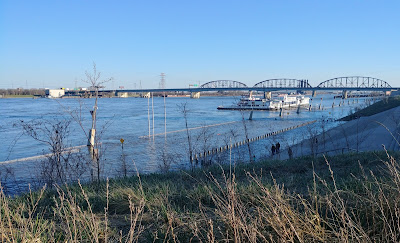 Amin is a Muslim friend with whom I have had many a conversation about things of faith, family, and the world. A group of us get together when we can to have conversations -- we usually gather at a local Tim Horton's and generally are sent packing at closing time. Amin contacted me to see if some of us could gather -- his invitation was last minute so most were unsure of gathering. But Amin and I could get together if nothing else. So we did. At first, it was just the two of us. We talked about religion, politics, the community in which we live. In the course of our conversations, the various eastern churches came up -- perhaps because my son is going to focus his thesis on medieval hagiography comparing a figure from the Church of the East (Iraq) and a Muslim figure yet to be determined. Whatever it was that we were discussing at the moment, a young man sitting nearby turned to us, noting he had overheard us talking. He revealed to us that he is a Coptic (Egyptian) Christian. So he entered the conversation. Before long our friend Padma joined us. Padma is Hindu. So here we were. A Muslim, a Hindu, a Coptic Christian, and a Protestant Christian pastor, having a conversation. It wasn't formal. Obviously, not all of it was planned. But it was enlightening.

Such conversations are, I believe, rather rare. I consider myself fortunate to live in such a religiously diverse community. The dynamics that led to these conversations might not happen in many communities because there is little religious and ethnic diversity. And, truth be told, many in our country would prefer things stay that way---that is, a homogeneous culture. There is a great fear of this kind of diversity. There is fear that it will "dilute" our culture, which apparently is defined by whiteness or Euro-centric Christianity. As for me, I've come to appreciate the diversity. It has enriched my life in ways I would never dreamed of growing up.

After a while, our Coptic friend got back to his studies and Padma had to get to family obligations. That left Amin and I to continue our conversation, which of course continued until the shop closed, and then (it was a warm evening) for another hour after that. Approaching 11 PM, Amin needed to go say his prayers.

Conversations like the ones I had Sunday evening are always learning experiences. Amin and I talked at some length about the teachings of the Quran (he had spent time during Ramadan working through the Quran and wanted to share insights). We talked about the Bible and how it came to be and how it differs from the Quran. We talked about the differing roles of Muhammad and Jesus. We both learned from each other, and as we did we continued our maintenance of a bridge we had built over the previous eleven years. New bridges need to be built, but those that have been built, also need attention.

The world will be a better place, if we'll just talk with each other -- and not at each other. That's a lesson some of our politicians need to learn -- especially the current resident of the White House.