Back from Disciples General Assembly 2019 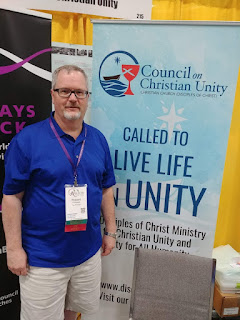 I'll begin by saying that we all go for different reasons and take home different pieces. We might return celebrating the near-unanimous passage of a resolution calling for the provision of educational materials concerning Transgender persons and the church, moving along the next step in our attempt to be truly inclusive. Or we might celebrate the call to stand with those who resist the government's attempts to prevent people of faith from caring for those who are seeking refuge, following the example of the Samaritan in Jesus' parable. Then there was the affirmation of full communion with the United Church of Canada. This is important as the Disciples have a small but vital presence in Canada. Having this affirmation further's ecumenical work in Canada. As an ecumenist myself, I have to wonder why it took so long. But that is the nature of things like this. Regarding business, it is revealing that there is little opposition, if any, to what many would consider highly contentious issues. What that suggests is that the conservative members of our denomination have chosen not to attend or speak. Whether that is a good thing or not is up for discussion. I'm supportive of the actions taken, but I know that it is not a unanimous position within the wider church. 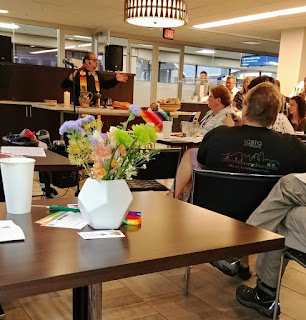 There was worship, which features preaching and music. Attempts are made to bring into the services a variety reflecting the different generations and ethnicities within the church. Of course, that often leaves some unsatisfied. Worshipping in an arena/convention hall leaves something to be desired. But it is the only way to gather as a larger church. The last two Assemblies have featured Disciples preachers, as opposed to bringing in people from the outside. The reasoning behind this being that we have good preachers worthy of hearing. This is true. There was variety in ethnicity, gender, and theology present. Interestingly, some of us find that the Sunday morning worship/preachers we encounter as we spread out from the Assembly can be the most fulfilling. Such was the case for Cheryl and me as we worshipped with a very unique church plant in Des Moines. It meets in a bakery, with an emphasis on reaching LGBTQ persons and emphasizing #BlackLivesMatter. The sermon was brought to us by the Rev. Justo Gonzalez II (a UCC minister and no relation to the historian of the same name).  Rev. Gonzalez encouraged us to bring our gifts (spices) into the life of the church and create new realities.

As pictured above, I spent some time in the Council on Christian Unity booth. I am a board member, so I thought it a good idea to represent our ministry. Even though we are the primary vehicle for our ecumenical and interfaith work as a denomination---one that has from the beginning emphasized the pursuit of Christian unity---ecumenism is not as central as it once was. We've added interfaith work and theology to our portfolio, all three of which are passions for me. However, we 're a small entity that is poorly funded and to my mind not given the respect due to a work that once was central to our being as a community of faith. We are composed of one employed staff person and a board (of which I'm one of the newest members). Our future is in doubt! But, I remain committed to the cause! I will add that this year we shared a dinner opportunity with the Disciples of Christ Historical Society (another passion), at which we heard from Peter Marty, Publisher of the Christian Century, speak about Charles C. Morrison, the long-time editor of the Christian Century, who took it from a small denominational paper to an ecumenical magazine (I'm a long-time subscriber). 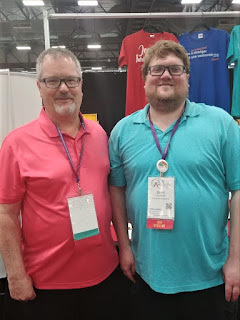 The most important piece of the time in Des Moines was being with our son Brett, who is a graduate student at Claremont School of Theology and like his father, affiliated with the Disciples Seminary Foundation. Brett worked the booth, attended some dinners, and did some networking as he looks to the future as one who has a passion for interreligious work and possibly engage in some form of work in the Middle East with Global Ministries.

I will close by noting my growing concern about the future of our denomination (like all denominations). I did see some positives. We have become more diverse as a denomination. Many of our newest churches emerge from ethnic minority communities. That's a good thing. But at the same time, most of our ministries are finding it increasingly difficult to fund themselves, even as local congregations face the same dilemma. So, what does the future hold for the institutional church? What will it look like in 5-10 years (after I'm retired)? I have encountered some really thoughtful, energetic, even visionary younger clergy. That bodes well. But there will be challenges as our congregations get smaller and fund become less abundant.

So that I don't end on a down note, I will embrace the theme of the Assembly -- Abide in me. That is the call, after all, to abide in Jesus. That I will do. Having opened the door, what were other experiences? What spoke to you, if you were there?
Email Post
Labels: Christian Church (Disciples of Christ) Council on Christian Unity Ecumenism General Assembly Reflections