How the Body of Christ Talks (C. Christopher Smith) -- A Review

HOW THE BODY OF CHRIST TALKS: Recovering the Practice of Conversation in the Church. By C. Christopher Smith. Grand Rapids: Brazos Press, 2019. 206 pages. 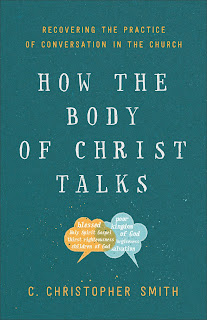 Communication is a word I hear a lot as a pastor. I often hear people say that we don't do a good job of communicating. Usually, that means people don't know what's going on in the church, despite the fact that church services begin with a time of announcements, people receive a monthly newsletter, the congregation has a Facebook page and a Facebook group, Twitter, a website, and then there’s simply the old fashioned method of word of mouth. Nevertheless, we still have a communication problem. There are books and resources that speak to this reality, but that's not what Chris Smith has in mind with his book How the Body of Christ Talks. He has a much deeper, relational, concern in mind. Learning to talk with each other might address the other concern, but he wants to take us deeper than that.

What Smith offers here is a prescription for "recovering the practice of conversation in the church." He roots this prescription theologically in the doctrine of the Trinity, more specifically a doctrine of the "social Trinity." For those of us who are attracted to the idea of the social Trinity, which emphasizes the relational nature of God's inner being (through perichoresis), this makes great sense. While I found his use of the doctrine compelling, there were a couple of occasions where I winced. This was especially true when Chris spoke of the three persons of the Trinity as three beings. That's not generally the way even social Trinitarians speak. It gives the appearance of tri-theism rather than Trinitarianism. That qualm aside, I believe that he is correct in rooting in the Trinity his vision of the body of Christ being a community that talks.

The book begins with a chapter that provides the theological foundations for the book. It is here that he lays out his Trinitarian theology of conversation. Even as there is conversation within God’s own nature, so the church is to reflect that conversation in its own life. As Chris notes, we have been created for conversation, but the powers of our time form us in such a way as to resist this conversation. Nevertheless, as he notes, “we need spaces within the common life of our church communities where we endeavor to relearn the arts of conversation by undertaking the discipline of intentionally talking together” (p. 25).

The remainder of the book is divided into three parts. Part 1 is titled "Setting Out on the Journey," and it has three chapters. The first chapter is focused on "learning the dynamics of conversation." These dynamics include group size, group homogeneity, and finally the "virtues and challenges of formal and informal conversations." Much of the book focuses on more formal conversations. That is, conversations that are intentional and regular, like the gatherings that have been taking place on Sunday evenings at his church for the past two decades. This chapter followed by one that explores topics of conversation. What are we going to talk about, especially early on? Here the key is building a foundation for ongoing conversations (at Englewood Christian Church, they developed a habit of weekly conversations using a time slot once designated for Sunday evening services). He suggests groups stay away from abstract conversations or jump into controversial topics at the early stages of formation. The point here is developing habits of conversation, and this takes time. It also requires setting ground rules (he offers possible ground rules in Appendix A). Finally, Part 1 closes with a chapter dealing with the "healing potential of conversational methods." Here the focus is on specific formats such as Appreciative Inquiry, that have been used successfully by groups, both sacred and secular. In essence, Part 1 is about practical issues. What do we need to do to build relationships that are conversational—especially in formal ways.

Part 2 focuses on spirituality. Smith has a chapter on conversation as a "prayerful way of being." There is a chapter on "abiding in the messiness of life." That is a helpful chapter because many of our important conversations occur in times of difficulty. The question is, how do we have fruitful conversations in these messy times? This messiness involves sin and human finitude. He writes "although we may take pains to avoid it, conversation will inevitably be messy; rather than trying to steer ourselves around that messiness, we would do better to learn to abide patiently in the midst of it." (p. 110). The final chapter in this section focuses on preparing ourselves for the conversations we engage in. This involves our hearts and our minds, as well as our bodies. When it comes to the body, he focuses on our eyes and ears, which need to be attentive. He also speaks of the need for rest if we are to successfully engage in conversation.

Part 3 focuses on sustaining the conversation. It is good to remember that Chris is writing this book after experiencing more than two decades of intentional conversation that has taken place in his urban congregation. To sustain this vision of conversation over the long term requires attention and work. It also involves cultivating a sense of mission and identity. Who are we as a congregation? What is our makeup? The point here is that we all have stories. Stories play an important role in this book. Chris returns time and again to the stories of his congregation—not to brag—but because these stories are illustrative of the vision he wants to share with us. Not only are our congregational and individual stories important, but the biblical story is foundational. Our stories are to be woven in with the biblical story. It also involves remembering the stories of God's work in history and our congregation's history. As a historian, I value heritage. We needn't be limited by it, but we need to recognize how the past forms us and prepares us for the present and future. The ninth chapter in the book is one we ought to have expected. How do you conversation in the midst of conflict? Some of us are a bit conflict-averse. We'd rather not get sucked into conflict, but conflicts happen. Sometimes they center on important issues, like sexuality and race, while at other times it’s theology. Conflict may be inevitable, but Chris seems to think that if we develop strong habits of conversation we can weather these conflicts more successfully. We can experience the healing of our fractures. In this chapter, he tells of an evangelical congregation struggling with the question of the full inclusion of LGBTQ folks. The congregation sits in the midst of a community with a significant LGBTQ population. The congregation wasn't of one mind about to respond. This was compounded by the congregation being part of a denomination that was less than welcoming. The question was what to do, especially since it appears that the denomination owned the building. Chris tells us some of the steps they took to stay together, though I'm not quite sure how it all worked out—especially relating to the denomination. The point is, having a strong foundation in conversation will ease the pain of conflict. It might not resolve everything, but it gives a better foundation. The final chapter in part 3, invites us to enmesh ourselves in the dance of community. Here Chris brings the Trinity back into play. The focus is on coordinating gifts and skills and passions so that the congregation can thrive.

In his conclusion, Smith focuses on the witness of a congregation that has embraced conversation. None of this is easy, but the practices seem to be beneficial. It's rooted in theology, and not just secular practices. We can learn from business and other group experiences, but for the church, this work will need to be rooted in theology.

Overall, I found this to be a most helpful book. It speaks to a concern most of us have in the church. We’ve seen our congregations struggle with fruitful conversations. What Chris offers here is not a quick fix. It's not five easy steps to creating meaningful conversation. While there are tools, like Appreciative Inquiry, that can be helpful, the first step is becoming intentional about the conversation. It's a bit scary to move beyond reading something like this and implementing it. Yet, that's the purpose. Of course, it requires a lot of buy-in on the part of the congregation. I should note that Chris has been speaking and writing about this topic for some time. He wrote an e-book some years ago (2012 to be exact) that covers similar ground, just not as in depth as here. That book is titled The Virtue of Dialogue: Conversation as a Hopeful Practice of Church Communities. If you found that earlier book helpful, you will find How the Body of Christ Talks even more so. May the conversations begin, as we live within the loving embrace of the Triune God.