Is This Heaven? No, It's Iowa 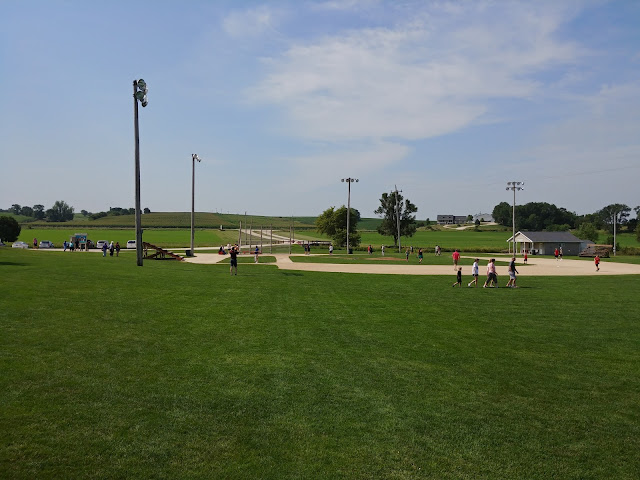 Perhaps you, like me, find watching the movie Field of Dreams to be a rather moving experience. Maybe it brings you to tears as it does me. Perhaps it's a Dad thing. I don't know. But there's something magical about the movie. I can now saw that there's something magical about the movie site as well, as I discovered last week when Cheryl and I visited the site. 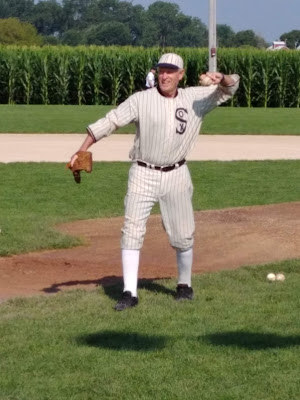 It was on our return trip from the Disciples of Christ General Assembly that Cheryl and I experienced the site. This site is located outside Dyersville, Iowa, not too far from Dubuque. It's a ways off the Interstate, so you have to want to get there. Being baseball fans and fans of the movie, we made the trip, arriving a little after 9 in the morning. When we arrived, a man dressed in a circa 1919 Chicago White Sox uniform (You know the team that featured Shoeless Joe Jackson), was pitching to anyone who wanted to pick up a bat (I was one who did so, but the pictures are still on Cheryl's phone).


After he finished pitching he began speaking to a group of people from a tour bus, plus any others who wished to listen. The person speaking was one of the cast members -- an extra who played one of the baseball players out on the field in the movie but without a speaking part. He told us about the filming of the movie, about interactions with the stars, and the history of the field and how it came to be a pilgrimage site of sorts.

I came to realize that had we come an hour later we would have missed the magic of that moment since the Ghost Player had to leave to umpire a local game. Nevertheless, it was powerful to swing a bat on the field of reams facing one of the Ghost Players. It was powerful to walk into the cornfield and listen for voices. I didn't hear voices but the rustle of the corn in the breeze does sort of speak to you. 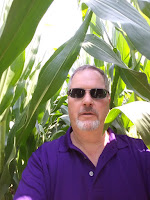 If you've seen the movie, you'll remember that scene near the end. I'm assuming this isn't a spoiler since the movie came out 30 years ago. At the heart of the movie is a sense of estrangement between father and son that is rooted in a difference of opinion about a player deemed criminal (Shoeless Joe) As the movie nears its conclusion, Ray Kinsella (Kevin Costner) sees a young man in catcher's gear. He recognizes this young man as his father. They have a conversation. John (the father) asks Ray:  "Is this heaven?" Ray answers, just as he had with Shoeless Shoe. "No this is Iowa." Then Ray asks his father: "Is there a heaven?" John answers: "Yes, it's where dreams come true." Ray answers: "then maybe this is heaven." Then comes the moment that brings tears to my eyes, Ray asks his long dead and unfortunately estranged father if they could play catch. For those of us who have or had difficult relationships with our fathers, this is a moment of reconciliation, which we may wish we could experience.

On a Thursday morning on a baseball field in Iowa, dreams came true. "Build it, and they will come!" 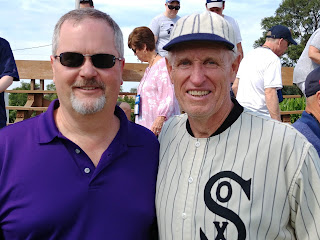