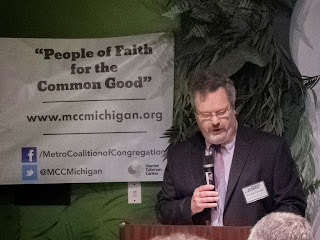 A colleague recently opened a conversation on Facebook about labels. He confessed his discomfort with the label Progressive Christian. He asked his Facebook audience if they had any suggested alternatives. You can only imagine the response. I thought about entering in, but your voice quickly gets lost in the mass of comments. So, I decided to write a blog post instead.

Both Phil and I are Disciples of Christ pastors. Both of us are left of center on the political and religious spectrum, though I imagine he is farther left than am I. I too am uncomfortable with the available labels, which tend to be more political than theological. The words liberal and conservative have lost their original meanings, and for many on the "left" liberal is old hat. So, progressive has been adopted. Here's the thing, the opposite of progressive isn't conservative, it's regressive. If we take the word seriously, then it's opposite becomes a pejorative. If you disagree with me, then you must be regressive. In other words, you must be a bad person.

Like I said, Phil and I (and many of the other respondents) are part of a tradition that eschewed labels. Unlike other denominations, we adopted names that are rather generic in nature. Christian, Church of Christ, Disciples of Christ. You can be a Methodist and a disciple of Christ, but can you be a Disciple of Christ and be a Methodist? Notice that I changed the capitalization on the second. Actually, it might be possible to have dual standing as a Disciple and a United Methodist, but that's not what I mean.

Here's the thing, labels have value and purpose, but they also carry baggage. One of the slogans of my tradition is "We're Christians only, but not the only Christians." I like that. In part, that statement reflects a sense that we are, as a tradition, part of a broader stream of Christians. We claim our identity as Christians, but we don't have a corner on the truth (that wasn't always true).

Labels can be helpful but problematic. I would think that many of us don't fit labels very well. So, in my politics, I'm pretty liberal (but judging from the current political landscape, not as liberal as some of my friends and colleagues). In my theology, I'm not a biblical literalist, but in many ways, I'm fairly "conservative" ---at least in comparison to some of my friends and colleagues.

In terms of my Christian identity: I'm part of a non-creedal community, and yet I have no problem reciting the creeds (at least the Apostles and Nicene. I'm not so sure about the Athanasian Creed). I'm Trinitarian, I believe in the resurrection and the divinity of Christ (and his full humanity as well -- that probably puts me into the Chalcedonian camp).  Part of me is Anglican in orientation (my son calls me a "high church Disciple"). I've come to accept my orientation as a Charismatic Christian, believing as I do in the gifts of the Spirit (see my book Unfettered Spirit). Although the word is badly damaged today, part of my journey is deeply rooted in the evangelical tradition (my graduate degrees, including my Ph.D., come from Fuller Seminary), which to me speaks both of a deep love of Scripture and a commitment to sharing the good news I've come to know in Jesus. I believe that faith and science are compatible. If there's a label that perhaps describes me, it's ecumenical, but interestingly enough I didn't see anyone in that discussion lift it up as a possibility. I'm thinking it may be too narrowly defined for some (due I think to the belief that it stops short of any interfaith engagement)? Or, ecumenical is either seen as old-fashioned or simply not understood.

So what should we do about labels?  They're helpful because they can serve as shorthand. If I say I'm progressive then you probably will discern that I'm pro-social justice. You probably think I'm not a biblical literalist. Then again, you may wonder why I seem rather orthodox in my theology (now there's a word worth exploring). I might accept labels like "postliberal," but I wasn't a liberal before I was post-liberal. I might accept the label "post-evangelical," but that's largely due to the way the word evangelical has come to be used. This is probably why Thomas and Alexander Campbell, along with Barton Stone, decided to keep their labels simple. I"m a Christian (even this label has been damaged in recent years). So, for now, I'm just a Christian, and as such I'm a disciple of Jesus Christ (notice the uncapitalized word disciple) who happens to be an ordained minister within the Christian Church (Disciples of Christ). In that form, I'm part of a larger community of people of faith committed to the common good of all creation.

JD Megason said…
You said it well Bob. I am an evangelical, probably to the right. I cringe at “social-justice” but believe in justice for all. The labels numb us to each other’s value. Blessings! JD
10:48 AM