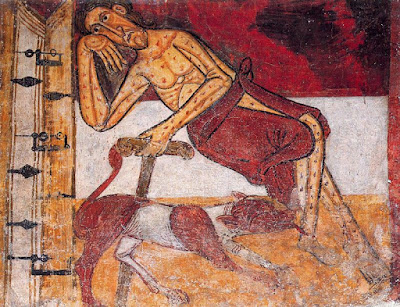 19 “There was a certain rich man who clothed himself in purple and fine linen, and who feasted luxuriously every day. 20 At his gate lay a certain poor man named Lazarus who was covered with sores. 21 Lazarus longed to eat the crumbs that fell from the rich man’s table. Instead, dogs would come and lick his sores.

22 “The poor man died and was carried by angels to Abraham’s side. The rich man also died and was buried. 23 While being tormented in the place of the dead, he looked up and saw Abraham at a distance with Lazarus at his side. 24 He shouted, ‘Father Abraham, have mercy on me. Send Lazarus to dip the tip of his finger in water and cool my tongue, because I’m suffering in this flame.’ 25 But Abraham said, ‘Child, remember that during your lifetime you received good things, whereas Lazarus received terrible things. Now Lazarus is being comforted and you are in great pain. 26 Moreover, a great crevasse has been fixed between us and you. Those who wish to cross over from here to you cannot. Neither can anyone cross from there to us.’

27 “The rich man said, ‘Then I beg you, Father, send Lazarus to my father’s house. 28 I have five brothers. He needs to warn them so that they don’t come to this place of agony.’ 29 Abraham replied, ‘They have Moses and the Prophets. They must listen to them.’ 30 The rich man said, ‘No, Father Abraham! But if someone from the dead goes to them, they will change their hearts and lives.’ 31 Abraham said, ‘If they don’t listen to Moses and the Prophets, then neither will they be persuaded if someone rises from the dead.’”


******
Yesterday the Bible Study I lead looked in at the Parable of the Rich Man and Lazarus. It's one of the more tricky parables because it raises questions of economics, justice, eschatology (afterlife and judgment). It also raises questions of accountability. At its core its the story of a reversal of fortunes, with two characters who live at the opposite ends of the spectrum. On one hand, you have the rich man who wears the finest clothes and eats the finest foods (daily). He doesn't seem to do anything but eat wearing expensive clothes. On the other hand, you have Lazarus, a man who is so poor he would love to eat the crumbs from the rich man's table. He's covered with sores, which are tended to not by the rich man, but by the neighborhood dogs (who probably do eat the crumbs from the table).
In the parable, both men die. Death is the great leveler. Wealth might be able to postpone death, but not prevent it. Perhaps its the overconsumption of food that finally does the rich man in. Nevertheless, both die but end up in opposite places. Lazarus is carried by angels and laid in the bosom (Greek: kolpos) of Abraham  There he gets to dine and rest in ways he never experienced in his earthly life. The rich man, on the other hand, has a nice funeral but ends up in Hades. For those of us with a universalist bent, this is not an easy parable to deal with. Surely the rich man, for all his faults, doesn't deserve such a fate? Or does he? That is the question. Lazarus had experienced hell on earth, but now the rich man experiences a literal "hell."

It is interesting that Lazarus, who is the only character named in one of Jesus' parables, really isn't the focus of the parable. This is not intended to glorify poverty. Instead, it focuses on obscene wealth and a lack of concern for one's neighbor. It's intriguing to contemplate the geography of this parable. In life, the two characters are situated in sight of each other. Surely the rich man saw Lazarus when he went in and out of his gate. After all, in the parable, the rich man knows his counterpart's name. And for Lazarus he would have seen the rich man come and go dressed in his fine purplish clothing. They knew each other in life. Now, in death, their again in close proximity, but as in life, there is a chasm separating them. The rich man can see Lazarus sitting there enjoying the protection of Father Abraham. We don't know what's going through the mind of Lazarus, but as for the Rich Man, Hades doesn't change him much. He still sees himself as Lazarus' superior. He asks, perhaps demands, that Lazarus bring him some water. Yes, he wants Lazarus to do something to alleviate his suffering that he was unwilling to do for Lazarus.  Scott Spencer notes in his commentary on the Gospel of Luke that the Rich Man suffers “from a destructive dearth of proper self-knowledge evidenced in a dismissive distortion of neighbor-knowledge and, ultimately, in a practical devaluation of Scripture-knowledge (16:27–31). For all his social prestige and economic prosperity, he is epistemologically and ethically destitute.” [Spencer, Luke, p. 414].

As the parable continues, the Rich Man never seems to get the point. He keeps asking that Lazarus serve his needs, whether it's providing water or visiting his brothers so that they might not suffer as he is. Abraham is unwilling or unable to respond. First of all, there is an uncrossable chasm between the two sides of the place of the dead. As for the visit from the dead, while it's possible (people did believe in the dead visiting), that wouldn't do much good. In other words, the brothers have what they need to stave off this judgment. All they have to do is listen to Moses (Torah) and the Prophets. If the Rich Man had paid attention to Scripture, he wouldn't have been in this position.

As I noted at the top, this parable raises important questions about how we live now and what the consequences might be. The characters are set at the extremes, but by doing this Jesus gets our attention. He wasn't saying anything out of character from his Jewish context. That seems to be the point. If we listen to the Law and the Prophets, we'll know how to live with each other. We'll understand the call to love our neighbor as we love ourselves. But, there is that question of accountability built into this that should give us pause. What say you?