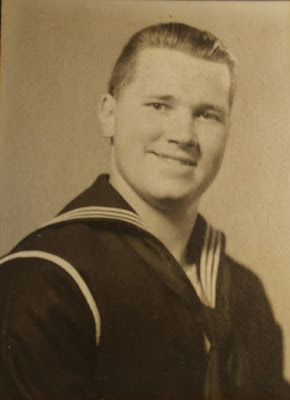 On May 8, 1945 (May 9, 1945, in the former Soviet Union) hostilities in Europe formally ceased. The War wasn't yet over, it would go on for several more months before Japan surrendered. However, Hitler was dead by this date and the Nazi government was ready to end the war. That War is on my mind because yesterday, I led a funeral service for one of those young men who served in that war. Those who served during the war and are still alive (there are over 200,000 of them living in the United States) are all well into their 90s.

I don't have any memories of the war because I wasn't born for another thirteen years. However, my father served in the Navy as a gunner on a merchant ship. My brother and I went through some of his "stuff" in October. We read his letters home and looked through the pictures and souvenirs from all the stops he made from Rio to the Philippines. My father died nearly twenty years ago, so he's not among those who stop to remember the end of the war. Like Jim, my father was discharged after the war was over.

As for my mother, she was still in high school when the war ended. However, her father, my grandfather, had an important role for the Navy at the Port of Embarkation in Wilmington (the military station where soldiers boarded ships to sail to the war zones). You can see the family picture below, with grandfather in his Naval uniform. At one time, that uniform hung in our closet and as a child, I would put it on, even though it was too big for me. You can see that he had the naval rank of Captain (the equivalent of a colonel). My mother's step-father, served in the Navy, rising to the rank of Lt. Commander.

The current pandemic makes public observances impossible. I'm not a pro-war kind of person, but I'm not a pacifist either. So, when it comes to war I'm a bit conflicted. At the same time, those who served, and during World War II, if you were healthy you served (with few exceptions), should not be forgotten.

So, in honor of the memories of my father, Jim Bird, and my grandfather, let us take time today to remember that day when the war in Europe came to an end, and with it the end of the Nazi effort to exterminate Jews, Gypsies, Gays, and others they deemed undesirable.

May we stop for a moment and remember them. 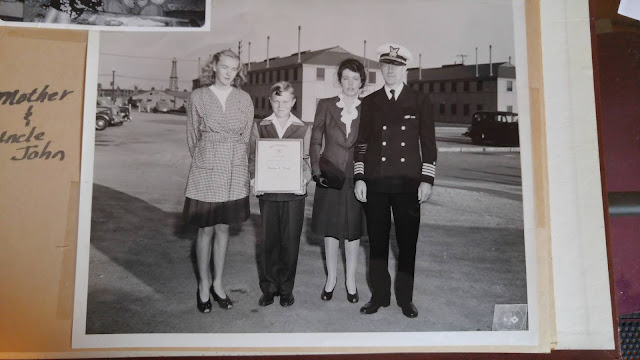