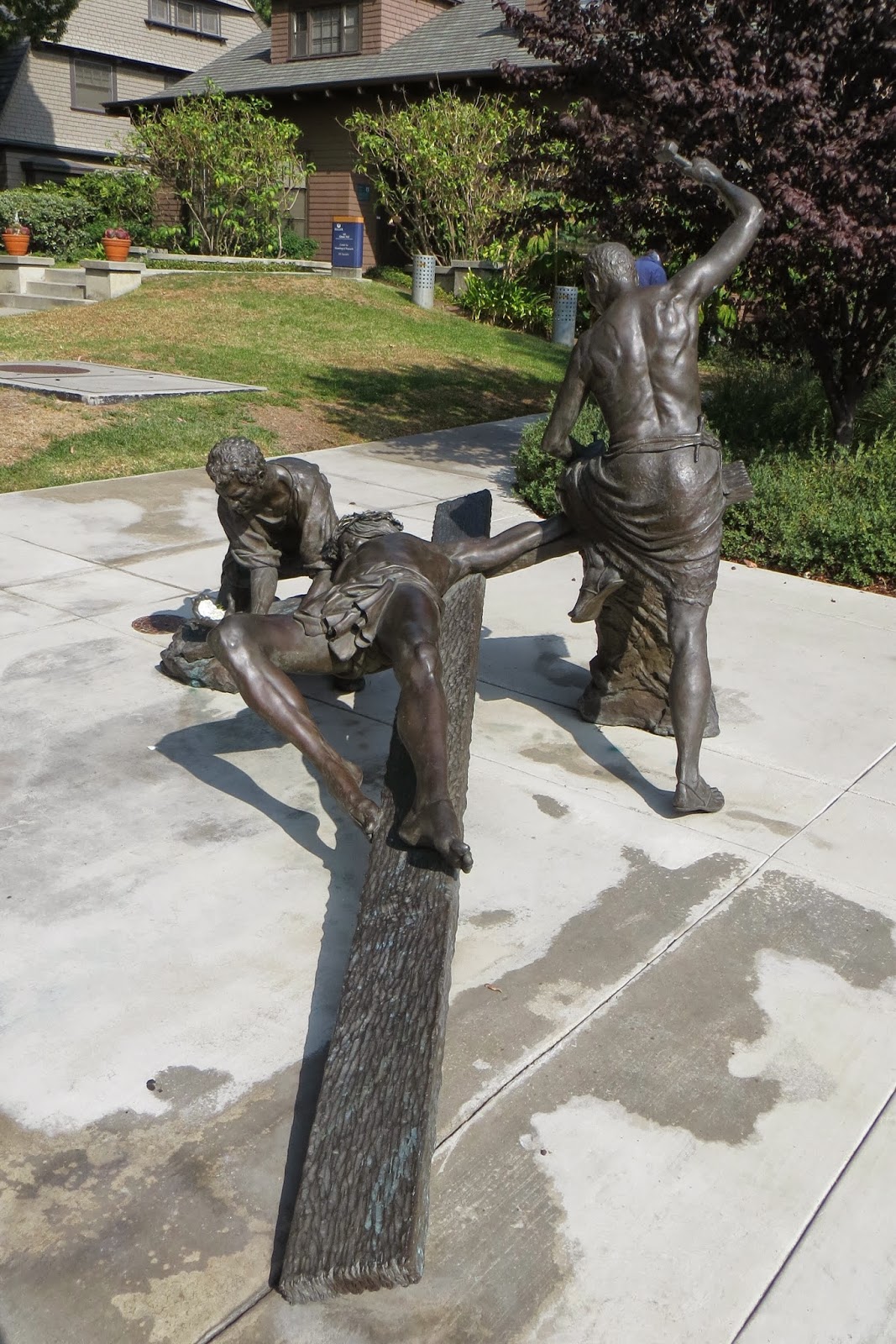 
From that time on, Jesus began to show his disciples that he must go to Jerusalem and undergo great suffering at the hands of the elders and chief priests and scribes, and be killed, and on the third day be raised. 22 And Peter took him aside and began to rebuke him, saying, “God forbid it, Lord! This must never happen to you.” 23 But he turned and said to Peter, “Get behind me, Satan! You are a stumbling block to me; for you are setting your mind not on divine things but on human things.”

Then Jesus told his disciples, “If any want to become my followers, let them deny themselves and take up their cross and follow me.25 For those who want to save their life will lose it, and those who lose their life for my sake will find it. 26 For what will it profit them if they gain the whole world but forfeit their life? Or what will they give in return for their life?28 Truly I tell you, there are some standing here who will not taste death before they see the Son of Man coming in his kingdom.”

Peter had just made the Good Confession.  He had declared Jesus to be the Messiah and the Son of the Living God.  In essence, he was saying:  “You’re the one we’ve been waiting for.”  You’re it; you’re our last hope.  I’ve heard something like that before.  I had just been called to serve as the pastor of a small, struggling congregation (not the one I currently serve).  I was told by one of the members– you’re our last hope.  I should have seen it coming – five years later we were still struggling (though we had as much money in the bank, if not more, than when I arrived) and a group in the church decided it was time to change pastors.  Since we were essentially in the same place as we were when I started there, perhaps there was still time to find another savior for the church.  Alas, that congregation is much smaller today than when I left, but it’s still alive.  Congregations are like that – they can hang on for years, clinging to life, while pastors come and go. As for Jesus’ contemporaries, they too had seen plenty of messiahs come and go.  These figures made promises, gathered followers, and subsequently ended up dead or dispersed, while their vision of hope perished with them.

Think for a moment about the meaning of Jesus’ pronouncements against the Temple.  When Jesus spoke against it he wasn’t complaining about the way in which the priests were organizing the worship services.  He was challenging the religiopolitical system of the day.  When he decided to go to Jerusalem, he wasn’t thinking that he would make a better offering than the usual sacrifices.  In going to Jerusalem and preaching the Gospel of the Kingdom, he was challenging the system that included both political and religious components.  The job of the priests, in the eyes of the Roman overlords, was keeping the peace.  Since the time of Constantine, the church has often kept the eyes of the people on the blessings of heaven, so they might forget that they have been exploited by those in power.

Now Peter wasn’t really happy with Jesus’ assessment of the future. If Jesus was the Messiah, and Peter was his right-hand man (he was the rock after all), then Peter did have hopes for a place of importance in the coming realm ().  This assessment must have been even more troubling when Jesus suggested that the same fate would befall his followers.  If you want to be my followers, then pick up the cross.  And if you pick up the cross, you’re probably going to end up on it.  To hinder it, apparently, is satanic.

Dietrich Bonhoeffer notes that Peter’s words of rebuke to Jesus show that “from its very beginning the church has taken offense at the suffering Christ.  It does not want that kind of Lord, and as Christ’s church it does not want to be forced to accept the law of suffering from its Lord.”  Not only that but “this is a way for Satan to enter the church. Satan is trying to pull the church away from the cross of its Lord” [ Discipleship (Dietrich Bonhoeffer Works, Vol. 4), 85].   We who are on the “progressive” side of the Christian spectrum may have trouble with the idea of Satan, but Bonhoeffer’s warning is important to hear.  There is always the temptation of complacency and self-satisfaction.  We can draw within ourselves, comfortable that we’re in good with Jesus even if the world continues to suffer.

What then is the nature of discipleship?  How costly is it? These questions came to mind the other day when I was attending a presentation on community organizing for religious folks – especially clergy  (note - meeting too place in August 2014).  Our presenter, the Rev. Dr. William Barber II, was talking about civil disobedience.  The question was posed -- what am I willing to be arrested for?  You see, I’ve been actively involved in community organizing efforts for years.   In this work, I’ve engaged the political forces, but I’ve played it pretty safe.  I’ve not engaged in real civil disobedience.  I’ve not joined Jesus in turning over the tables in the Temples or the Capitol buildings.  I’ve gone to Lansing for rallies, and our organization has sent folks to Lansing to pray in the Capitol rotunda, but no one has gotten arrested (that I know of).   I have friends who have been arrested, but so far I’ve avoided that fate!  But, what am I willing to be arrested for?

As we contemplate that question, we have this word from Jesus who tells the disciples that if they want to save their lives, they have to lose them.  But, there is no value in gaining the world while forfeiting one’s life.  The issue here, it seems, is about the choices we make.  Are we willing to follow Jesus wherever he leads, even if that pathway leads to a cross?  Perhaps we have answered the question by domesticating it.  Jesus dies on the cross.  I’m forgiven.  All is good.  Now I can get on with my life!  As for Jesus, he’s already made his choice.  The question is – how will Peter choose?  The story continues, with the promise of the kingdom always present.  Some of those standing in the midst of Jesus “will not taste death before they see the Son of Man coming in his kingdom” (vs. 28).  When was that?  Could it be the resurrection?  If so, are we living in the midst of the kingdom?  Perhaps not in its fullness, but possibly it is making itself felt already.
Email Post
Labels: Civil Disobedience Constantinianism Cross Dietrich Bonhoeffer discipleship Gospel of Matthew Kingdom of God Lectionary Peter Reflections William Barber