Jesus’ Conversion -- A Lectionary Reflection for Pentecost 11A (Matthew 15) 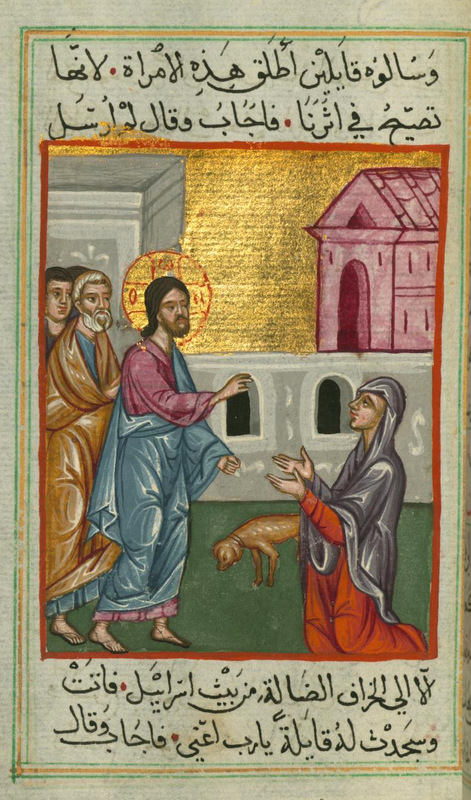 21 Jesus left that place and went away to the district of Tyre and Sidon. 22 Just then a Canaanite woman from that region came out and started shouting, “Have mercy on me, Lord, Son of David; my daughter is tormented by a demon.” 23 But he did not answer her at all. And his disciples came and urged him, saying, “Send her away, for she keeps shouting after us.” 24 He answered, “I was sent only to the lost sheep of the house of Israel.” 25 But she came and knelt before him, saying, “Lord, help me.” 26 He answered, “It is not fair to take the children’s food and throw it to the dogs.” 27 She said, “Yes, Lord, yet even the dogs eat the crumbs that fall from their masters’ table.” 28 Then Jesus answered her, “Woman, great is your faith! Let it be done for you as you wish.” And her daughter was healed instantly.

Ethnocentrism and religious exclusivism are symptomatic of the human condition.  Take American Exceptionalism as an example.  If the President of the United States doesn’t declare America to be the greatest nation in the world, he (or eventually she) will be roundly criticized.  Charges of being un-American might be lodged.  Consider the flap over then-Senator Obama’s lack of an American flag pin on his suit lapel during his presidential campaign.  What is true of Americans is true of other nations and ethnicities as well.  But surely Jesus rose above such human tendencies?  Surely his vision of humanity was open to all people – and as we like to say in my circles, “all means all.”

Today’s lectionary reading from Matthew 15 brings to our attention Jesus’ encounter with the Cyro-Phoenician woman.  Being on vacation today, I didn’t have the opportunity to preach this text, one that has long been an enigmatic passage, but it is worth reflecting on – especially in this time when religious and ethnic tensions are high – in Israel/Palestine, Syria, Iraq, and even here in the United States – as the situation in Ferguson, Missouri stands as a reminder.

Interpreters have found all manner of ways of explaining away Jesus’ apparent ethnocentric response to the cries of a woman in need.  But here we have this Canaanite woman asking for compassion and mercy for her demon-possessed daughter.  We can understand the response of the disciples who find her cries for help to be an annoyance and ask Jesus to send her away.

Jesus does engage her as we might expect, but the word he utters are clearly offensive.  He speaks of this woman and her daughter as dogs.  Now in our society dogs have become members of the family – almost human.  Such was not the case here.  Dogs had their value, but they often ran wild and were pests.

So, what do we make of Jesus’ response?  Was he testing her with his ethnocentric remark?  Or was he expressing his own belief about her?

I will admit, I believe that he was expressing his own perspective about her and her people.  But she has a response that is powerful.  When Jesus says that he is only sent to the house of Israel and that it is inappropriate for the children of God’s food to be thrown to the dogs, she reminds Jesus that even the dogs get to taste the crumbs from the master’s table.

Jesus responds – “great is your faith.”  What she asks, he does, for the daughter is instantly healed.   Is Jesus’ response not a conversion?  Has he not had his eyes opened by this woman?

What about us?  How open are our hearts and minds to those outside our circle?  Are we willing to open the doors wide and welcome the stranger, the one who is different into our midst?  In other words, are we willing to be converted?