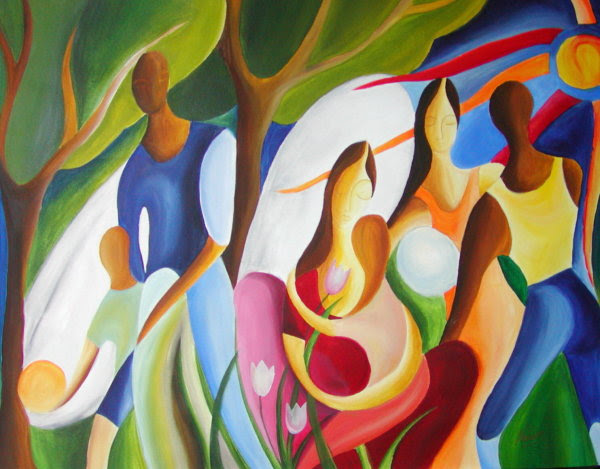 20 “I’m not praying only for them but also for those who believe in me because of their word. 21 I pray they will be one, Father, just as you are in me and I am in you. I pray that they also will be in us, so that the world will believe that you sent me. 22 I’ve given them the glory that you gave me so that they can be one just as we are one. 23 I’m in them and you are in me so that they will be made perfectly one. Then the world will know that you sent me and that you have loved them just as you loved me.

24 “Father, I want those you gave me to be with me where I am. Then they can see my glory, which you gave me because you loved me before the creation of the world.

25 “Righteous Father, even the world didn’t know you, but I’ve known you, and these believers know that you sent me. 26 I’ve made your name known to them and will continue to make it known so that your love for me will be in them, and I myself will be in them.”  (John 17:20-26 Common English Bible)

I'm not preaching today (I'm on vacation), but I do want to share a passage of scripture for the day.  It's Mother's Day, which isn't a religious event, but mothers are worthy of honor -- we've all had one.  But it's also the Seventh Sunday of Easter (and for many it's Ascension Sunday).  The gospel reading for today comes from the Gospel of John.  Jesus has finished supper with the disciples.  He's washed their feet.  He's given them final instructions.  Now he prays (John 17:1 reads: "When Jesus finished saying these things, he looked up to heaven and said, 'Father, the time has come. Glorify your Son, so that the Son can glorify you'.").

In the text for the day, Jesus prays that those who are his disciples and those who believe as a result of their testimony would be one -- just as Jesus and the Father are one."  For those of us who have a passion for unity among Christians this has been a key passage of Scripture.   In this prayer Jesus speaks of unity being the foundation of the witness of the disciples -- let them be one so that the world might believe.

The Christian community has always struggled with this prayer -- not that we don't agree with it, we just struggle with its implementation.  We know from our readings of the Johannine literature that writer of this gospel was concerned about the threat of disunity.  Paul shares his concerns.  One writer after another down through the ages has complained of our lack of unity.  But how do we attain to this unity that Jesus prayed for?  Constantine and Theodosius sought to give state backing to efforts to reign in disunity (for political reasons).  The Roman Church has always held up the Pope as the symbol of the unity that Jesus prayed for.  Agreement with the Pope, who represents Christ on earth, is supposed to unify the church (though the extent to which this is true you be the judge).  After the Reformation in England Parliament passed the Act of Uniformity, first in 1549 and then again in 1552 (Edward VI), again in 1559 at at the behest of Queen Elizabeth I , and then once more in 1662 at the Restoration of the Stuart rule.  These Parliamentary Acts decreed that all licit worship should be guided by the Book of Common Prayer (in its various forms).  None of these efforts, despite the threat of coercion, have led to unity.

If this unity that Jesus prays for is to be secured, and I for one pray for it, it won't come with coercion.  It won't be expressed through uniformity.  Instead, it will come as we learn to love one another, recognizing in each other of the presence of this same Christ who offers the prayer.  That which binds us is the love of God in Christ.