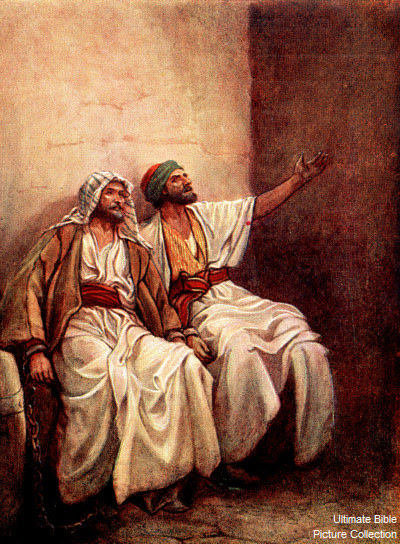 The lectionary reading for the 6th Sunday of Easter takes us to Philippi, where Paul and his companions meet a Gentile God-worshiper named Lydia.  The Spirit enables her to receive Paul's message and she accepts baptism.  But, Lydia isn’t the only woman in Philippi whose life is impacted by Paul’s ministry.

Luke’s narrative takes Paul and Silas down the streets of Philippi to the place of prayer, and on the way they encounter
a slave girl with a spirit of divination.  This girl was, we’re told, possessed by the spirit of the python or pythian spirit, which was related to the Delphic oracles under the control of the god Apollo.  Such a spirit, which exhibited itself in ecstatic utterances, was highly regarded in Greek society.  Charlatans, including this woman's masters, often took advantage of this gift for profit.   We’re told that this woman's "gift" brought her masters a great deal of money.

As they walked by, the spirit in the woman recognized them and cried out that they were  "slaves of the Most High God, who proclaim to you a way of salvation."  Like the demon possessed people who cried out and revealed Jesus’ identity (Luke 4:40-41), it is the demon possessed who proclaim the gospel in this setting, declaring that Paul and Silas bring with them the way of salvation.   These outbursts occurred over a period of several days, and finally Paul, having grown annoyed at her “heckling” turned to the spirit that controlled her and commanded it to leave the woman, which it did (vs. 18).  In doing so, they demonstrated the power of their God, over that of the spirit and its sponsor.

As one might expect, the woman's masters did not take kindly to Paul's act of exorcizing the woman’s spirit.  Although the woman was free from its possession, her owners lost a valuable commodity, one that had made them rich.  Seeing that the woman could no longer prophesy for them, the owners sought to have Paul and Silas punished.  This story demonstrates that the spiritual and the economic often intersect.  This wasn’t just a spiritual battle, it was an economic one, which the owners didn’t appreciate.

The owners had the two missionaries dragged into the agora  or marketplace, and placed them before the magistrates (Roman praetors) charging them with being Jews who taught customs unlawful to Romans.  The men got the crowd riled up, and incited them to violence.  The magistrates gave permission for the crowd to beat Paul and Silas with rods, something they did eagerly.  After the beatings the magistrates threw the two men into a cell.  All this occurred without a trial.  It would appear that this scene resulted from a combination of things – religious differences, economics, and an anti-Jewish sentiment that seemed to lay just under the surface of Gentile society.

The magistrates charged the jailer with keeping the men securely locked in the jail.  Following his orders closely, the jailer put Paul and Silas, bleeding from their wounds, in the innermost cell and put their legs in stocks.  Despite the ruthless nature of this beating, we find Paul and Silas, locked in a cell, bleeding from a severe beating, singing and praising God in their cell at midnight.  Their calm and their worshipful purpose represent a scene for Luke of cosmic battle.  Robert Wall and Tony Robinson write:

In Acts prisons symbolize the location where a cosmic battle between God and evil (or Zeus) is waged.  What Paul and Silas are doing there, as God’s agents, exemplifies God’s triumphant response to evil: they are “praying and singing hymns to God” (v. 25).  Their acts of devotion are resurrection practices.  The other prisoners listen to their witness, and what those prisoners hear interprets the earthquake as God’s answer. [Robert W. Wall and Anthony B. Robinson, Called to be Church, (Eerdmans, 2006), p. 197.]

While they were singing and praising God, an earthquake struck, and with it the cells were opened and the shackles fell off.  Everyone in the jail was free to leave, but as we see, they didn’t.  The jailer, awakened by the quake and expecting to find the jail empty of its contents, drew his sword to kill himself.  Why, we’re not sure.  Most likely he knew he would be held responsible for the escape, and thus the honorable thing to do was kill himself.  It would lend some dignity to his death.

Paul and Silas, realizing what the man was about to do, told him to stop since they were still there.  They never left, even though they could have easily escaped.  The jailer, shocked by the decision not to escape, fell down before them, and asked what he had to do to be saved.  This request parallels earlier requests – at Pentecost, in Samaria, the eunuch.   The person is confronted by something powerful and knows that they must respond.  What they mean by being saved may differ from person to person.  What is important to note that in this case the person is not Jewish nor is he a God-fearer.  He would not have had the same kind of background understanding that Lydia or Cornelius might have.  But, he knew something powerful had happened and he sought solace in it.

Having heard the message of Christ explained to him, the jailer took the two prisoners to his own house, where he tended to their wounds.  After washing the wounds of the two men, the jailer and his household submitted to baptism, as Luke says, "without delay."  The great fifth century preacher, John Chrysostom commented on this situation:

He washed and was washed; he washed them from their stripes, and he himself was washed from his sins.  [John Chrysostom, Homily 36:2 quoted in F.F. Bruce, Acts, NICNT, (Eerdmans)338.]

Note that it was the entire household that was baptized.  The decision of the head of the household would have been sufficient for all who dwelt in it.  Although in infant baptism traditions, parents still make hat decision, for those of us in a more baptistic tradition, we would leave it to the individual to make the decision.  But, it would be good for us to consider the implications of such a movement.

As we consider the stories of Paul's ministry in Philippi, especially his ministry with the family of the Philippian  jailer, we have confirmation of the words of Peter at the Jerusalem Council concerning the Gentile mission:

12 The entire assembly fell quiet as they listened to Barnabas and Paul describe all the signs and wonders God did among the Gentiles through their activity. 13 When Barnabas and Paul also fell silent, James responded, “Fellow believers, listen to me. 14 Simon reported how, in his kindness, God came to the Gentiles in the first place, to raise up from them a people of God. 15 The prophets’ words agree with this; as it is written,

16 After this I will return, and I will rebuild David’s fallen tent;  I will rebuild what has been torn down. I will restore it  even all the Gentiles who belong to me. The Lord says this, the one who does these things[a]18

19 “Therefore, I conclude that we shouldn’t create problems for Gentiles who turn to God. 20 Instead, we should write a letter, telling them to avoid the pollution associated with idols, sexual immorality, eating meat from strangled animals, and consuming blood. 21 After all, Moses has been proclaimed in every city for a long time, and is read aloud every Sabbath in every synagogue.”  (Acts 15:12-21).

Here is the evidence, that the message of Jesus had found its home among the Gentiles.