Refreshed With Praise -- Sermon for Christmas 1B 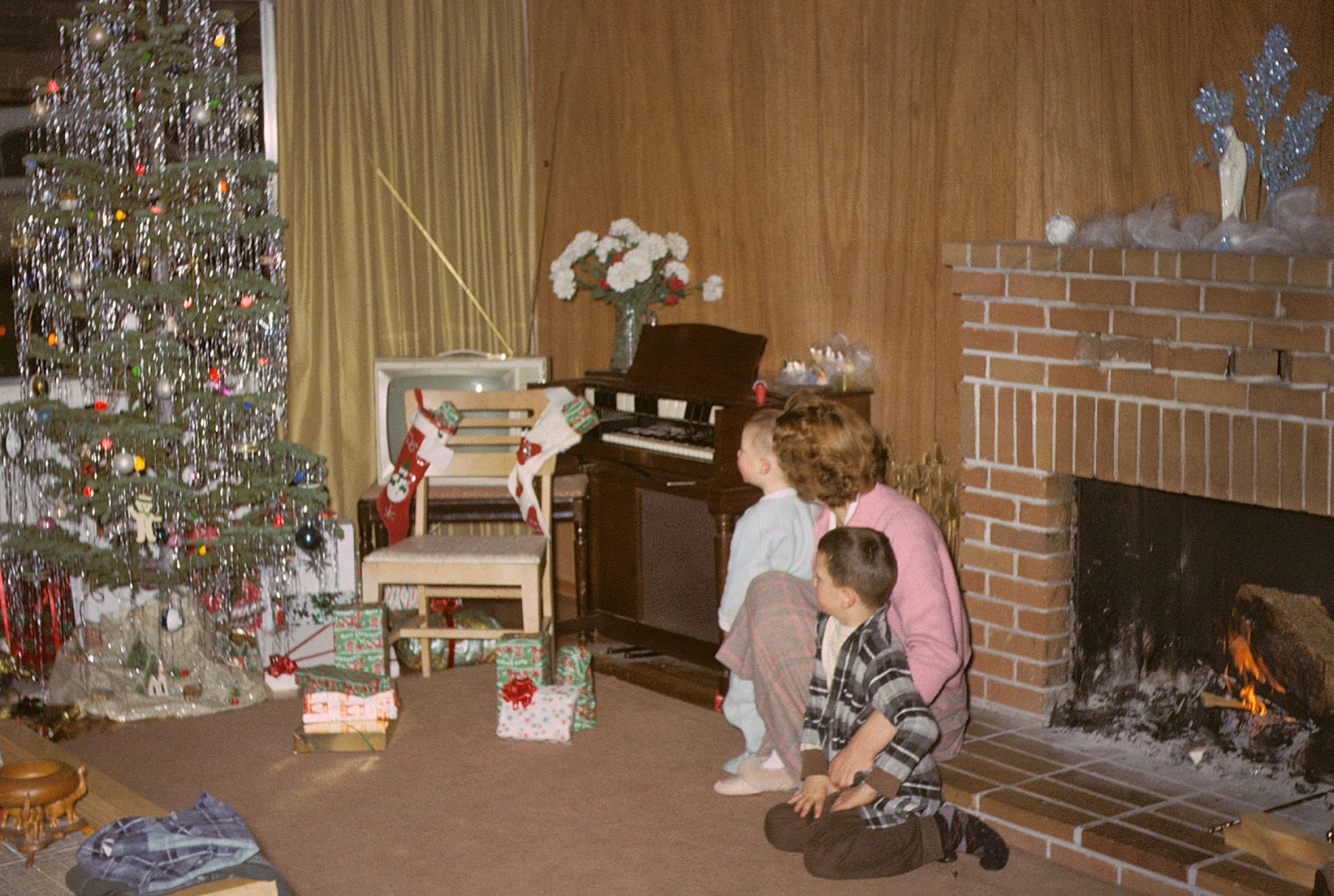 Just a few days ago many of us opened presents that were laid out under a tree or perhaps hanging in a stocking.  So, here’s my question – when you were opening gifts did you show proper gratitude?  Were you exuberant in your declarations or did you mumble a word of thanks, even as you were thinking – “I'm not sure what to do with this sweater? There is a reason why it’s easier to give a gift card than pick out a gift.  Even if you have a list, you could come home with the wrong thing, and that doesn’t lead to much happiness on the part of the recipient!

Parents often require their children to say thank you for gifts received.  Call Grandma, we tell them, and tell her how much you love that sweater she knitted for you.  You know, the sweater you wouldn’t be caught dead wearing outside your bedroom.  But whether you liked the gift or not you have to muster enough enthusiasm to thank the giver.

Saying thanks for gifts seems to be something of a lost art in recent years.  Maybe that’s because we don’t send as many cards and letters as before.  But gift givers do enjoy receiving a word of thanks – especially if they’ve gone to some trouble in picking out just the right gift.  It could be an email or a Facebook message or even a text – but some word of thanks is greatly appreciated.

Sharing words of thanks, especially with enthusiasm, is a learned behavior. Stephen Farris speaks of the importance of teaching children gratitude by requiring them to say thank-you:

“If they say the words, the words become habit, and in the soil of the habit, the seed of gratitude may grow” [Feasting on the Word: Preaching the Revised Common Lectionary, Year B, Vol. 1, p. 157].

Psalm 148 is an invitation to offer praise to God – just like the other four Psalms that close out the Book of Psalms.  Each of these five Psalms begins with the words “Praise the Lord!”  In this Psalm, the singer paints a picture of the cosmos joining in singing a song of praise to God.  After all, it is God who created the Cosmos.

The Psalmist begins with the big picture but then begins to zoom in to the earth itself, where we find the creatures of the earth and even the inanimate elements of creation – from sea monsters to the mountains, all of the creation sings praise to God.  Finally the Psalmist draws in closer to listen to the voices of the people of the earth.  Yes kings and people sing the praises of God.  Young and old, male and female, all are invited to share in songs of thanksgiving to the one who has delivered us so we might share in the bounty that is God’s provision.

Stephen Farris, whom I quoted earlier, suggests that there are three words that ultimately sum up this song.  They are – comprehensive, exuberance, and wonder.  It is comprehensive because all of the Creation participates.  It is exuberant because there is joy that is released by God’s Spirit into our lives.  When we embrace the fullness of God’s gifts, including the very creation of the cosmos, we must stand in awe, taking in all that God has created.  It might be the stars at night – if you get far enough away from civilization to truly see the vast expanse of space.  It might be a natural wonder – Crater Lake, the Grand Canyon – or one made with human hands but with divinely provided gifts – St. Paul’s Cathedral or the Hagia Sophia.  Or perhaps it’s a new born baby.  Whatever it is, it engenders wonder.

As we come to share in worship on this first Sunday after Christmas, is there exuberance and wonder in your songs of praise?  Are you ready to give thanks to God for the child born in Bethlehem and the gifts that come to us in and through this child?

In the Gospel of Luke, Mary and Joseph take their child to the Temple to perform the rite of purification and dedicate their child to God, as was required by the Law.  As they leave the Temple, having offered their sacrifices, they are met by two older people – first a man named Simeon and then a woman named Anna.  Both are known for their holiness and their devotion to God.

Simeon had devoted his life to seeking the salvation of Israel, and as Luke records the “Holy Spirit rested on him.”  In other words, he was a prophet of God.  Luke tells us that Simeon had a vision that he wouldn’t die until he had seen the Messiah.  So, guided by the Spirit, Simeon approaches this family, and he takes the child and he “praised God.”  I expect there was both exuberance and wonder in his voice.  He had been looking forward to this day his entire life.  This is what he lived for.  He was like a Cubs fan looking forward with undying hopefulness that he would live long enough to see the Cubs win a World Series.

With a voice filled with joy, He offers a word of thanksgiving to God.  These words form the third Canticle or Hymn in the Gospel of Luke, known in the Latin as the Nunc Dimittis.

Master, now you are dismissing your servant in peace,
according to your word;
for my eyes have seen your salvation,
Which you prepared in the presence of all peoples,
a light for revelation to the Gentiles
and for glory to your people Israel.  (Luke 2:29-32)


The words of Simeon are words of praise and thanksgiving, but they are also words of expectation.  This small child that he was holding would become the means of salvation for the cosmos – he would be the light to the Gentiles and the glory of Israel.  Yes, the mission of this child would be comprehensive.

After Simeon bids the Holy Family goodbye, with a word of encouragement but also warning, the Holy Family is met by Anna.  Like Simeon, she is also a prophet.  Luke tells us that she had been married early in life, but after seven years of marriage, still a young woman, she was left a widow.  Now aged eighty-four, she had spent the remaining years of her life living in the Temple precincts, where she worshiped God by fasting and praying, day and night.  When Anna saw this Family, who were filled with their own sense of wonder at Simeon’s message, she approached them and began to sing out in praise to God.

According to Luke as soon as she discovered the presence of this child, she began to “praise God and to speak about the child to all who were looking for the redemption of Jerusalem.”  (Luke 2:38).  Anna wasn’t only a prophet, she was an evangelist.  So filled with joy at seeing this child who would redeem Jerusalem, she couldn’t help but tell everyone she met that she had found the one they were looking for.

Simeon and Anna join in praise of God, because God’s name alone is to be exalted.  They had spent enough time dwelling in the presence of God that they could see God’s glory shining through this child who would light the pathway for our redemption.

As we join together in giving praise to God this day, joining with the heavenly chorus, we experience refreshment.   Even if we don’t always “feel it” at the moment, by coming with frequency to share in the worship of God, we can develop the habits necessary so that the seeds of gratitude can be planted in the soil of our souls.  Patricia Wilson-Kastner writes that “liturgy is a drama of the development of our communion in God and also a pattern of how we are called to live and act in God. [Praising God: The Trinity in Christian Worship, p. 120.]

Having witnessed the drama of the incarnation, with Simeon and Anna, we come this day to share in the praise of God, our Creator, our Redeemer, and the Sustainer of our very being.  Thanks be to God!!

Udy Regan said…
I have been to a storage in Claremont before and heard a few stories regarding this hot debate topic from fellow residents around the vicinity. I guess the discussion seems endless perhaps until the end of time. What we can simply practice is to exercise tolerance and acceptance of our difference with one another. That is the only way that we will gradually learn that no individual is and will ever be the same, thus receiving one another is a good start.
11:13 PM