Salvation and the Divine Nature 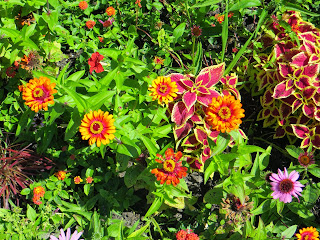 During Easteritide I have been engaged in sermon series focusing on how we might understand salvation. For many people salvation is defined in terms of penal substitutionary atonement. That is, we break divine law (sin), receive divine judgment (death penalty). In response Jesus comes to earth and suffers the penalty (cross). We get to heaven if we accept the payment Jesus has made for the debt we owed but could not pay. This substitutionary form of atonement is present in our hymnody and our prayers (especially prayers at the table). It is the most common understanding of salvation in Protestant churches, but is it the only option? I would say no, and I've been exploring these various understandings in my sermons. I should add that in many ways none of these concepts by themselves offer a full understanding of salvation. Rather, to get a full picture of salvation we need to allow for a variety of nuances to be present.

This week I want to introduce the idea of theosis, which is prominent within the Eastern Churches. One of the primary texts is 2 Peter 1:3-11, which speaks of becoming "participants of the divine nature." For Eastern Christians when it comes to sin and salvation, the emphasis has been less on the legal element or guilt, and more on the idea that the image of God, our god-likness, has been distorted and needs to be restored so that we might fulfill our purpose to be in union with God.  In the incarnation Jesus heals the distortion, and overcomes death by undergoing death himself and then defeating death in the resurrection. In Eastern Christianity the focus is not just on the cross but on the entirety of the incarnation, from birth to ascension.

Consider the words of Irenaeus of Lyons:

Since the Lord thus has redeemed us through His own blood, giving His soul for our souls, and His flesh for our flesh, and has also poured out the Spirit of the Father for the union and communion of God and man, imparting indeed God to men by means of the Spirit, and, on the other hand, attaching man to God by His own incarnation, and bestowing upon us at His coming immortality durably and truly, by means of communion with God,-all the doctrines of the heretics fall to ruin.

Through the work of the Spirit in the wake of the incarnation, God is imparted to humanity, and humanity is attached to God, so that we might take on immortality through our communion with God.

Later on Athanasius writes similarly and more simply: "He, indeed, did assume humanity that we might become God." (On the Incarnation, 54).

It would seem that for the Eastern Christians our destiny is to share in union with God. We may have gotten off track, and thus distorted the image of God, with which we were created, but in Christ God has fixed the distortion, allowing us to continue our progression toward full communion. In other words, we were created for full communion, but it's not something that we start off with, it is something we mature into. Unfortunately we have of our own devices strayed from that path, but the Word (Logos) became human to help us get back on the pathway.

There is much more to this than what I've shared, but I find it intriguing and perhaps offers us a way forward beyond the legalistic version so prevalent in Western Christianity.

Paul Fraser said…
This opens a window and lets light in for me. I have consistently felt disappointed by substitutionary atonement theories and needed to hear this enlightening process of understanding from the Eastern Church.
10:22 AM

Robert Cornwall said…
Paul, thank you for sharing this! I pray that exploring eastern understandings will bring blessings!
8:37 PM