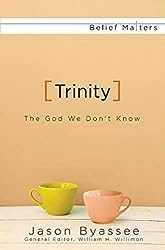 There are of course dissenting views, but it is safe to say that the vast majority of Christians around the world confess God as Trinity (One God in three persons).  Of course, you won’t find the word Trinity in the Bible, which is sufficient proof to some that it is an unbiblical idea, and best left aside. That said, most Trinitarians (myself among them) would respond that while the word is not there and a precise formula isn’t present, the foundations for what became the doctrine of the Trinity is present in the New Testament (not just Matthew 28:19-20). It probably would have been much simpler if the emerging church had not chosen to embrace Trinitarianism, but to do so made it more difficult to understand the place of Jesus in the conversation. Even Arius, who rejected Trinitarianism as an innovation, believed that even if Jesus wasn’t equal to God he was more than merely a human being.  Having wrestled with what to do with Jesus, the church began to recognize that the Holy Spirit had to be dealt with. Thus, over time, a fully formed doctrine of the Trinity emerged (even if it took nearly four centuries to accomplish.

Theologians have been haggling over the meaning of the Trinity for nearly two millennia. Many lay people confess God to be Trinity, but aren’t sure what to do with the doctrine. Complicating things today is the pressure to deal with the masculine language used by the church to describe/confess the Trinity.  Many attempts to either simplify the conversation or to address language concerns leave us something less than a robust Trinitarian doctrine. One could, of course, declare that since theology/creeds divide we are better off putting our focus on deeds not creeds. Why bother with the Trinity when there are more important matters to be dealt with?  Jason Byassee (along with series editor William Willimon) would beg to differ with this assessment.  As the title of the series suggests, “belief matters.” Willimon writes in this introduction to this contribution to a new series of books written with lay persons in mind, “we wouldn’t have needed to believe that God is triune, the Trinity, if we had not met God as Jesus Christ. What Jesus said and how Jesus acted forced us into trinitarian theology” (p. xiii).  The problem, as Byassee, notes is that many have bought the claim that “Trinitarian thought is recondite, obscure, unedifying nonsense” (p. xv).  Since the Trinity is a difficult concept to explain, let alone embrace, we would rather just say the words and move on.  That solution, however, is simply unacceptable to Byassee. In this brief book he sets about to rectify the situation.

Before we get to the contents of the book I should introduce the author. Jason Byassee will be well known to some readers of this review. He has been pastor of Boon United Methodist Church in Boone, NC for the past several years. Before that he was an editor at the Christian Century. He is a journalist and a theologian, holding a PhD in theology from Duke and written about Augustine and the Desert Fathers. He was recently named to a chair in homiletics and biblical hermeneutics at Vancouver School of Theology. He brings these experiences and training to the conversation, which began as a presentation on the Trinity to a congregational study group.

Any book that attempts to lay out a coherent doctrine of the Trinity faces significant challenges. Writing a book on the Trinity for lay people is even more challenging, but Byassee isn’t deterred. He’s convinced that the Trinity is one of the central doctrines of the Christian faith and requires our attention. He understands why many feel the doctrine is so complex it’s not worth keeping, but he’s convinced that a truly Christian theology will need to engage the Trinity. While theologians have debated the merits of various interpretations of the doctrine, he believes it is important for the conversation to also take place within the church among the laity. It is an important discussion because it affects the way we understand the person of Jesus. Is he simply human or is he divine? What of the Holy Spirit?

One of the pressing concerns for many today is the masculine nature of traditional Trinitarian formulas – Father, Son, and Holy Spirit. While he recognizes why many have discomfort, he is concerned that the proffered solutions lead to other problems—heresies such as modalism.

This is a book designed to help lay persons better understand a central belief of the Christian faith, but if the conversation is to take place then we must first of all recognize that “we don’t know the true God.” We know some things about God, but God in God’s self lies beyond our comprehension. As Augustine declared about God – if we claim to understand God, “it is not God!” (p. xviii).  Yet the Creeds declare God to be a Trinity of persons. For our spiritual benefit, Byassee believes we must seek to gain an understanding of the Trinity.

The book is composed of three chapters. Byassee begins with the question that stands at the heart of the Trinitarian debates: Is Jesus divine? The Trinity as a doctrine (a grammar) is designed to answer that question. Byassee notes that while the New Testament speaks of Jesus in ways that suggest divinity, a full-fledged doctrine took time to develop. Early theologians often spoke in binitarian terms, not bringing in the Holy Spirit. There is a clear subordinationism present in many of these early attempts, but in time theologians recognized that while there might be subordination in the moment of Jesus’ incarnation, in terms of his place in the Trinity there must be full equality lest they fall prey to other heresies.

From Jesus’ divinity we move to the Spirit, the “generous gift-giver.” Like many Western theologians Byassee finds Augustine’s description of the Holy Spirit as the love that is shared by Father and Son to be fruitful.  An interesting insight is that the Spirit is shy—that is the Spirit always points to the Son. We pray not to the Spirit but to the Father through the Son in the Spirit. The conversation about the Spirit leads us to miracles and science and whether God is bound by the rules of nature.
In the final chapter Byassee seeks to bring things together, speaking of the way in which one is three and three is one.  It’s not a math problem, but is a question of relations. The danger he sees in many modern formulations is that they are modalistic—Creator, Redeemer, Sustainer are activities not persons, and all three persons are involved in these activities. To make sense of this we need concepts like the doctrine of appropriations and mutual indwelling. Each member of the Trinity has specific duties, but these are also shared. The concept of mutual indwelling or perichoresis is useful here, so that we see them participating in something like a dance – moving in and out in a circle. While this is a popular understanding Byassee is concerned that it not go too far. One of his major concerns is that we don’t get locked into analogies that cause more problems than they solve—like the children’s sermon staple of water being liquid, gas, and ice. This sounds good, but it is also a modalistic understanding.

In the end Byassee is not sure that most of our current conversations about the Trinity get us very far. In the end he wants to stay with the traditional formulas. The creeds aren’t perfect, but they get the basic principles right. Like his mentor Stanley Hauerwas, he thinks the only way to fully understand things is to be immersed in the tradition. It is a matter of living the faith not trying to convince those outside the faith of a truth that will not make sense outside the tradition. The message ultimately is this – the doctrine of the Trinity tells the story (the narrative) of God’s saving activity that takes place through Christ and in the Holy Spirit. The Trinity is the concept/doctrine that holds together both creation and redemption.


So what should we make of this book. I don’t think everyone will be happy with it, but that’s not Byassee’s purpose. His decision to stay with the traditional formula, despite its masculine language may lead some to bypass the book. His rejection of social trinitarianism will not make others happy. I would have wished he had engaged more directly leading contemporary theologians, especially Catherine Mowry LaCugna, Jurgen Moltmann, and Elizabeth Johnson.  Brevity may be the reason why he doesn’t engage those who have offered differing perspectives in a way that gives their views a proper hearing, but I still wish he had been more willing to engage them. Thus, if one uses the book with a study group, and it is designed for that purpose with study/discussion questions provided, one should recognize that what one will encounter is a thoughtful but traditional presentation of the doctrine of the Trinity. Being that I’m a Trinitarian already, I resonate with his presentation (though I’m attracted to a social trinity). Whether others will be convinced, I cannot say. But, then that may not be the purpose here. It's not an apologetic book. It is a catechetical book.  In any case Jason brings together his complete background as pastor, journalist, and theologian to produce a readable presentation of the most difficult of theological subjects.
Email Post
Labels: Catechesis Creeds Divinity of Christ Holy Spirit Jason Byassee Reviews Salvation Theology Trinity