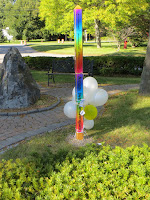 Yesterday was the fifteenth anniversary of the 9-11 attacks. I posted my sermon from the Sunday following, and you'll find other pieces I wrote, spoke, and preached in the aftermath of that day that has marked our existence since that time.  September 11 has been designated Patriot Day along with being the National Day of Service and Remembrance. On this day after Patriot Day, I feel inclined to reflect on what it means to me to be patriotic.

At times I feel ambivalent about patriotism. In part that is because too often we overly mix religion and national identity. Or more specifically, many Christians equate Christianity and American identity. The church is much larger than this nation. That's why I speak of the Lord's Prayer being the Christian pledge of allegiance in my book Ultimate Allegiance: The Subversive Nature of the Lord's Prayer. My allegiance to God stands above my allegiance to nation, but that doesn't mean I don't love and appreciate the nation in which I live. I am an American. I was born here and I've lived here all my life. To be patriotic doesn't mean one has to dismiss the value of other nations. God is the God of all peoples, and so God is present elsewhere.

My reflection on patriotism is stirred in part by the events of yesterday, but also a chapter in a book written by David Gushee. The book is A Letter to My Anxious Christian Friends, and the chapter is a reflection on patriotism. David speaks of being an Americans as part of his identity. It's not the only part, but it is an important part. With that I'm in agreement. He also notes this sense of American identity has led to a desire to serve the nation. Like me, he never served in the military, but he finds other ways to serve, and so do I. He writes here something that resonates with me. Hopefully it describes my own sense of call.

But I serve my country through what I am doing in this book and in most of my work -- namely, trying to contribute to healing, understanding, and justice in our civic culture and trying to help America's still-majority Christian population be the best version of ourselves in this anxious time. (Gushee, p. 48).

He notes that there are Christian voices that argue against any form of patriotism fearing that it would lead to an equation of Jesus with America. While he and I would oppose nationalism, which is a much stronger, often militaristic, version, and thus supporting a needed critique of the nation-state, the nation-state is reality. Finding that balance that provides necessary critique with appreciation for the nation that we inhabit is key. The form of patriotism that Gushee speaks of here is one that will be "critical, service-oriented, love-centered loyalty" (p. 50). I believe that is a good place to be, for it, as Gushee suggests, represents a call to love one's neighbor.

So, as Gushee concludes his reflection:

Yes, our country, including our political process, is deeply, maddeningly outrageously flawed. Therefore, precisely as followers of Christ, let's roll up our sleeves in exercising our citizenship responsibilities as faithfully as we can. (Gushee, p. 51).