Church Life -- A Lectionary Reflection for Easter 4A 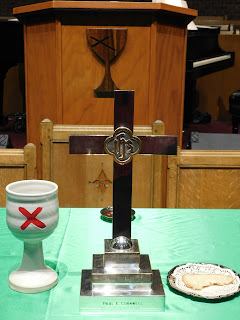 42 They devoted themselves to the apostles’ teaching and fellowship, to the breaking of bread and the prayers.

43 Awe came upon everyone, because many wonders and signs were being done by the apostles. 44 All who believed were together and had all things in common; 45 they would sell their possessions and goods and distribute the proceeds to all, as any had need. 46 Day by day, as they spent much time together in the temple, they broke bread at home and ate their food with glad and generous hearts, 47 praising God and having the goodwill of all the people. And day by day the Lord added to their number those who were being saved.

My son regularly asks me “what’s happening in church-land today?”  Indeed, what is happening? As we progress through this Easter Season, I am reflecting on the first reading from the lectionary, which is taken from the book of Acts. The reading for the Fourth Sunday of Easter in Year A continues the story of Pentecost and its aftermath. The questions raised by the readings from Acts focus on the formation of the church and its witness to the gospel. Having been filled with the Spirit at Pentecost, who is this congregation of follower of the risen Christ?  What is distinctive about them and their message?

In the reading just prior to this, Peter concludes his Pentecost sermon by inviting the crowd that had gathered after the outburst of the Spirit to repent and be baptized so that they could receive forgiveness and the gift of the Holy Spirit (Acts 2:38). According to Luke, 3000 were baptized that day. I’d like to think they were immersed, but I’m not sure about the logistics of this activity. That’s a lot of people to get baptized, even if they could commandeer a nearby pool of water. It’s also clear they weren’t catechized before their baptism. First baptize the converts and then instruct them later.

Having concluded the account of the Pentecost sermon, Luke offers us a brief summary of what this new church looked like. He mentions four acts that define life in this church. Apparently, they attended to the Apostles teaching and fellowship, along with the breaking of bread and prayers.  While we usually think of four different activities being mentioned, could there really be only two elements mentioned? Could teaching and fellowship be one element, and the breaking of bread and prayers be another? If so, then Luke would be thinking of this early church being first a community (koinonia) of teaching (didache)? That is, it’s quite possible that Luke is speaking of a community of learning, a community defined by discipleship that centered on the teachings of the Apostles. Secondly, this community might be marked by its commitment to gather at the Table as part of its common prayers. As Gordon Smith summarizes this possibility: “The devoted themselves, in essence, to two practices, both located within their fellowship and their common prayer, their worship” [Evangelical, Sacramental, & Pentecostal, p. 32]. That leads to the possibility that we are a community defined by Word and Sacrament. Out of these two practices, everything flows. As one who believes in the importance of frequent communion, if both Word and Table mark the life of the church, then at the very least, worship should be marked by weekly communion.

What flows from this Spirit-empowered community that gathers for Word and Table is quite powerful, or at least that’s what Luke suggests. He reports that “awe came upon everyone, because many signs and wonders were done by the Apostles.” Not only that, but the believers held everything in common and provided for everyone in need. What we see happening in this reading is the formation of a community centered in Word and Table, that will stand as a sign to the broader community that God is at work in their midst. Willie Jennings catches the power of this moment, writing:

The space of this common was where life stories, life projects, plans, and purposes were being intercepted by a new orientation. This common is created by the Spirit. How could the things they held dear not be drawn toward the common, this new gathering, this ekklēsia? Time, talent, and treasures, the trinity of possessions we know so well, would feel the pull of this holy vortex. [Acts: Belief, p. 39].

Whether this vision was practical or could be implemented then or now is not the point. The point is, as Jennings puts it, “what must it have felt to feel the powerful pull of the life of our savior, and what energy did it take to resist the Holy Spirit, to slow down this pull enough to withhold themselves and their possessions from divine desire” [Acts, p. 39]. Jennings notes that the issue here is not whether God needs their possessions (God is not impressed by our offerings), but rather God’s desire to draw the people into oneness of purpose, as the Spirit directs and Jesus’ ministry demands.

Thus anything they had that might be used to bring people into sight and sound of the incarnate life, anything they had that might be used to draw people to life together and life itself and away from death and end the reign of poverty, hunger, and despair—such things were subject to being given to God. The giving is for the sole purpose of announcing the reign of the Father's love through the Son in the bonds of communion together with the Spirit. [Jennings, Acts, pp. 39-40].

In other words, all of this is meant to announce the reign of God. If that is true, then as we consider the church today, in what ways do we feel the pull of the Spirit into a community that gives evidence of the reign of God?

As result of gathering together as a community of learning and Table-centered worship, a community emerged that gathered daily in the Temple for worship and in homes to break bread. Therefore, we’re told that the they “ate their food with glad and generous hearts, praising God and having the goodwill of all the people.” We don’t know if this experiment in common life was long lasting or practiced elsewhere. But even if this was an idealized vision of the earliest moments of the church’s life, it does offer us a vision of what could be. The further result of this wind of the Spirit moving through this community was that on a daily basis the “Lord added to their number those who were being saved.” They didn’t use marketing schemes. They didn’t get buses to round up the children. They didn’t look to Starbucks for guidance. They simply drew close to the risen Christ through the Spirit and gave evidence that the realm of God was present amongst them. The question then becomes, what about us?

How is the Spirit moving in our midst? Do you sense that there is value in creating a robust ecclesiology, which understands that it is God who builds the church not us? By saying this, I don't mean that we have no role in it,because it's clear that we do. However, it doesn't appear that having "attractive programming" but Spirit empowered community that is in view here. So, whatever growth is experienced seems to be due to God's engagement. The result was something that brought awe to the neighborhood. So, what is awe-inspiring about the Christian life today?

John said…
It needs to be noted that the descriptions of the early followers show each and everyone of them immersed in communion with each other and with the surrounding world. The New Testament makes no note of followers who do not follow 'in community' with other followers. "Gathering" is central to a life of Christian faith. "Where two or more are gathered...."
7:37 AM