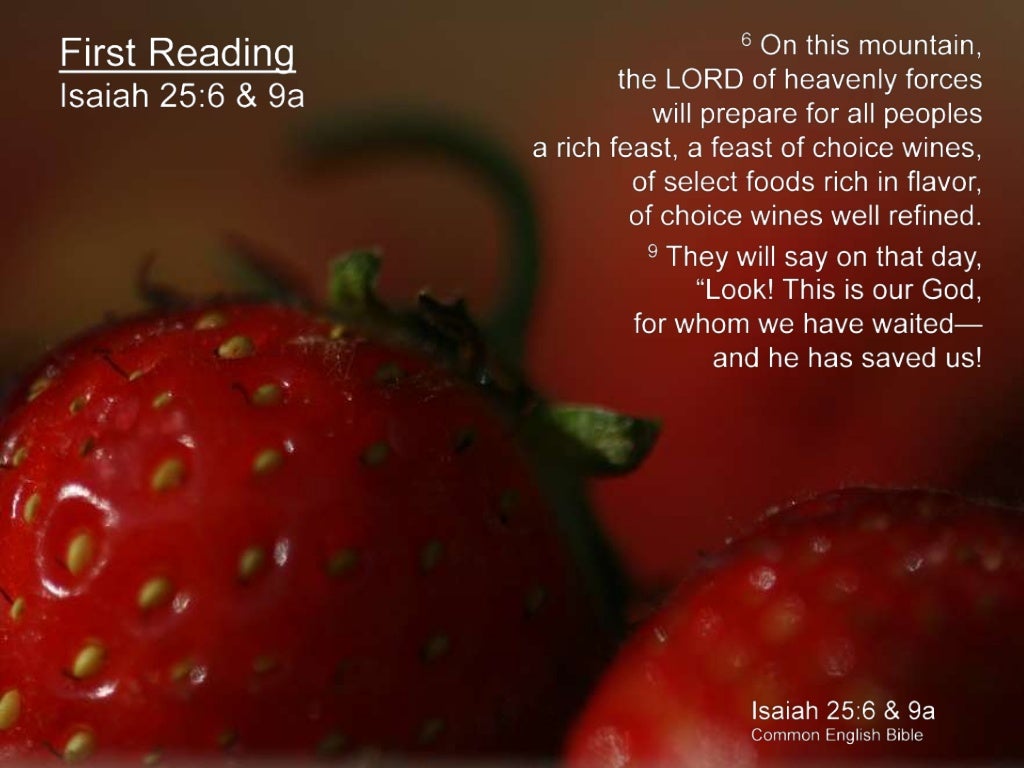 6 On this mountain the Lord of hosts will make for all peoples     a feast of rich food, a feast of well-aged wines,     of rich food filled with marrow, of well-aged wines strained clear.7 And he will destroy on this mountain     the shroud that is cast over all peoples,     the sheet that is spread over all nations;8     he will swallow up death forever. Then the Lord God will wipe away the tears from all faces,     and the disgrace of his people he will take away from all the earth,     for the Lord has spoken.9 It will be said on that day,     Lo, this is our God; we have waited for him, so that he might save us.     This is the Lord for whom we have waited;     let us be glad and rejoice in his salvation.

Easter celebrates the victory of life over death. We gather on Easter morning to declare in song and prayer: “Christ the Lord is Risen today.” We joyfully sing: “The strife is o’er, the battle done, the victory of life is won, the song of triumph has begun. Alleluia!” Easter is a glorious moment in the Christian year, for it celebrates resurrection—God’s victory over death. As Paul reminds us, our resurrection is rooted in the resurrection of Jesus. (1 Corinthians15:20)

The Gospel reading for this cycle of texts comes from either Mark 16 or John 20. Mark 16 gives us a rather abbreviated version of the Easter story. It may leave us wanting more, which is why many will turn instead to John 20, which invites us to encounter the risen Jesus through the witness of Mary Magdalene.

The reading from the Hebrew Bible comes from Isaiah 25, which doesn’t specifically speak of the resurrection of Jesus. However, it does speak of God’s victory over death. In what has the appearance of an apocalyptic vision, the prophet invites us to gather on the mountain for a feast of rich food and well-aged wines. The time for celebration is upon us. Only the best will do, so join the feast, and share in God’s bounty. The invitation is universal in extension. All peoples gather on the mountain, a vision of the future that is prominent in Isaiah. The passage doesn’t give a context for the celebration. God has won a victory for Israel, and so the people are ready to celebrate. It’s possible that chapters 24-27 are an insertion into the text at this point, though it might have been composed after the end of the exile. Whatever the context, the shroud of death that had hung over the people has been removed. God has swallowed up death and wiped the tears from the eyes of the people. So, now it’s time to share in a meal of communion where everyone is invited.

We read this passage on Easter morning, not because it is a proof text from the Hebrew Bible in support of the resurrection of Jesus, but because it helps us understand the promise of Jesus’ resurrection. It allows us to speak of the final triumph of life over death, which in the Christian vision of things, is rooted in the resurrection of Jesus. Therefore, using these words from Isaiah, we can declare that the shroud of death that sought to take hold of Jesus could not keep him in its grasp. In the words of that old Robert Lowery song: “Up from the grave he arose, with a mighty triumph o’er his foes; he arose a victor from the dark domain, and he lives forever, with his saints to reign. He arose! He Arose! Hallelujah! Christ Arose.” Yes, death tried to keep him imprisoned, but he broke the bonds, and leads the captive out of death’s prison.

This celebration is rooted in God’s provision of salvation. The nation waited for God. It required patience and persistence. If this was written in the post-exilic age, it reflects the Jewish sense of having been formed as a people in the crucible of the exile. We too have experienced being formed in the crucible of our age, when death seems to be a constant theme in our lives. War, violence in the streets and in schools, along with deaths from opioid and heroin overdoses. We experience this time of exile, holding on to God’s promise of salvation in Christ, which is wrapped up in the promise of resurrection.

When Paul wrote his first letter to the Corinthian Church he took up the question of resurrection, because some in the church wondered if they had missed something. Many had concluded that the final resurrection was just around the corner, and that none in their community would die. As time passed, they got worried. They needed reassurance, and that is what Paul offers in 1 Corinthians 15. In that chapter, he offers a lengthy discussion of resurrection to put their minds at ease. Stay faithful, he told them, for if Christ has been raised, so will you.
The opening words of the passage invite us to a great feast. There is a connection here for Christians to both the sacrament of Holy Communion and the promise of the heavenly banquet. There is a tendency to celebrate the Lord’s Supper with only a backwards glance. We remember Christ’s death, which was his invitation, but often fail to look forward to the heavenly banquet, which is what it prefigures. In that heavenly banquet, not only will be invited, but there will be more than a morsel of bread and cymbal full of juice on the menu. Only the best will do.

Death still claims us. We are mortals (physically), and so death is a natural part of life. We are born, we mature, and finally, we die. Even the stories of Jairus’ daughter (Mark 5) and Lazarus (John 11), in which Jesus raises a person from the dead, doesn’t promise unending life. None of us are immortal. Yet, there is the eschatological promise that death has lost its grip. Death is not the final word, and so we gather on Easter to celebrate Christ’s victory over death and look forward to sharing in the heavenly banquet, where rich food and aged wine will be served.